Mariah Carey is right to fight 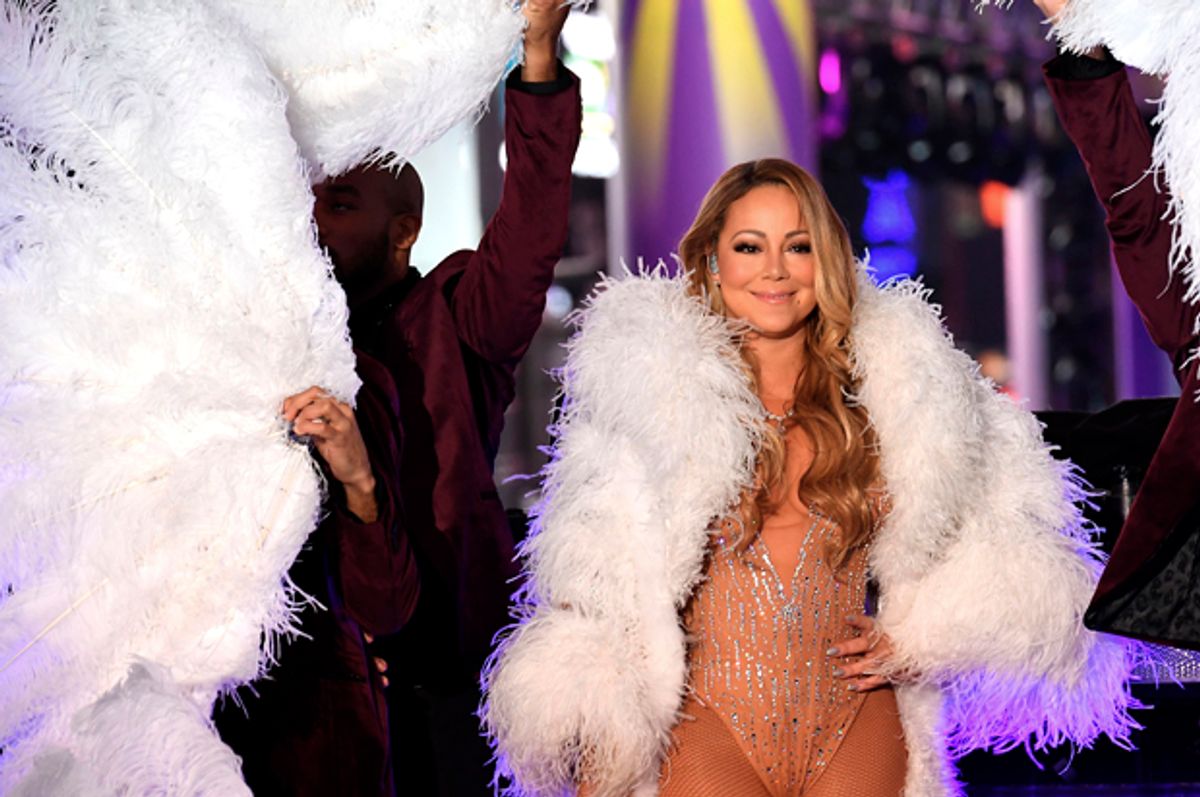 Three days into 2017, Mariah Carey's headline-grabbing appearance on "Dick Clark's New Year's Rockin' Eve" remains a hot topic of conversation. At issue was her obvious lip syncing, as well as a non-performance of the hit "Emotions." As a backing track featuring elements of the latter tune started playing, Carey didn't sing along. (She was supposed to: The track was clearly designed to let her add the meat of the song.) In fact, the pop diva seemed to be having technical issues. At one point, she said "I can't hear," while at another juncture, she stated "Get these monitors on, please." She made several half-hearted attempts to add her parts and interact with her dancers—"I'm trying to be a good sport here," she noted—but mostly strutted around the stage and tried to make the best of things.

"Shit happens," she tweeted later, along with a GIF of her shrugging her shoulders and a weary-faced emoji. "Here's to making more headlines in 2017." Ever since the performance, Carey's team and Dick Clark Productions, or DCP, which produced the show, have been trading comments and accusations in the press. The pop star's camp maintains that the culprit was issues with her in-ear monitors, and claims that DCP "sabotaged" the performance for ratings. DCP has adamantly refuted the latter claim, and instead says Carey skipped soundcheck, something her reps also deny.

Still, in an interview with Entertainment Weekly, Carey’s manager, Stella Bulochnikov, pulled no punches while telling their side of the story. "She should have walked off and thrown the mic at somebody’s head — that would have been a great moment," she said, before adding that she called producer Mark Shimmel after the show to ask what happened. "He said, ‘I just talked to my guys and I confirmed her in-ears didn’t work. Couldn’t she just wing it?' I’m like, 'What are you talking about ‘winging it’? Are you on glue?'"

Gawker published an article titled "Lip-Sync Malfunction Forces Katy Perry to Use Her Own Voice to Sing" after a backing track mishap, while Taylor Swift's shaky 2010 Grammys performance with Stevie Nicks drew scathing reviews. These negative reverberations often linger long after the news cycle loses interest. Exhibit A is Ashlee Simpson's disastrous 2004 Saturday Night Live performance: A backing vocal track for her song "Pieces Of Me" accidentally started playing as her band launched into a different song. Paralyzed, Simpson unleashed some silly dance moves instead — and has spent the rest of her career living the moment down.

Janet Jackson's infamous "wardrobe malfunction" (a.k.a. "Nipplegate") during her 2004 Super Bowl halftime performance with Justin Timberlake cast an even longer shadow. Her songs and videos were allegedly blacklisted from certain channels; her then-new album, "Damita Jo," debuted at No. 2 on the Billboard charts, but sold fewer copies than most of her previous solo records to date; and she was basically disinvited to that year's Grammy Awards. Even Michael Powell, who was the FCC Chairman in 2004, eventually admitted Jackson took the brunt of the fallout. "I personally thought that was really unfair," Powell told ESPN Magazine in 2014. "It all turned into being about her. In reality, if you slow the thing down, it's Justin ripping off her breastplate."

Post-Super Bowl debacle, Timberlake fared far better. McDonald's didn't drop him as a spokesperson, for example, and he's remained one of the world's biggest entertainers. "I probably got 10 percent of the blame," he told MTV. "I think America's probably harsher on women, and I think America is, you know, unfairly harsh on ethnic people."

Despite his awkward choice of words, Timberlake isn't wrong about the latter sentiment: Artists of color also seem to attract an inordinate amount of criticism for comparatively minor slip-ups or perceived indiscretions.

When M.I.A. briefly but deliberately flipped off the camera during Madonna's 2012 Super Bowl halftime performance, the NFL sued her for $1.5 million, and then later amended the claim and asked for an eye-popping additional $15.1 million in damages. (The parties later settled, with terms undisclosed) Kanye West had vocoder issues during a 2008 "Saturday Night Live" performance of "Love Lockdown," which led to plenty of eye-rolling and nasty words. And then there's Beyoncé, who was roundly criticized for lip syncing "The Star Spangled Banner" at Barack Obama's 2013 inauguration: She not only felt compelled to apologize and promise she would be singing live at her Super Bowl performance that year — but she then belted out an a cappella version of the song right then and there at a press conference, just to shut down naysayers once and for all.

Pop, rap and hip-hop artists are constantly the victims of an authenticity witch hunt, as critics look for ways to undermine their talents. Criticizing these musicians for lip syncing is another way of saying these artists can't sing or have no talent. This mindset is partly a function of how many consider genres such as pop, rap and hip-hop; inferior to rock 'n' roll. But it also illustrates the double standards applied to artists operating within these genres. After all, rock-oriented musicians seem to get more of a pass for performance mistakes.

The Red Hot Chili Peppers' instruments were unplugged during their 2014 Super Bowl performance, which caused an uproar — and provoked bassist Flea into writing a very long explanation as to why — but the band took no discernible commercial hit. In 2007, Van Halen unleashed a trainwreck version of the hit "Jump" during a North Carolina concert, but experienced few repercussions from the performance aside from brief outrage and perpetual online snickering. Even the FCC isn't equitable with its punishments: The commission declined to levy a fine after U2's Bono said winning a Golden Globe Award was "really, really fucking brilliant" live on TV.

Getting upset about lip syncing is even more hypocritical when you consider artists routinely play and sing to tracks during national TV performances. The archives of the long-running U.K. series "Top Of The Pops" are filled with goofy clips of artists miming to hit songs. For example, in 1991, Kurt Cobain affected a bizarre croon during Nirvana's performance of "Smells Like Teen Spirit."  Other acts relish taking liberties with performances where lip syncing is required. In 1980, John Lydon of Public Image Ltd. deliberately refused to pretend to sing the band's songs "Poptones" and "Careering" on "American Bandstand." Lydon's petulant silence and stance — he literally sat down on the stage and looked bored — is considered defiantly punk rock. In a nod to the absurdity of fake live performances, both Iron Maiden and Muse have playfully swapped instruments during TV appearances.

Acts that opt to comment on the absurdity of backing tracks operate from a place of privilege, however; they know a joking performance likely won't draw ire. That these performances have tended to be by male musicians is no accident. In fact, that Carey's New Year's Eve performance is automatically considered terrible rather than elaborate performance art also illustrates the double standard applied to women. No matter that she kept her poise, didn't panic and also stayed onstage during what must have been a mortifying experience. Instead, her artistic talent and bona fides are called into question, and she isn't praised for gracefully overcoming unexpected technical issues.

Of course, Carey was really in a no-win situation on New Year's Eve. Had she started singing along full-blast to the songs without being able to hear cues, it would have made her look ridiculous, and may have spawned accusations that she no longer has a voice. Considering that she and Lionel Richie have an extensive North American co-headlining tour planned in 2017, this would have been disastrous. Her response — to square her shoulders and turn up her well-honed diva-ness — was the best option. "It just don't get any better," Carey remarked as her time onstage mercifully ended. With a sassy look on her face, she turned and left the stage through a halo of feather plumes.