The Alabama Republican wasn't confirmed as a federal judge because of past comments, yet Trump's named him top cop 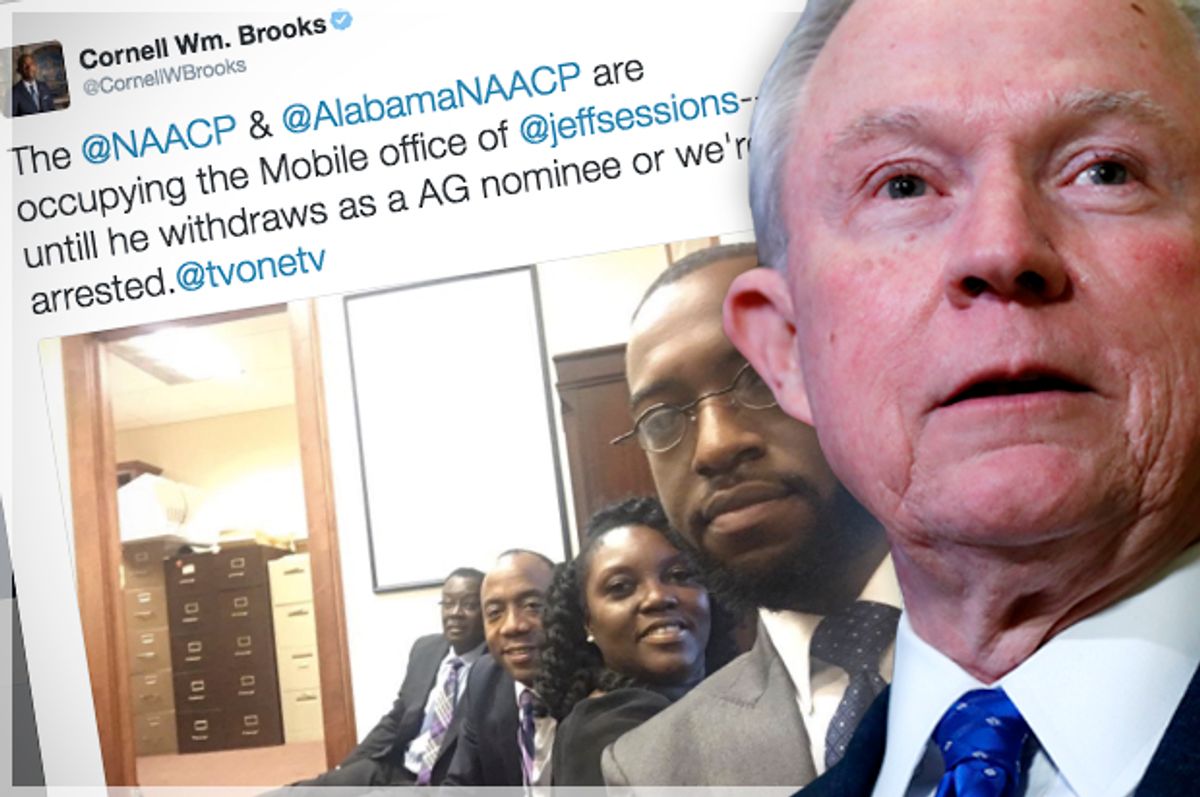 NAACP president Cornell Brooks and the head of the group's Mobile branch occupied the Alabama senator's Mobile office and refuse to leave until he withdraws from consideration as Trump's attorney general or the group gets arrested.

Protests and simultaneous press conferences were held Tuesday at all five of Sessions' Alabama offices.

In an interview, Brooks encouraged friends and supporter make their opposition known to this nomination by calling their senators and to "also engage in thoughtful civil disobedience."

"This is not some kind of civic game," Brooks insisted on the same day more than 1,100 law school professors in 48 states sent a letter urging the Senate to reject Sessions' nomination.

Sessions, a U.S. attorney in Mobile in the mid-1980s, was nominated by President Ronald Reagan to become a federal judge but failed to gain confirmation from Congress in 1986 following public accusations that he had made racist remarks. Former colleagues said he called civil rights groups, including the NAACP, “un-American” and “communist-inspired,” but said he was “okay” with the Ku Klux Klan until he learned that some members smoked marijuana.

"As a matter of conscience, the NAACP has chosen not to remain silent on this critical matter," Birmingham NAACP head Hezekiah Johnson said outside Sessions' Senate office in the city on Tuesday, AL.com reported.

Citing Sessions' history of opposing civil rights causes, Johnson said the civil rights organization seeks to focus attention on just what a disaster Sessions would be for civil rights in this nation.

"Our main concern is centered around the reality of voter suppression. We have found no evidence of his ability, past or present, to be impartial and unbiased as the chief law enforcement officer of the United States of America, especially in the areas of civil rights, voting rights and equal protection under the law," Johnson said of Sessions.

When he was U.S. Attorney in Mobile, Sessions’ office brought indictments over allegations of voter fraud in a number of Black Belt counties, an area in Alabama named for the color of the soil but with a majority black population. Sessions' office even filed voting fraud charges against a long-time civil rights activist who advised Rev. Martin Luther King, Jr. and helped lead the "Bloody Sunday" march for voting rights in Selma. Three individuals charged with voting fraud by Sessions' office, known as the Marion Three, were trying to assist poor, elderly and illiterate voters in casting ballots. A judge eventually threw out more than half of the charges brought against the black civil rights activists for lack of evidence before the jury received the case.

Brooks told Salon that the NAACP plans to present Sessions' abysmal record on voting rights, criminal justice, and immigrant rights to Republican senators in an effort to scuttle his nomination, just as Sessions' 1986 nomination was blocked by congressional Republicans.

"We are not saying the president isn't due to his choice," Brooks made clear. But, he argued to Trump and Republican lawmakers, "your constituents did not elect you to support the expansion of an unconstitutional policy, namely stop-and-frisk."

Sessions "nomination in 1986 looked to be a sure bet," Brooks noted to Salon, before arguing to Republican lawmakers that"You are not going to lose any votes by standing up and doing what was done in 1986."

Hearings on Sessions nominations are set to begin next week.

"Don't count folks out," Brooks told Salon from Sessions's office late Tuesday afternoon. He said he and the other protesters expect to be arressted shortly after 5pm when Sessions' office closes for the day.