Donald Trump took to Twitter to comment on North Korea, without a full understanding of the geopolitics 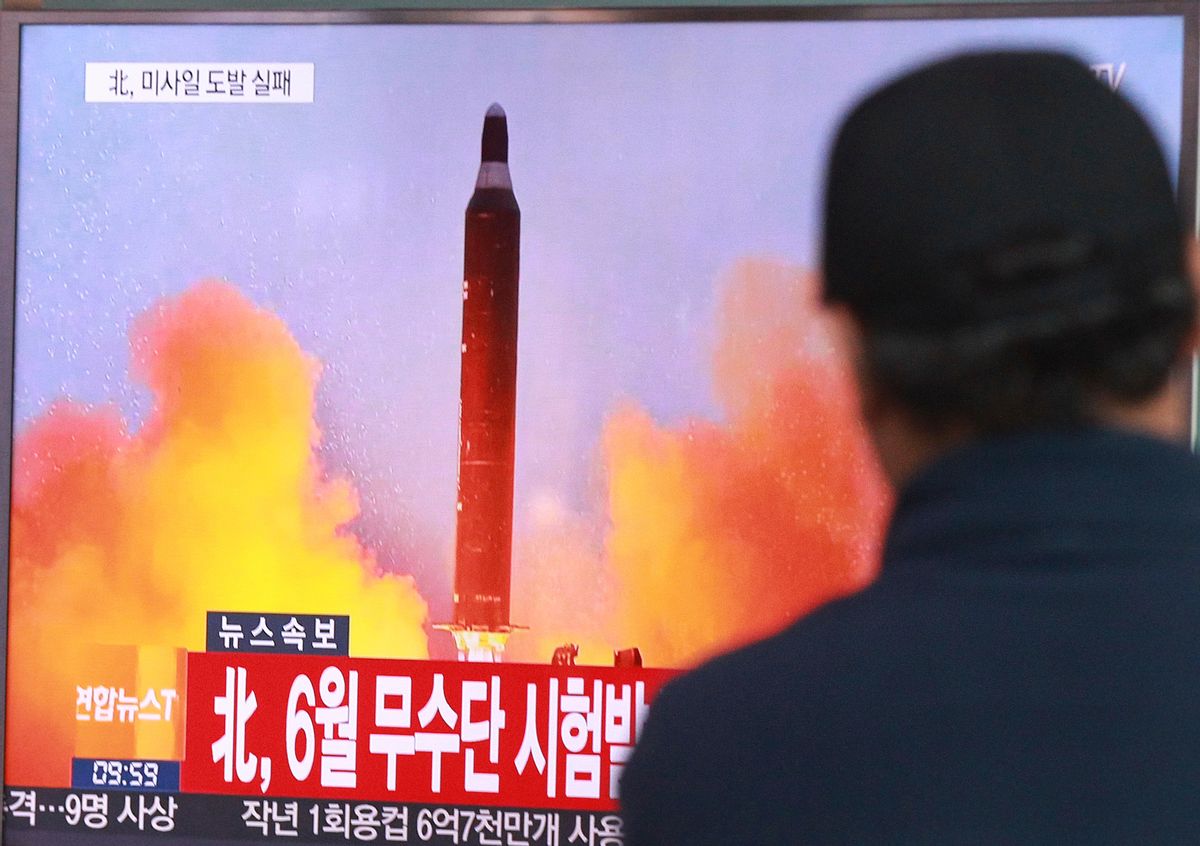 FILE - In this Oct. 16, 2016, file photo, a man watches a TV news program showing a file image of a missile launch conducted by North Korea, at the Seoul Railway Station in Seoul, South Korea. U.S. President-elect Donald Trump took to Twitter on Tuesday, Jan. 3, 2017, to vow that North Korea’s push to develop a nuclear weapon capable of reaching parts of the United States “won’t happen.” It may already have. The letters read "North attempted to fire a mid-range Musudan missile in June." (AP Photo/Ahn Young-joon, File) (AP)
--

SEOUL, South Korea — U.S. President-elect Donald Trump took to Twitter to vow that North Korea won't develop a nuclear weapon capable of reaching parts of the United States. But it might already have done so.

That would allow Pyongyang to threaten U.S. forces stationed in Asia and add teeth to its threat last year to use nuclear weapons to "sweep Guam, the base of provocations, from the surface of the earth."

Guam is a strategically important U.S. territory in the Pacific. Some experts see the U.S. mainland as potentially within reach in as little as five years if North Korea's nuclear progress isn't stopped.

Trump's tweet on Monday night U.S. time was in response to North Korean leader Kim Jong Un, who said Sunday in his annual New Year's address that preparations for launching an intercontinental ballistic missile have "reached the final stage." He did not explicitly say a test was imminent.

Trump tweeted, "North Korea just stated that it is in the final stages of developing a nuclear weapon capable of reaching parts of the U.S. It won't happen!"

Trump counselor Kellyanne Conway said Monday on MSNBC that the world should be grateful Trump told millions of people that, where the North Korean threat is concerned, "he intends to stop it."

North Korea, poor, suspicious of outsiders and governed by a third-generation dictator, is used to being underestimated and mocked. Few believed it could build a nuclear program that would keep U.S. presidents since the early 1990s up at night.

Armed to the teeth, acutely bellicose and not afraid to push tensions on the Korean Peninsula to the brink, Pyongyang could be among Trump's top foreign policy challenges.

Here's a look at how close North Korea may already be to proving Trump's tweet wrong:

There's a general consensus that Pyongyang has made significant nuclear and missile progress under Kim, who took over after his father, Kim Jong Il, died in late 2011.

Kim has conducted three of the country's five total nuclear tests, including two last year. Propaganda out of Pyongyang makes clear that North Korea views nuclear weapons as essential to keeping at bay U.S. and South Korean forces it says are intent on its destruction.

Some U.S. experts believe North Korea may have enough fuel for about 20 bombs, with a half dozen more possible each year.

Fuel is one thing; it's much more difficult to develop the technology needed to build bombs small enough to fit on missile tips.

Each new nuclear test, however, pushes the North another big step toward its goal of an arsenal of nuclear missiles capable of hitting the U.S. mainland.

Outsiders don't know for sure whether North Korea can arm any of its ballistic missiles, regardless of range, with nuclear warheads yet.

But Siegfried Hecker, a leading North Korea nuclear expert, wrote after last year's September nuclear test that outsiders should now assume that Pyongyang has "designed and demonstrated" atomic warheads that can be placed on short- and possibly medium-range missiles.

North Korea may deploy a "working, nuclear-tipped ballistic missile" by 2020, according to another expert, Euan Graham, director of the International Security Program at the Lowy Institute.

North Korea has an arsenal of short-range Scuds and mid-range Rodong missiles, and some South Korean experts believe those can already be armed with nukes.

While there's not a consensus, some South Korean experts also believe the North can place a nuclear warhead on the more powerful mid-range Musudan missile, which could target Guam, about 3,000 kilometers (1,900 miles) away. Last year, after a string of failures, North Korea launched a Musudan missile that some experts considered a success.

Kim Jong Un has already conducted more ballistic missile tests, including from submarines, in his short time in power than his father did during his entire 18-year reign, Graham wrote last year.

This has allowed "refinements" in solid propellants, road mobility and experiments with vertical launches to high altitudes that could complicate U.S. and Japanese missile defense systems' efforts to intercept, Graham wrote.

Even if North Korea can fit a nuclear weapon on a missile, it has yet to meet the even greater challenge of building a nuclear-tipped ICBM capable of hitting the U.S. mainland.

As with the nuclear detonations, each new rocket test puts the North closer to having a nuclear missile that can target the U.S. mainland. Hecker estimates that it may take North Korea five to 10 years to succeed.

Another tweet from Trump criticized China, North Korea's most important ally, for not doing more to discourage its nuclear weapons program: "China has been taking out massive amounts of money & wealth from the U.S. in totally one-sided trade, but won't help with North Korea. Nice!"

While Beijing has publicly reprimanded Pyongyang after nuclear tests and has agreed to rounds of U.N. sanctions against the North, critics say China hasn't done enough to tighten economic pressure.

Hours after Trump's comments, the Chinese state-run Global Times newspaper accused him of "pandering to 'irresponsible' attitudes." It said Pyongyang's nuclear program "stokes the anxieties of some Americans" who blame China rather than looking inward.

Pyongyang has a habit of taking a swing at new U.S. presidents, so Trump may not have long to wait before getting a fresh look at North Korean nuclear or missile technology.

Or both: In 2009, a newly inaugurated Barack Obama was greeted with a nuclear test and a long-range rocket launch.

Foster Klug is AP's Seoul bureau chief and has covered both Koreas since 2005. Follow him at www.twitter.com/apklug