Does impeachment begin now? The case for building the end of Trump's presidency before it even starts 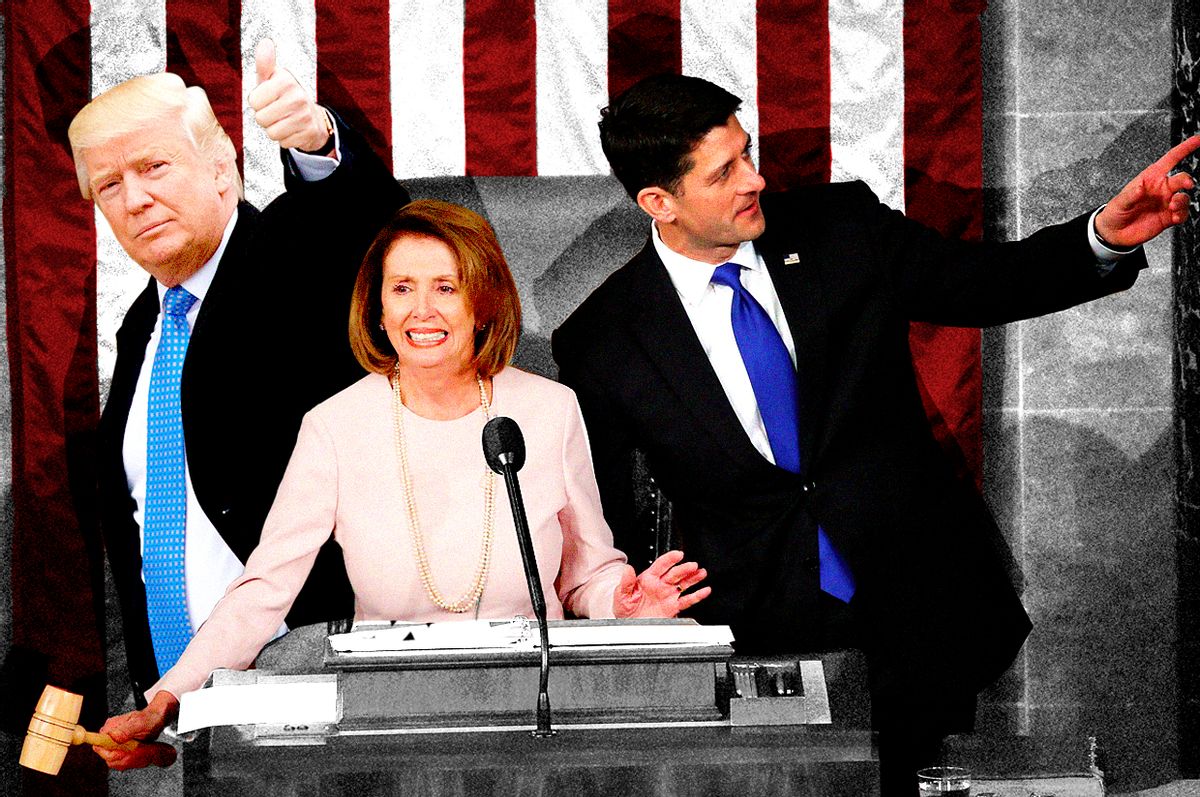 If anyone thought that the new Congress might be a moderating force on the Donald Trump wrecking crew, the latest news from Capitol Hill isn't reassuring. This headline for a story by David Weigel in the Washington Post says it all:  Claiming mandate, GOP Congress lays plans to propel sweeping conservative agenda.

When the 115th Congress begins this week, with Republicans firmly in charge of the House and Senate, much of that legislation will form the basis of the most ambitious conservative policy agenda since the 1920s. And rather than a Democratic president standing in the way, a soon-to-be-inaugurated Donald Trump seems ready to sign much of it into law.

After a huge public outcry this week, even Trump questioned the timing of the new Congress' first initiative, which was to roll back certain ethics procedures. (He wasn't actually against the rollback, just thought it was premature.) There are also some encouraging signs that repealing the Affordable Care Act may not be quite as easy as Republicans had hoped, which could tangle them up with their followers all over again. If they can be similarly stopped or slowed from enacting the rest of their agenda, we might just get through this thing.

As Weigel reports, however, the larger agenda has been in the planning stages for a long time:

In 2012, Americans for Tax Reform’s Grover Norquist described the ideal president as “a Republican with enough working digits to handle a pen” and “sign the legislation that has already been prepared.” In 2015, when Senate Republicans used procedural maneuvers to undermine a potential Democratic filibuster and vote to repeal the health-care law, it did not matter that President Obama’s White House stopped them: As the conservative advocacy group Heritage Action put it, the process was “a trial run for 2017, when we will hopefully have a President willing to sign a full repeal bill.”

Paul Ryan asked his caucus a year ago, "Assume you get the White House and Congress. Come 2018, what do you want to have accomplished?" They basically want to accomplish a legislative revolution, virtually none of which was discussed in the last campaign.

Trump can at least hold a pen. As long as congressional Republicans let him strut around taking credit for "getting things done," he'll be happy to sign anything they put in front of him. Remember, Donald Trump Jr. reportedly told John Kasich's aides, as he was trying to recruit the Ohio governor for the ticket, that Kasich would be the most powerful vice president in history, pretty much in charge of everything, because Trump would be busy "making America great again." He has no interest in getting into the weeds of governing, so he's happy to sign off on Mike Pence's dream platform.

So what are Democrats to do with this? It's already going to be an overwhelming task to fight off Trump's worst nominees, battle back legislation that's coming from 20 different directions and expose the mountain of scandals that are quickly piling up. The Trump train wreck is already creating a chain reaction of one explosion after an other.

There are many interest groups starting to mobilize against the basket of deplorable nominees, none of whom are being adequately vetted by the transition team, and are also failing to cooperate with congressional requests. Other interest groups are trying to find some reasonable division of labor to resist the flurry of odious legislation, from healthcare to financial reform to deregulation and reversal of environmental rules, the Republicans have planned. But nobody knows exactly how the House and Senate Democrats are going to react. Will they try to cut deals for some crumbs in the legislation and then stand beaming behind the president at his signing ceremony, lending a bipartisan sheen to the carnage? If history is any guide it's certainly possible.

There are some creative strategic thinkers out there, however, who are looking at the big picture and coming up with some exciting propositions. For instance, Robert Kuttner wrote this provocative piece for the Huffington Post, advocating for a group of experts, preferably bipartisan, to begin seriously putting together the case for impeachment:

There is only one constitutional way to remove a president, and that is via impeachment. What’s needed is a citizens’ impeachment inquiry, to begin on Trump’s first day in office.

The inquiry should keep a running dossier, and forward updates at least weekly to the House Judiciary Committee. There will be no lack of evidence. The materials should be made public via a website. The inquiry should be conducted by a distinguished panel whose high-mindedness and credentials are, well, unimpeachable.

There needs to be a parallel public campaign, pressing for an official investigation. For those appalled by Trump, who wonder where to focus their efforts, here is something concrete ― and more realistic than it may seem.

He goes on to enumerate the high crimes and misdemeanors in which Trump is already implicated, beginning with the massive corruption inherent in his continued ownership of a privately held international company, the details of which he refuses to divulge. There are also his strange and uncharacteristic fondness for Vladimir Putin and his untrammeled nepotism, just for starters.

Some people are reflexively opposed to making such a strong statement so early in the administration. But Trump is already committing impeachable offenses, and dealing with someone like this requires being well prepared to take advantage of any openings to stop him. It is certainly what the Republicans would do if the shoe were on the other foot. In fact, it is exactly what they were planning to do.

The point is to keep the pressure on and keep the focus on Trump's ongoing corruption scandals. This will not take the place of resistance to the Pence and Ryan express, which is vital. But Democrats have got to walk and chew gum on a high wire blindfolded in this moment, and this is the kind of planning they will need if we are to survive the Trump era.