This power move by rank-and-file Republicans, however well-intentioned, looked self-serving to appalled citizens 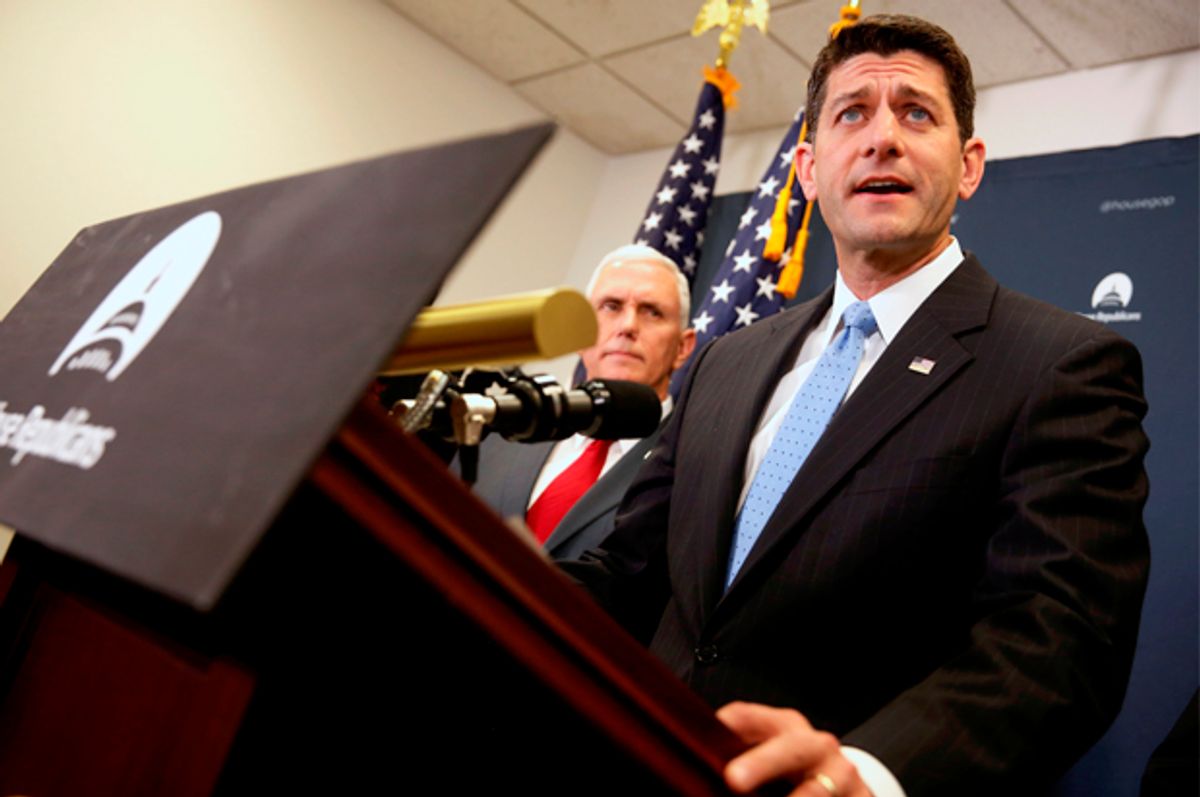 Mike Pence joins House Republicans, including Paul Ryan, to speak to reporters after meeting with the Republican House caucus at the U.S. Capitol, January 4, 2017. (Reuters/Jonathan Ernst)
--

If there’s one silver lining in Tuesday’s political fiasco around the House Office of Congressional Ethics (OCE), it’s that the American people helped rein in the exuberance of House Republicans, whose move to swing so far away from questionable prosecutorial bureaucracy landed them in a cloud of moral ambiguity.

Political reporters like Washington Post reporter Bob Costa and others said that while a mid-morning Tweet from President-elect Donald Trump helped move the needle, it was an outpouring of public frustration at the proposal from some GOP members to hastily alter the OCE in the wake of Republicans’ November victory with promises to “drain the swamp.” Thousands of angry calls and emails poured into Capitol Hill from voters within these members’ own districts and beyond. Even as our country was forced to choose between the most unpopular and least-trusted presidential candidates in modern history, they were finally fed up with this move and finally fought back. Voters chose Trump because they wanted a shock to the system — not the system to provide further insulation for itself.

Yet after years of partisan witch hunts and investigations against conservatives and business leaders by agencies like the Consumer Financial Protection Bureau and the Internal Revenue Service, House Republicans wanting OCE changes were fed up with some 100 OCE investigations since it was formed in 2008, only a third of which have been referred to the House for full investigation.

They were looking to reform what The Wall Street Journal editorial board describes as “a roving investigator that can publish reports with details that may not be accurate and can damage a reputation with little or no proof of guilt." From the WSJ editorial:

Evidence of wrongdoing in travel, campaign finances and other matters can be handled by the House Ethics Committee, and if necessary law-enforcement agencies. Both are politically accountable, unlike the independent office. Anonymous complaints are especially insidious, as subjects of an investigation may not know who is accusing them—and the accuser may never have to press his case. Nixing the communications director is also worthy: A press secretary is nothing but a designated leaker. The office is a great tool for government “watchdog” groups that are progressives posing as transparency enthusiasts, which renders the proceedings even less fair.

However justified some of these OCE changes may, especially the concern about violations of members’ due process, they were inside baseball that looked terribly incestuous to Americans outside the Beltway, especially as one of the new Congress’ first acts. That’s why Trump urged Republicans to focus on bigger issues like tax reform and healthcare.

And it’s also why the move was opposed by Speaker Paul Ryan and House Majority Leader Kevin McCarthy (R-Calif.), who called an emergency House GOP conference Tuesday around noon to scrap the proposed. It was right for Ryan, McCarthy and Trump to oppose such rapid alterations to the OCE, and it was good to see Trump step up and flex his muscles in this area. The question, however, is whether Trump will show restraint on executive power, unlike the current White House occupant.

What’s interesting is that the move by these anti-OCE House Republicans, including some who had been investigated by the OCE, reportedly caught the House GOP leadership off guard. However justified these House members’ intentions were, they were far less important than the commensurate outcome. The outcome: Americans were appalled that their top agenda item would be one of such blatant self-service.

Perhaps the episode will serve as a learning moment for rank-and-file House members to collaborate with both their own leadership and the White House if they hope to successfully enact a robust agenda to improve the lives of We The People rather than their own private interests. That is the question at the heart of public service.