Taking the Portland out of "Portlandia": It's less about place than it is about personalities 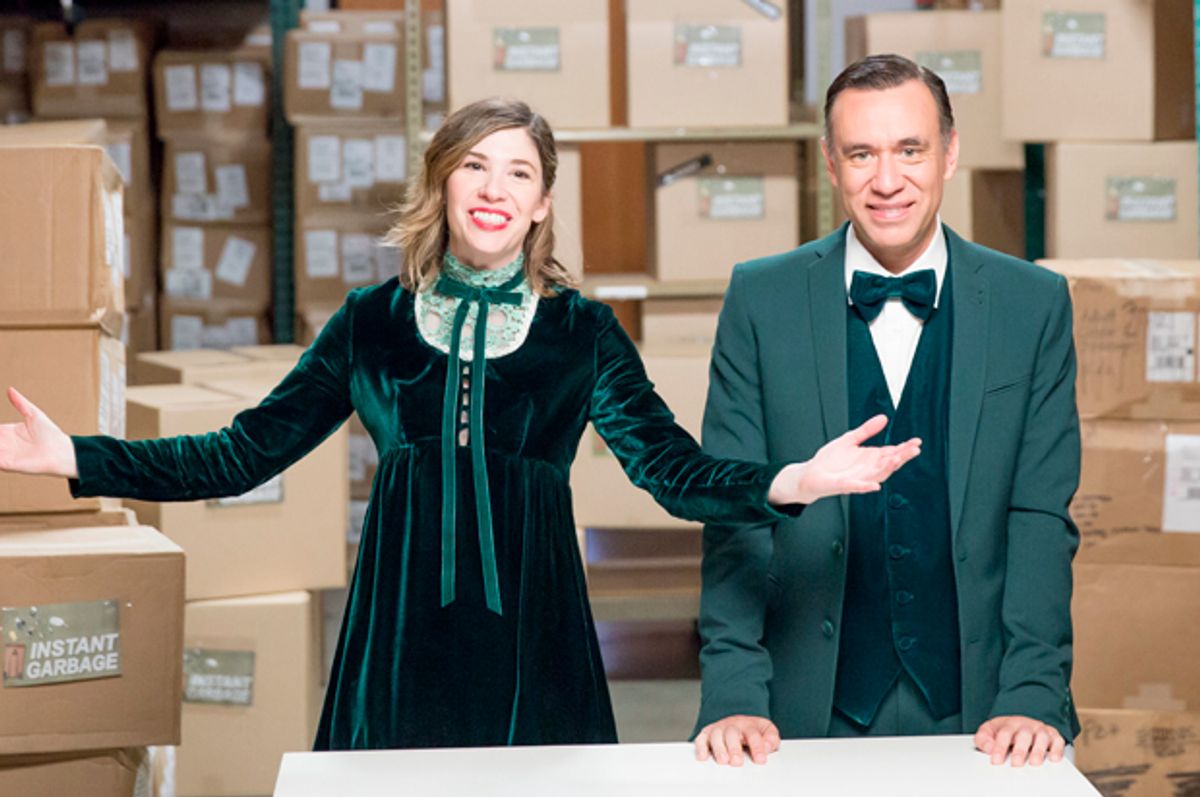 Backlash is an inevitable stage of the trendiness lifecycle. Towns know that. Hipsters are all too familiar with that truth. Fred Armisen and Carrie Brownstein, the co-creators and stars of IFC’s “Portlandia,” have gotten that message, too.

Prior to its seventh season, which kicks off Thursday at 10 p.m., the duo experienced a widely-reported shock of cultural counterblast. Feminist bookstore In Other Words locked its doors to its “Portlandia” alter-ego Women and Women First declaring its enmity for the series in a scathing anti-“Portlandia” manifesto on its blog.

They’re far from alone in that adverse sentiment.  Ask any number of locals to share their feelings about the show, and reactions range from a shrug to bitter rage blackouts. Anecdotal evidence isn’t scientific, of course, but when it comes to “Portlandia,” it appears that the Rose City sauntered over the thin line between love and "meh," if not outright loathing for it, some time ago.

Think of it as the price of success. Once an edgy little comedy that occupied the outer rings of cable, “Portlandia” infected the mainstream and went viral. It arrived at a point in time when lumberjack facial hair, artisanal condiments and the mollycoddling of high-end urbanite consumption were prime for parody.

But instead of deflating these insufferable markers of hipster privilege, it exploded them. Portland used to be somewhat unique in its weirdness, what with its craft donuts, small-batch breweries and a cost of living that could be sustained on a barista's take-home earnings. Nowadays, America is awash in craft beer flavors and ironic taxidermy and restaurants that spell out the provenance of everything down to the hot dogs on the kid’s menu. Everybody wants to put a bird on it. Armisen and Brownstein have lent their quirk to Old Navy ads. Those beards aren’t going anywhere — although after this week’s episode, some may be recycled into children’s toys. If the show has proven anything, it’s that the outlandish can become utterly typical.

“Portlandia” has one more season after this one before it ends, but season 7 already feels as if the sketch show is settling into dusty comedic patterns and taking the audience’s affection for familiar personalities and recycled bits for granted. It has always been a series composed of disjointed slices, some funnier, more ambitious and clever than others. This time around, there are many more blocks of sidewalk between its visits to brilliance than in past seasons.

When "Portlandia" hits its target, however, it still produces a tremendously entertaining half-hour. The beard toy sketch, for example, is at once hilarious and utterly disgusting, and gets extra points for incorporating “Arrested Development” creator Mitch Hurwitz in a cameo. Stronger than this is a recurring bit that starts in the second episode, following a pair of men attempting to launch a male pride movement.

This running joke captures the essence of “Portlandia” at its finest.  Launching with a testosterone loaded rock video asking “What About Men?” the duo goes on to confront such P.C. castrations as a café’s seasonal offering of vegan Gender-Neutral Gingerbread People.

OK. Somewhere in the real world, there is a coffee shop that serves that cookie. A number places probably do, in fact. That’s the appeal of “Portlandia,” but it’s also exemplifies why it feels less special than it used to. The current season reveals that it is now less of a show about place, or the funhouse vision of a place, than it is about character. "Portlandia's" soft comedy strives to feel universal, provided you have the means to have been to places that cater to your every whim. These days, though, Armisen and Brownstein may be assuming that viewers love their characters enough to accept their well-established shtick.

Women and Women First bookstore owners Candace (Armisen) and Toni (Brownstein) may have been forced out of their workplace, but they still find a way to be vexing to one another and the people around them. Free-spirited couple Peter (Armisen) and Nance (Brownstein) are finding new dietary obsessions. High maintenance Nina (Armisen) finds a way to both spoil and ruin her patient lover Lance (Brownstein). These are Portland residents, but if the city were to somehow vanish, Armisen and Brownstein wouldn’t have to change a thing about them.  The gang's all here. But they could be living in any number of enclaves.

The well-meaning if myopic particularity of these characters reflects our insistence on personalization. You don’t need to live anywhere in particular to experience that – it’s already being delivered right to our doorsteps.

It’s difficult to guess whether Portlanders will be relieved to know that “Portlandia” seems less about their town these days, or if that thought is only more enraging.

Cities play the role of silent characters on countless series, but some burgs are more resilient to fictionalized parody than others. And television series, meanwhile, can be seen as agents of incremental destruction. All it takes is one hit comedy to ruin that hidden treasure of a coffee shop you once loved. If you live in a large city – New York, Los Angeles, Chicago — there’s always another place for locals  to discover and claim for their own.

Smaller cities aren’t as lucky. Seattle culture transformed tremendously following the grunge era and continues to morph thanks to the influx of tech industry workers. Portland is experiencing growing pains of its own, some of which is being blamed on this show’s popularity. But that’s not entirely true.  The town’s friendliness, creative culture, mild climate and easy livability were siren calls to Californians in the ‘90s. One could say the changes began surfacing then. Gentrification, the tech boom and its decreased affordability are its main afflictions now.

No, “Portlandia” didn’t ruin Portland. But the show’s spiritual decoupling from the town that inspired it definitely signals that it’s on its way out.