The lady vanishes: "Sherlock" and the case of the disposable women

In the story of the platonic and fraught affection Sherlock Holmes has for John Watson, a wife was a third wheel. 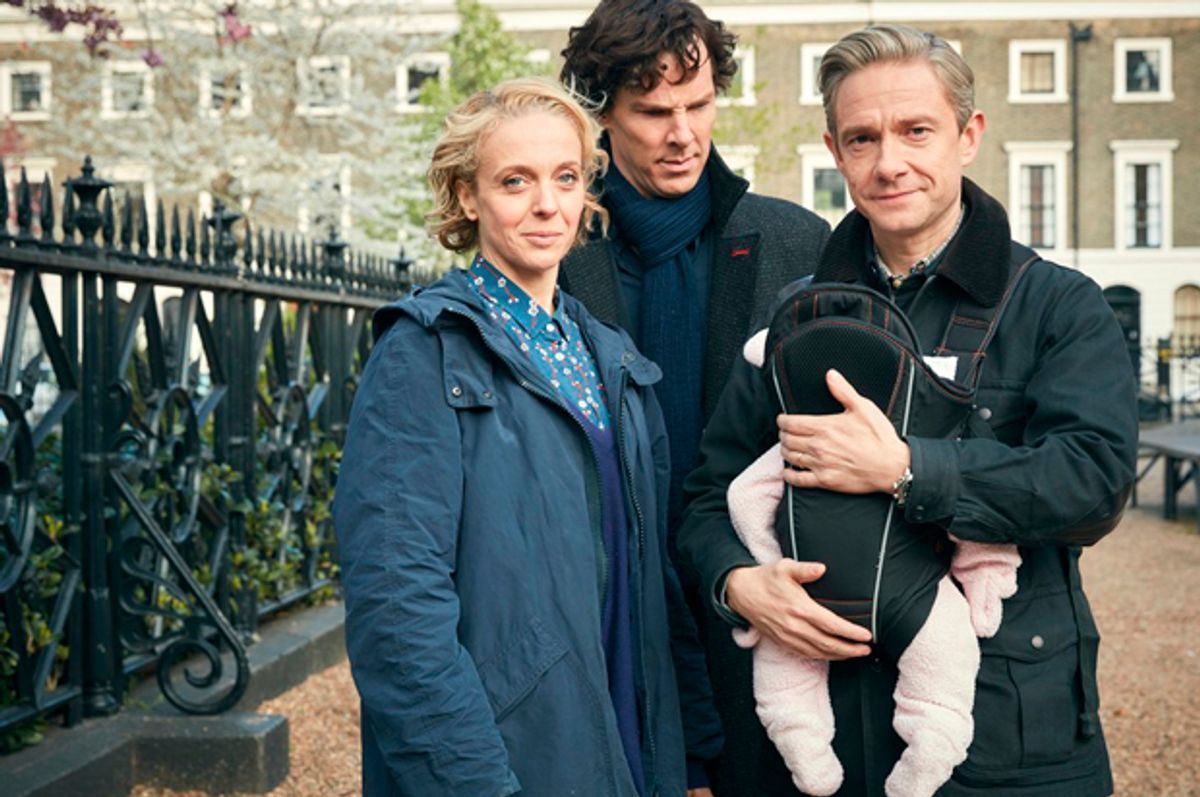 Warning: This story discusses specific plot points from the fourth season premiere of “Sherlock,” including a major spoiler. If you have not seen the episode and choose to continue reading, that’s on you. Consider yourself warned, loves.

“When does the path that we walk on lock around our feet?” asks Sherlock Holmes (Benedict Cumberbatch) in the final moments of “The Six Thatchers,” the long-awaited fourth season premiere of “Sherlock” that aired Sunday on PBS member stations in the U.S. and BBC One in the U.K.

Cumberbatch’s curly-haired detective poses this question as he ponders the nature of destiny, action and consequence. Can some events thought to be inevitable, like death and heartbreak, be avoided? Sherlock has no answer. But like so many “Sherlock” episodes, the audience was left with a lot of questions, the central one being: What was the point of Mary Watson (Amanda Abbington) after all?

“Sherlock” devotees have waited for Steven Moffat and Mark Gatiss to continue their modern take on the adventures of Arthur Conan Doyle’s detective since 2014, when Sherlock upended everything by killing a man in cold blood in “His Last Vow.” Like most murders committed in the heat of the moment, Sherlock’s act was a crime of passion resulting from being defeated. More specifically he did it for love — the love of his friend, John Watson (Martin Freeman), but also for the love of Mary.

To those who know Conan Doyle’s version of Sherlock Holmes, such an idea goes counter to the character’s profile. But the contemporary Sherlock sculpted by co-creators and showrunners Steven Moffat and Mark Gatiss is a man who loves deeply, even if he refers to the emotion as “human error”.

Abbington’s Mary was introduced in the season three premiere, “The Empty Hearse,” as evidence that John had moved on after Sherlock faked his death, appearing plunge off of a rooftop in the season two finale “The Reichenbach Fall.”

The modern Mary was not simply marriage material, as Conan Doyle originally wrote her. The author’s Mary Morstan neither added greatly to the stories nor detracted from them. Even her death, the cause of which is still unknown, occurs between tales.

When “Sherlock” viewers meet Mary in 2014’s “The Empty Hearse” the detective’s initial appraisal told us, among other things, that she wore a size 12, that she’s a clever romantic . . . and a liar. That last word bounced around throughout the season: Liar, liar, liar.

Mary’s lie was spectacular. A blackmail scheme revealed that she was a retired professional assassin, and she stood as evidence that John, for all of his objections to Sherlock’s outrageousness, can’t help running toward danger.

Mary, meanwhile, could not outrun it. In the way of so many other episodes, “The Six Thatchers” begins as an odd mystery concerning the inexplicable destruction of a series of cheap plaster busts of former British Prime Minister Margaret Thatcher. We eventually discover that they may be in some way connected to a case Sherlock’s brother Mycroft (Gatiss) gave him long ago, concerning a lost treasure known as the black pearl of the Borgias.

This was actually the central prize of the original story upon which this episode was based called “The Adventure of the Six Napoleons.” However, in his “a-ha” moment, Sherlock does not discover the mislaid gem but the drive containing information about Mary’s past, which he thought had been destroyed. This put Mary in danger yet again, only now as the target of a former colleague who believes she betrayed him. But Sherlock’s cornering of the true traitor, an elderly government secretary named Vivian Norbury, ended up killing Mary anyway.

Sherlock can never resist flogging criminals with their shortcomings, even if it endangers the lives of others. He may not actually be a sociopath, but he is certainly egocentric. In the end, everything has to be about him — even the lives orbiting his own.

Freeman deserves credit for vocalizing the guttural anguish the shock of holding one’s lover as she dies would produce; he did so in a way that defies vocabulary. But that moment also transformed Mary from a gutsy, lovable woman into the storytelling equivalent of a maul. Never mind her complicated former lives, her formidable skills, and her acceptance of Sherlock’s obsession with “The Game.”  She was only there to make to spice up the plot by splitting his relationship with John in two.

It says something that in the larger scope of television deaths, Mary’s was ordinary. She wasn’t brutalized or emotionally distraught; she was content, in fact. That makes her impulse to act as a body shield for a man who compulsively tweeted during her daughter’s christening even more surprising.

She also deserved better than to become another disposable woman, especially on a series that hasn’t produced much in the way of fully-realized female characters. This is a familiar criticism made and refuted by fans of Moffat’s work and Moffat himself.

Moffat obstinately refuses to admit to this shortcoming or correct it. It’s as if he scripts the world of his shows as his own wish fulfillment. In the orderly world of “Sherlock,” the central male characters wield their genius as weapons as the women stand by to admire or enable them.

Granted, Moffat didn’t script this episode – Gatiss did, and it bears pointing out that it was directed by Rachel Talalay. But Moffat and Gatiss share showrunner duties, which means he still plays a key role in shaping each character’s plot trajectory and how they’ll be translated from the original stories into the scripts.

And to be fair, Conan Doyle wasn’t exactly a feminist either. Recall Irene Adler? She’s one of the few characters to outwit Sherlock, featuring in the short story titled “A Scandal in Bohemia”.  She was one step ahead of Holmes, in the end, but only because she fled with the evidence he was seeking and married a respectable man.

“He used to make merry over the cleverness of women,” Watson says of Holmes in the tale, “but I have not heard him do it of late.”

The women on “Sherlock” are either two-dimensional iron divas like Lindsay Duncan’s Lady Elizabeth Smallwood (her personality description on her Wikia page says it all: “Lady Smallwood is a confident, powerful woman, and she is not easily shaken. She is extremely professional in her job”) or there to mewl and scream in fright, like Sherlock’s sweet and simple landlady Mrs. Hudson. If they’re lucky they get to have a job and take care of Holmes and Watson, like dear old Molly Hooper, Sherlock’s ally/emotional punching bag and, this season, Rosie’s godmother and John’s most reliable babysitter.

Mary may have served a different purpose than most, but her role in the plot was initially to reveal more to John about himself than he may have been ready to admit to. A posthumous message to Sherlock makes her the agent tasking him to “save John Watson”; we’ll eventually find out what that means (and whether her direction to “Go to Hell” is invective from beyond the grave or instruction to buy a plane ticket to Hell, Norway).

In any case, Mary was a puzzle piece, one that fit in to Sherlock’s life perfectly. Quick-witted and resilient, the erstwhile killer won over the detective with her fierce intellect, curiosity, natural deductive ability and loyalty. He grew to love her, as much as he can “love” anyone, because he loved John.

Those feelings weren’t necessarily reciprocal, or at least, not to extent that the lady would throw herself in front of a bullet meant for Sherlock. Yet that’s what happened on Sunday night. Mary Watson — wife, mother and sharpshooter — took the lead meant for her husband’s best friend after Sherlock goaded his would-be murderer to pull the trigger.

As the plot brings us back into the latest chapter in Moriarty’s game, somehow incorporating Toby Jones as Holmes’s new adversary Culverton Smith, neither Sherlock nor the drama’s showrunners need the distraction of human error. The path is set. It was always about these two men, Sherlock and John.

If we get another Mary, she’s just as likely to be a red herring or a device instead of a fully formed character whose existence does not rely upon serving that central and most important platonic love affair. Then again, we probably won’t.