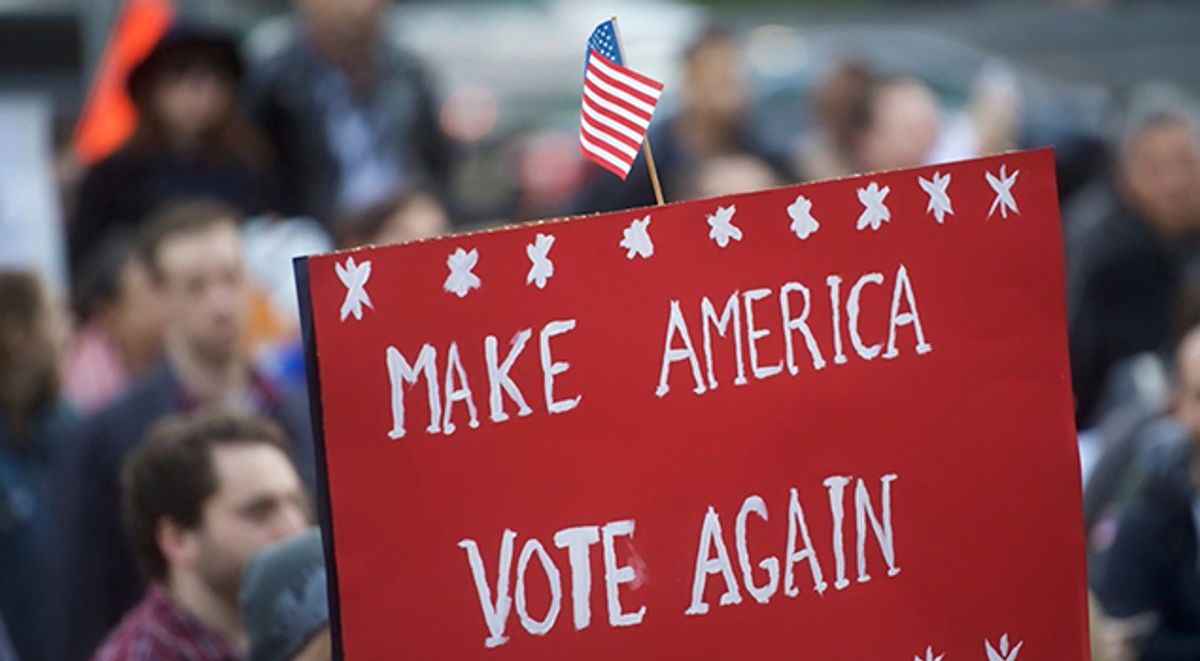 More than 50 Electoral College members who voted for Donald Trump were ineligible to serve as presidential electors because they did not live in the congressional districts they represented or held elective office in states legally barring dual officeholders.

That stunning finding is among the conclusions of an extensive 1,000-plus page legal briefing prepared by a bipartisan nationwide legal team for members of Congress who are being urged to object to certifying the 2016 Electoral College results on Friday.

“Trump’s ascension to the presidency is completely illegitimate,” said Ryan Clayton of Americans Take Action, who is promoting the effort. “It’s not just Russians hacking our democracy. It’s not just voter suppression at unprecedented levels. It is also [that] there are Republicans illegally casting ballots in the Electoral College, and in a sufficient number that the results of the Electoral College proceedings are illegitimate as well.”

“Republicans like to talk all the time about people voting illegally,” Clayton continued. “We have a list of a bunch of Republicans that allegedly voted illegally in the Electoral College. Pam Bondi is the attorney general of the state of Florida and the Florida Constitution says that you cannot hold two offices. And she holds the office of Attorney General and she holds the office of federal elector in the Electoral College. That is a violation of the law. That is a violation of the Constitution. And the vote that she cast in this election is illegal.”

A joint congressional session is scheduled to ratify the 2016 Electoral College vote this Friday. While there have been calls to challenge that certification—including one women-led effort saying Trump's victory is due to voter suppression targeting people of color—the analysis that scores of Trump electors were illegally seated, and the additional finding that most states won by Trump improperly filed their Electoral College "Certificates of Vote" with Congress, is unprecedented.

Their research and report grew out of the legal activities surrounding the December 19 Electoral College meeting, where Clayton and others urged Republican electors to reject Trump saying they had a constitutional responsibility to pick a more qualified president.

“We have reason to believe that there are at least 50 electoral votes that were not regularly given or not lawfully certified (16 Congressional District violations and 34 Dual Office-Holder violations),” the executive summary of the Electoral Vote Objection Packet said. “The number could be over a hundred. We urge you to prepare written objections for January 6.”

“The compiling of the laws and evidence in this Electoral Vote Objection Package was completed by a national team of roughly 15 pro bono attorneys, law students, and legal assistants who represent no client or entity,” the summary said. “We are non-partisan—Democrat, Republican, and Independent. We live in different parts of the country, urban and rural, red states and blue states.”

The Electoral College’s results have only been challenged twice since 1877. The most recent was in 2005, when an objection to Ohio’s Electoral College votes was filed by Rep. Stephanie Tubbs-Jones, D-OH, and Sen. Barbara Boxer, D-CA. While that effort did not stop President George W. Bush's reelection, it did force both chambers of Congress to debate for two hours before the Electoral College vote was ratified. Tubbs-Jones and Boxer used the podium to rail against GOP efforts to suppress the vote and disqualify ballots in communities of color.

The process for challenging the Electoral College vote is two-fold. First, a House member has to file a formal challenge and objection. Then one House member and one senator has to sign on, prompting each body to retire to their chambers for the two-hour debate.

The Electoral Vote Objection Packet briefing cites two main areas where 2016 Electoral College members were illegally seated and a third where their votes electing Trump were improperly sent to Congress.

The first group of illegitimate electors amounts to political carpetbagging. “In North Carolina, for instance,” the briefing says, a state law, “NCGS 163-1(c) states, ‘One presidential elector shall be nominated from each congressional district…’ Yet, we have voter registration cards showing that numerous North Carolina electors lived outside the congressional districts they represented.”

The report lists the following states and their number of illegitimate electors: Arkansas (two from outside its congressional district); Indiana (one), Louisiana (one), Michigan (one), North Carolina (seven), Oklahoma (one), and Texas (three).

The second group of illegitimate electors is based on the fact that presidential electors hold a federal office, however short-lived, and that directly conflicts with states that ban elected officials from holding more than one office at a time. Florida’s state constitution, for example, bars dual-office holding. Its Supreme Court has issued rulings that further define what constitutes an officeholder. And the state legislature has passed other laws treating them as public officials, such as reimbursing them for travel costs.

“Ironically, Florida Attorney General Pam Bondi, who has issued a number of Advisory Legal Opinions on dual-office holding, was a presidential elector,” the briefing said. “Her name was on the Governor’s certification list of Republican electors, and also Attorney General Bondi cast her electoral ballot on December 19. More Negron, who also cast an electoral vote, is currently president of the Florida Senate.”

The report lists the following states and their number of illegitimate electors based on dual-office holders: Alabama (two), Florida (12), Georgia (four), Iowa (two), Kansas (four), Kentucky (one), Michigan (one), Missouri (one), Nebraska (one), North Carolina (one), Ohio (one), Oklahoma (two), Pennsylvania (two), South Carolina (one), South Dakota (three), Tennessee (two), Texas (four), Utah (one), and West Virginia (three). This tally, which adds up to 49 electors, was taken from a spreadsheet accompanying the briefing and is a larger number than what was cited in the report’s executive summary, which is quoted above.

Finally, there is another area of concern. Apparently, 23 states—out of the 31 that cast Electoral College votes for Trump—did not properly report separate vote counts for president and vice-president to Congress. That violates the 12th Amendment of the U.S. Constitution and a federal law requiring presidential electors in each state to “provide ‘two distinct lists of votes,’ one for the president and the other for the Vice President,” the briefing said. “Of 31 states, only eight states followed that law," the report said. "Some states codify the federal law into their own state law regarding presidential electors. Of those, 15 states did not provide two lists of signatures on their Certificates of Vote.”

“We are not providing any legal advice,” the briefing’s disclaimer says. “We strongly suggest that members of Congress employ their own legal teams to verify our work.”

It may be that the efforts to convince Congress to challenge the ratification of the 2016 Electoral College amounts to little more than a Hail Mary aimed at derailing a Trump presidency. As of late Wednesday, Clayton thought there would be House members willing to object to certifying the Electoral College vote, but he was less certain about finding a senator willing to go along.

But even if a challenge is mounted and fails, it underscores the illegitimate basis of Trump’s presidency and the deep opposition to it, and refutes the GOP’s outrageous claim that it has a mandate for dismantling government programs across the board.

“We have a list of 50 illegal electors,” Clayton said. “That puts Donald Trump below the threshold that he needs to be elected president. Let’s debate it in an open session. According to the Constitution, the Congress, if nobody wins on the first round of balloting, picks from the top three candidates. That will be Hillary Clinton, Donald Trump and Colin Powell.”