It was the racism, stupid: White working-class "economic anxiety" is a zombie idea that needs to die

Donald Trump was supported by white voters across demographic groups. Can we stop coddling them? 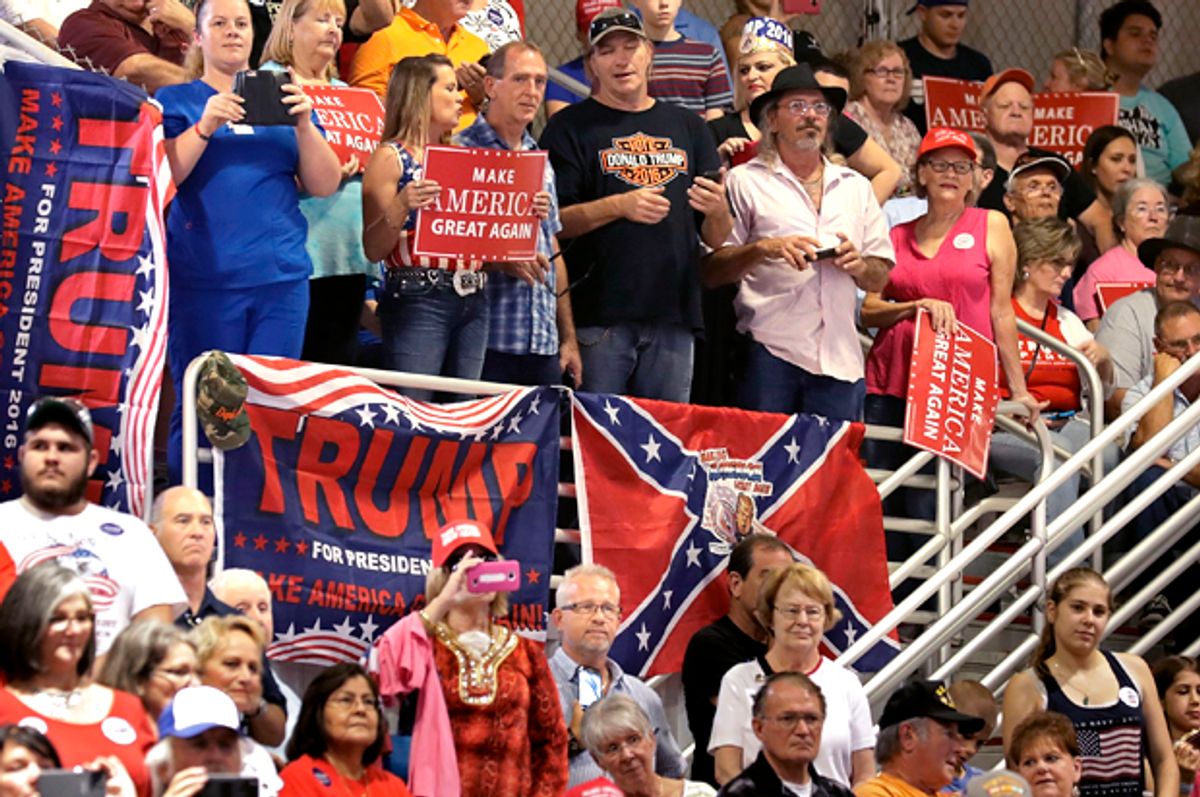 On Jan. 20, Donald Trump will become president of the United States of America. Donald Trump is an authoritarian and demagogue who meets the definition of a fascist, as I have argued on multiple previous occasions. His election and the 60 million voters who supported him are a threat to American democracy.

The first draft of this history is being written now. In the years and decades to come, we will have the benefit of hindsight, as well as more information and context, to make better sense of Donald Trump's victory on Election Day 2016 and its implications for American democracy and global politics.

But in the immediate present, the dominant narrative for explaining the rise of Donald Trump and his fascist movement has been centered upon the "white working class" and its purported "economic anxiety." For a variety of reasons, this is a compelling story for the American corporate news media, the pundits and other elite opinion leaders.

The white economic anxiety narrative is simplistic. It is also the result of a type of "path dependence," whereby the answers offered are largely a function of the questions asked. The white economic anxiety thesis is also a way for the pundit class — with a majority of its members being white and from a very narrow socioeconomic background — to ignore the enduring power of racism and sexism in American society.

Here, a belief that it must be something other than racism (and sexism) that won Trump the election functions as a conceptual blinder for analysts and commentators who want to deny the ugly truth about the values and beliefs held by their fellow (white) Americans. In all, these factors are part of an effort, albeit a superficial one, to empathize with the supposed pain and anger of white working-class voters who feel "left behind" and by doing so normalize their egregious, irresponsible and hateful decision to support Donald Trump.

Most important, the economic-anxiety thesis is in many ways incorrect.

To wit: Trump won white voters across almost every demographic category. Both low-income and high-income whites supported him at rates higher than their peers backed Hillary Clinton. In fact, the typical Trump supporter comes from a household that earns $72,000 a year — significantly above the national average — and has not been negatively affected by globalization.

Moreover, if the economic anxiety thesis were correct, blacks, Latinos and Native Americans (people who have much less wealth and income than whites) would have flocked to Trump. Instead, they were repulsed by him and overwhelmingly supported Hillary Clinton and the Democratic Party.

It was not only the much-discussed and much-pitied white-working class as a group that gave Trump the election (in combination with successful efforts by the Republican Party to suppress the votes of African-Americans, Latinos and other groups0. Nor was it only the possible impact of Russian meddling. It was white voters with college educations as well. Writing for the New Republic, Eric Sasson summarized this:

Perhaps, then, these Trump voters are the most deplorable of them all. They’re not suffering or desperate, and have no concrete reason to hate the status quo or to feel like they are in decline. They understand that Trump is manifestly unprepared to be president, have heard his many lies and insults, yet voted for him anyway. And without them, Trump wouldn’t have won. The media ought to focus on their motivations, too — and reporters won’t even have to fly to Youngstown to find them.

To quantify this double standard in deservingness we embedded an experiment in a new HuffPost/YouGov survey. We asked half of our respondents if they agreed or disagreed with the following statement: “Over the past few years, blacks have gotten less than they deserve.” The other half of the sample was provided with the exact same statement, except we changed “blacks” to “average Americans” — a group that psychology research shows is implicitly synonymous with being white.

The results show a very strong public divide in the perceived deservingness of average Americans and African Americans.

A clear majority (57 percent) in the survey said that average Americans aren’t getting their fair share in society. But only 32 percent agreed when that same statement applied to African Americans.

The biggest double standard in deservingness, though, occurred for Trump voters. Almost two-thirds of Trump voters said that average Americans aren’t getting as much as they deserve; only 12 percent of Trump supporters said blacks have gotten less than they deserve.

Perhaps most importantly, the display shows that the main dividing line between Clinton and Trump voters was on the question of black deservingness. Most voters, regardless of who they supported in the presidential election, thought that average Americans are getting less than they should. Yet, Clinton’s voters were a great deal more likely than Trump’s to say that blacks have also gotten less than they deserve (57 percent to 12 percent respectively).

It appears, then, that Trump voters weren’t simply motivated by their widespread belief that average Americans are being left behind. Rather, their strong suspicion that African Americans are getting too much — a belief held by the overwhelming majority of Trump voters — was a much stronger predictor of their vote choices in last month’s election.

Racially resentful beliefs that African Americans are getting more than they deserve were so strongly linked to support for Trump, in fact, that their impact on both the 2016 Republican Primary and the general election were larger than they had ever been before.

Tesler's new findings complement other work that has repeatedly shown that Trump voters (and Republicans as a group) have more negative attitudes about African-Americans and other people of color than do Democrats and self-described liberals and progressives, are more authoritarian and ethnocentric, and possess a delusional belief that white people are victims of racial discrimination in America.

It is increasingly clear that it was neither white economic anxiety operating in isolation nor the white working class as a monolithic group that won Trump the White House. Rather, it was the fact that Trump's campaign, in an extension of at least five decades of Republican strategy, was able to use overt white racism and white racial resentment to exacerbate and manipulate misplaced anxieties about relative group power and privilege in American society.

Historically, to be white was to be the quintessential American. In the United States, whiteness also proceeds from an assumption that white people are always and forever to be dominant and consequently the most powerful of all racial groups. This is white identity politics as both a practice and ideology. It is also the not-so-subtle meaning of Donald Trump's slogan "Make America Great Again!"

With the election of Trump, the United States has fully entered its twilight years. In this tumultuous time, the American news media should be providing citizens with light and clarity. Instead, the media has largely chosen to normalize Trump's election by peddling the fiction that it was primarily white working-class economic insecurity, rather than white racism and white identity politics, that propelled him to victory.

As such, the pundit classes will treat as a surprise the misery and pain that Trump's racial demagoguery will inflict on many millions of Americans instead of the wholly predictable actions of a man who ran a campaign fueled by racism, authoritarianism and bigotry. Much of the American corporate media has literally chosen profits over people, civic virtue and the truth. For this betrayal of the public good, the media should be shamed and condemned.