Stop the God groveling, Democrats! Lack of religion is not your real problem

Every time Democrats lose, they rediscover the importance of religion. It's a simplistic and disrespectful reaction 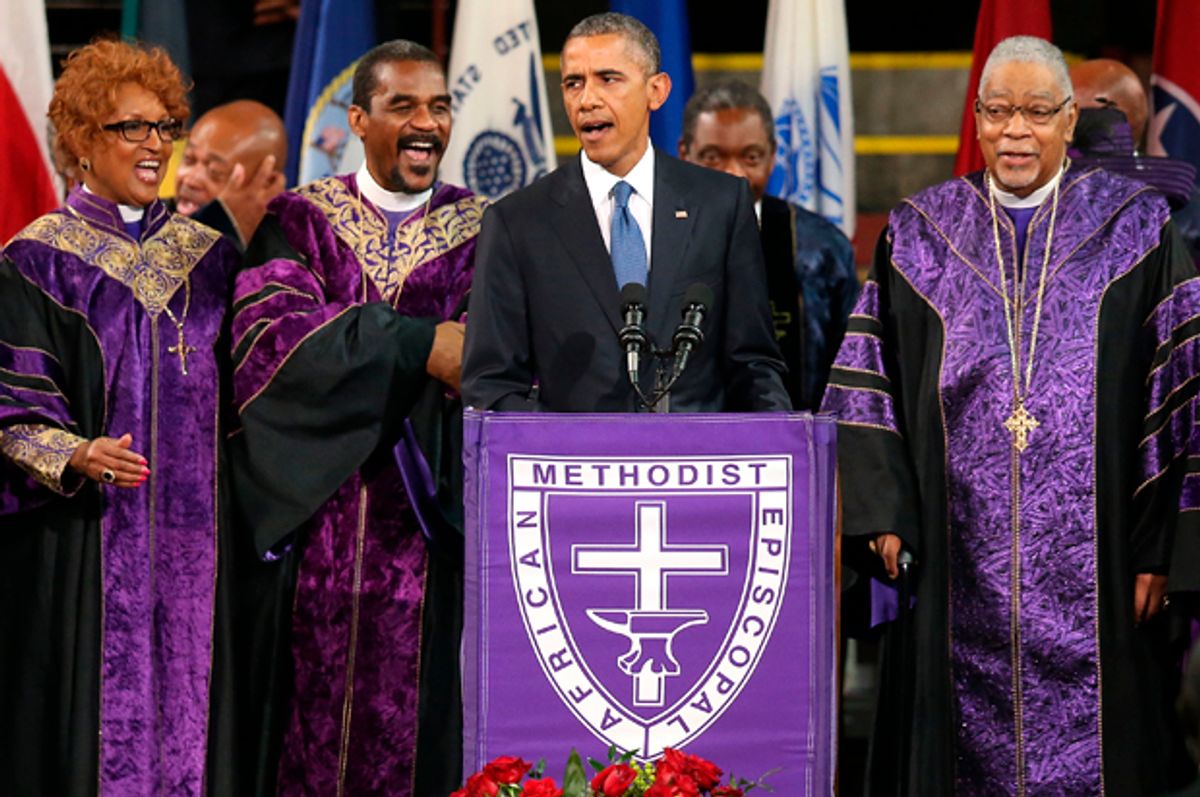 Postmortems for the 2016 election are ongoing, but the early consensus that Republicans won because they were more attentive to the economic needs of the white working class seems to be holding up. The regions where such people turned out in larger numbers than usual for Donald Trump are also the ones where he took narrow victories in winner-take-all electoral states, so it's a natural assumption.

Regional disparities in economic data show that while rural and exurban areas are recovering from the financial crisis, they still have not improved to the extent that the more populated metropolitan areas have. Those without college degrees do suffer from the ongoing dislocation of major agribusinesses, automation and globalization, which made them excited to support a candidate who promised to reverse all that.

But there's more to what happened than economics, and I think everyone understands that, too. Race played a large role in Donald Trump's campaign, from his promises to deport Mexican and Muslim immigrants to his emphatic claim of "I am the law-and-order candidate." There have been many thoughtful essays written about how the subtext of "Make America Great Again" intersects with the changes brought by the civil rights movement. (Jamelle Bouie's Slate piece, which I highly recommend, has explained why some Barack Obama voters moved to Trump.)

But answers about what to do about all this are not as simple as people think. Obviously a different message delivered by a different messenger might help, but the racial divide has been a longstanding challenge for Democrats, since at least as the mid-1960s, when President Lyndon Johnson signed the major civil rights and voting rights laws. Paul Krugman of The New York Times pointed this out back in 2015, citing a paper by the economists Alberto Alesina, Edward Glaeser and Bruce Sacerdote titled “Why Doesn’t the United States Have a European-style Welfare State?”

Its authors — who are not, by the way, especially liberal — explored a number of hypotheses, but eventually concluded that race is central, because in America programs that help the needy are all too often seen as programs that help Those People: “Within the United States, race is the single most important predictor of support for welfare. America’s troubled race relations are clearly a major reason for the absence of an American welfare state.”

This translates into a general antipathy and mistrust toward government and plays into the hands of powerful economic interests that seek to manipulate lower-status white people for their own ends.

Democrats cannot abandon people of color in order to win over this group of voters. But unless they do, their economic appeals will remain tangled up in racial politics. (Even Franklin D. Roosevelt had to give up one one group of voters to get the other.) Perhaps there are more Barack Obama-style candidates out there who can walk that line and "lucky" enough to run at a time of such economic turmoil that people are willing to think outside their normal boxes. Barring that, it's more likely that Democratic politicians will seek to find other ways to appeal to this group in the hope they can lure enough of such voters to win national elections.

That brings us to what is the likely outcome of this quest for the elusive white voter who mistrusts government and feels disrespected and dismissed by the liberal elites who fail to understand him or her: the culture war. It's already showing the usual signs of revival, which should come as no surprise. Obama, in his first press conference after the election, went right there:

How do we make sure that we're showing up in places where I think Democratic policies are needed, where they are helping, where they are making a difference, but where people feel as if they're not being heard? And where Democrats are characterized as coastal, liberal, latte-sipping, you know, politically correct, out-of-touch folks, we have to be in those communities.

In fact, this past summer Democratic congresswoman Nancy Pelosi attributed Hillary Clinton's troubles with white males to those culture-war issues:

So many times, white, non-college-educated white males have voted Republican. They voted against their own economic interests because of guns, because of gays and because of God, the three Gs, God being the woman’s right to choose.

This is familiar ground. These contested issues are comfortable for both conservatives and liberals to openly fight over. They've been doing so for years.

I would expect to see more articles like this one in the Atlantic cropping up over the next few months, reminding Democrats that they had better find religion:

This could have been written in 1981, 1985, 1989, 2001 or 2005. In fact it was — ad nauseam. Democrats would lose elections and immediately start handwringing over their alleged hostility to "pro-life" people, hemming and hawing over gay rights and mumbling about "family values" and "religious liberty."

It's as ridiculous now as it was then. The Democratic Party is full of religious people, not the least of whom are African-Americans and Latinos who are religious at higher levels than whites. Urban politicians navigate religion all the time. In fact they are far more religiously "literate" than their rural brethren, since they have to be able to speak to members of many different religious denominations: Jews, Muslims, Hindus, Catholics and every possible variety of mainline or evangelical Protestant.

In fact, it's truly insulting that people keep insisting that Democrats are irreligious, particularly since it seems to be the churches attended by liberals where racists and fanatics choose to "express their beliefs" about abortion, God, guns and gays with a hail of bullets.

Inevitably, Democrats will try to find ways to better "relate" to the white people who didn't vote for them in the last election. Unfortunately, they are likely to fall back on their old ways because these folks don't care for certain members of the Democratic base. So Democratic candidates may try to find ways to earn that trust by describing liberals as "out-of-touch elitists" and insulting their religious followers by calling them illiterate. This is unlikely to do anything but demoralize the liberal base and make it that much harder for Democrats to win elections. But the "lost religion" argument is as comfortable as a pair of old slippers, and if there's one thing Democrats are looking for right now, it's comfort.