What are Steve Mnuchin and Jeff Sessions hiding? Trump's Cabinet appointees have huge gaps in their records

The Treasury nominee doesn't want to talk about his years as a banker; Sessions would rather not discuss the 1980s 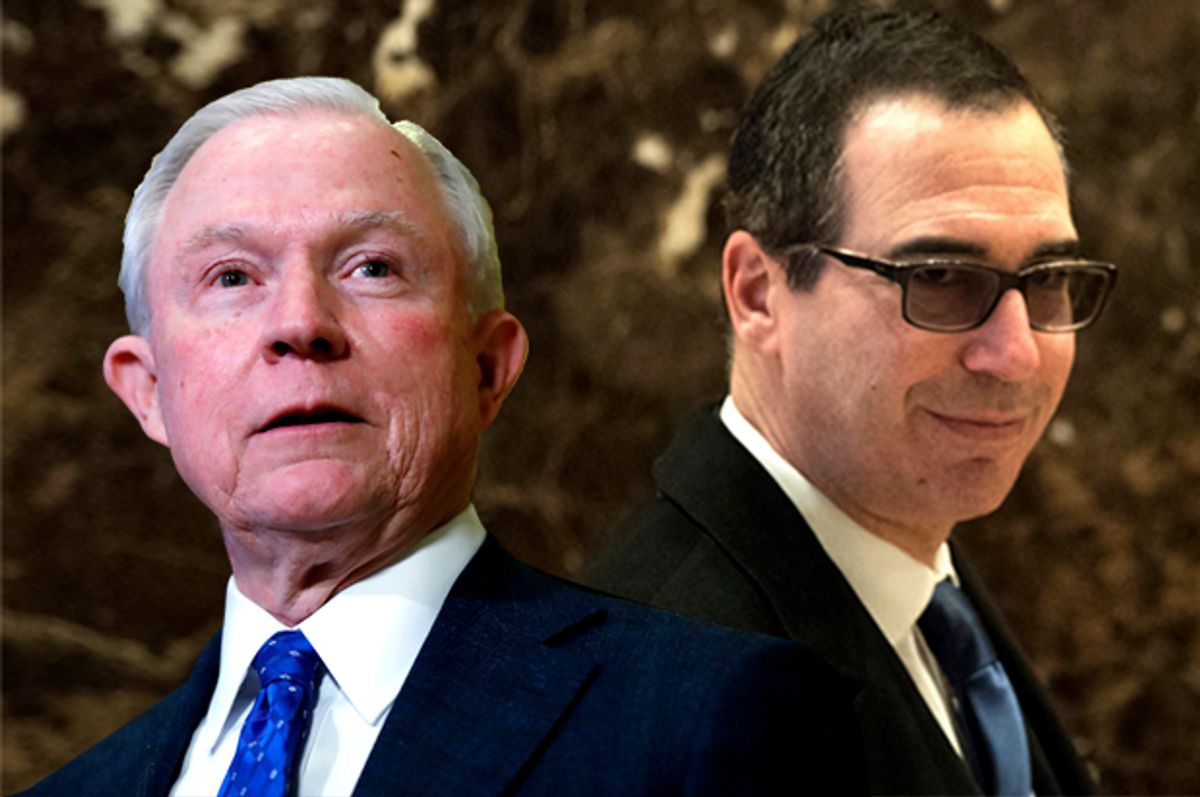 There is fudging your résumé, and then there is whatever a couple of Donald Trump’s Cabinet appointments have been doing.

“Fudging” implies small changes to a résumé, the kinds of little white lies a person might commit to print with little chance of blowback. Maybe he wants to make a stretch of unemployment look shorter than it was. Maybe she exaggerates responsibilities at a previous job, to make herself sound more qualified for a new position.

Trump’s Cabinet nominees, on the other hand, are leaving out whole years and even decades of their records. It is a particularly cynical and silly move, since so much of what they are minimizing or outright erasing is part of the public record, easily dug up by any Democratic staffer, journalist or idiot with access to Google.

Take Steve Mnuchin, nominated to be America’s next secretary of the Treasury. As Vanity Fair noted not long ago, Mnuchin’s official GOP biography plays up his experience running the hedge fund Dune Capital Management and his limited time in Hollywood, where he earned three dozen credits as an executive producer, often a vanity title given to a movie’s financiers.

Left out of this bio is the 22 years Mnuchin split between working for Goldman Sachs, where he was eventually made a partner, and running OneWest, where he was CEO for six years, beginning just as the Great Recession was clobbering the economy in 2009. No big deal! Those 22 years make up only more than two-thirds of his adult working life.

There are plenty of reasons for Mnuchin to not want to draw attention to this part of his record. His future boss Donald Trump used Goldman Sachs as a cudgel to beat Hillary Clinton during the presidential campaign over paid speeches she gave to groups at the bank. The firm is also associated with the reckless gambles and greed that caused the Great Recession, and the name alone can cause the public to spit like a Jewish grandmother at the mention of it.

And OneWest stands accused of a vast ocean of unethical and downright inhumane behavior during the foreclosure crisis of a few years ago. This includes an infamous incident when the bank foreclosed on the home of a 90-year-old woman who accidentally shorted one mortgage payment by 27 cents.

All of this would be embarrassing for a president who is still claiming to be a populist wanting to “drain the swamp” and lift up the American people — at least, if Donald Trump were capable of feeling shame. But Trump won’t be the one in the hearing room, and this history, particularly the part at OneWest, could make for a very difficult grilling for Mnuchin, assuming Senate Democrats are willing to put up a fight.

Then there is Jeff Sessions, Trump’s nominee to take over as attorney general. The progressive advocacy group Alliance for Justice recently reviewed the questionnaire the Alabama senator submitted to the Senate Judiciary Committee as part of the routine vetting all Cabinet nominees receive before confirmation hearings. And Sessions left some gaps that, when filled in, could lead to questions he would probably rather not answer.

The Alliance for Justice's major complaint against Sessions revolves around the paucity of documentation he submitted for a 20-year period in his career, stretching from when he took the job as United States attorney for southern Alabama in 1981 through his first term in the Senate, which ended in 2003. As a public figure during that time frame (he also served as Alabama’s attorney general), Sessions should have left a huge paper trail of interviews, speeches, writing and other public statements. A large enough collection would give a wide-ranging look at how he might approach the job of attorney general for the entire nation, one of the biggest and most consequential positions in the government.

But Sessions has submitted only 20 interviews and 16 speeches (nine of which were press conference statements), plus a couple of op-eds and articles. This is hardly a comprehensive archive for someone who has been in the public eye for so long.

What is particularly interesting is that this period covers Sessions’s 1986 nomination to a federal judgeship. His nomination hearings before the Senate turned into a carnival of testimony about his supposed racism, turning up multiple witnesses who claimed that Sessions had made racially insensitive remarks. The Senate Judiciary Committee eventually rejected his nomination, making Sessions only the second nominee to a federal judgeship that the committee had rejected in half a century.

Perhaps Sessions figures that, having served as a senator for 20 years now, his colleagues will go easy on him in the spirit of Senate comity. It's a safe bet. After all, it is likely that Republicans in the Senate share his lack of commitment to enforcing civil and voting rights. His nomination is likely to get rubber-stamped, even if Democrats make the hearings as uncomfortable as possible.

Still, this offers a sign of just how insecure Republicans are about their position, even with control of both houses of Congress and the White House. They are trying to shove two major nominees through the Senate without a thorough examination of their records: participating in some of the worst economic abuses of the last couple of decades, in Mnuchin’s case, or rolling back the civil rights advances of the 1960s, as seems to be the case with Sessions. Democrats probably can’t stop these two men from being confirmed. But they can help to expose these two nominees on their way into office — if the Democrats choose to fight.