How a tiny nonprofit prepares nervous young fathers for life’s biggest challenge, and then sticks with them 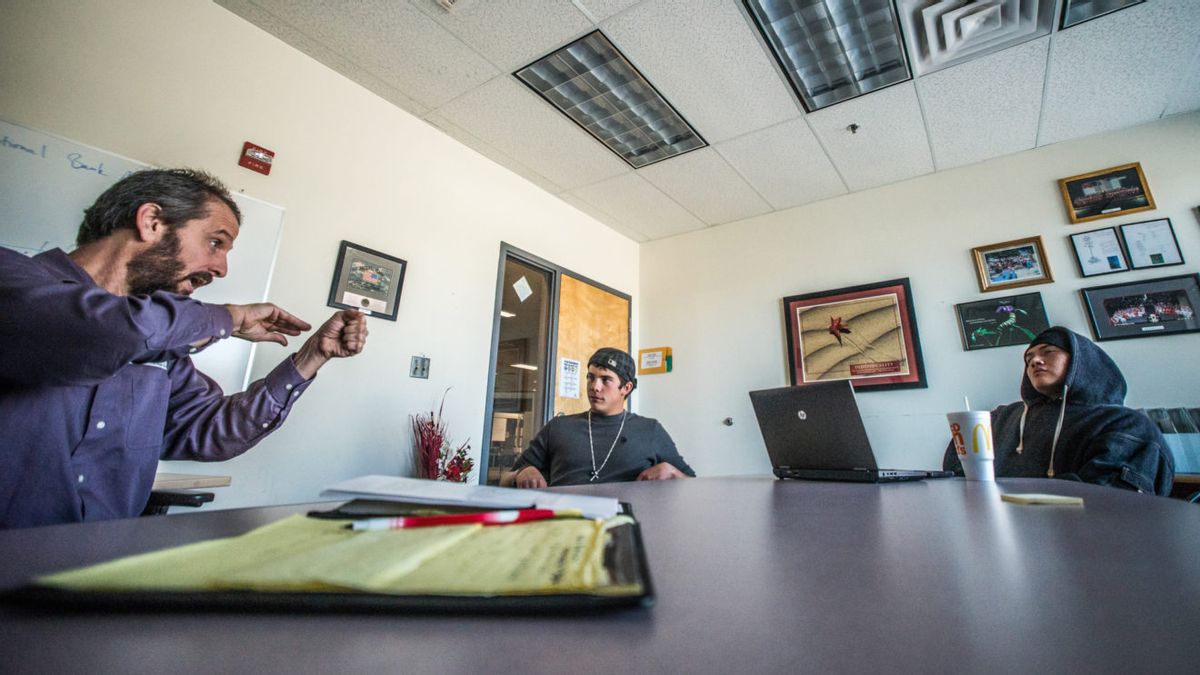 In a windowless conference room at Cesar Chavez Charter High School in Albuquerque, New Mexico, two teenagers sit side-by-side in padded faux-leather swivel chairs, slathering slices of pepperoni pizza with packets of ranch dressing. Seventeen-year-old Ramon Martinez and his girlfriend, Carmen Estrada, 18, are the parents of a six-month-old baby boy named Jaden. Every week, while family members look after their son, they and other teen parents gather to meet with Johnny Wilson, the director of the Young Fathers of Santa Fe. In a state where teen pregnancy is unusually high, this nonprofit reaches out, not to teen moms or would-be parents, but to young dads throughout central and northern New Mexico. Moms are welcome to join the fathers at select gatherings, as the team’s top priority is to foster cooperation between both parents, in addition to teaching the young men about things like visitation and custody arrangements, how to get and keep a job, and how to finish school.

More from Narratively: “I Thought Sex Work Would Be Empowering and Feminist. I Was Dead Wrong."

Wilson, a slight 49-year-old with deep-set blue eyes and a close-cropped goatee, is at ease with the kids. He’s familiar with their jargon, and knows how to make them laugh. Today’s topic is driver’s licenses. Martinez and Estrada don’t have them, and neither does the other couple who joins them: Paola Orozco and Jose Amarillo, both 16. They’re expecting a baby in December.

More from Narratively: “Us: ‘We’re Getting Married!’ Them: ‘How Can You Be So Selfish?!’"

Despite the legal restrictions, all four teens regularly drive.

“How come you guys don’t have licenses?” Wilson asks. The teens list various reasons, including a lack of free time for the required driver’s ed. courses.

More from Narratively: “The Day I Realized I Could Never Make My Mom Grow Up"

“I get that,” Wilson says, nodding. “And when you’re eighteen, like you are, Carmen, you can just take the test. But it’s a big chance to take; if you get pulled over, it’ll be even harder to get one. I want you guys to be aware of that.”

The conversation switches gears to securing employment. Martinez, who sports a starter mustache and is still growing into his lanky frame, has an off-the-books job at a car detailing shop. After congratulating him on the gig, Wilson calmly encourages Martinez to find something above board so that Martinez can list it on future résumés and ensure he is paid fairly for his work. Then, they move on to the dynamics of relationships.

“Everybody’s relationship has problems and everybody fights,” Wilson says. “But what’s important is how we communicate when we get mad. Most of us don’t explore what happens inside when we’ve lost our temper. It’s not about not feeling upset. The trick is figuring out how to manage it. What do you do when you get upset?” he asks.

“Getting upset is okay,” Wilson reiterates, “but it’s important to make sure that it’s controlled around kids, because it can mess with their sense of safety and security, and that can create a trauma reaction. Let’s talk about strategies for taking the intensity down.”

Young Fathers of Santa Fe, just recently renamed Fathers New Mexico, was founded in 2009 by Barry McIntosh, who had been volunteering with the state-funded New Mexico Young Fathers Project, at the time run by Wilson. When funding for that program ran out, McIntosh decided to found a nonprofit, paid for out of his own pocket and through foundation grants, to avoid a gap in services.

“I became a father in 1978,” McIntosh said during a phone interview. He retired to California about a year ago, after turning the reins of the organization over to Wilson, a longtime friend and colleague. “Becoming a dad changed me from a young man into a man. I was 26; I wasn’t a teen father. We were married, and the baby was planned, but it was still so transformative. I want other guys to be able to bond and connect [with their kids].”

Teen pregnancy and parenting remain pressing social issues in New Mexico, a state that has long hovered at or near the top of teen pregnancy rates nationwide. Poverty and income inequality correlate closely with teen pregnancy, and as one of the poorest states in the country (in 2014 New Mexico had both the highest poverty and the highest child poverty rate in the nation), New Mexicans seem caught in a whirlwind cycle of unprepared young people becoming parents.

Fathers New Mexico supports and provides sex education to help prevent teen pregnancies, but the organization is also committed to the idea that preventing teen pregnancy and supporting teen parents are not mutually exclusive.

“Young parenthood doesn’t have to be a shameful experience,” McIntosh says. “You can’t change the past. Once you’re faced with a young couple and a pregnancy they want to keep, you come at it from there.”

The vast majority of programs serving teen parents focus on young mothers, who often end up being the primary or sole caregiver for their children. While Fathers New Mexico is part of the National Fatherhood Initiative — a national community of organizations with a Washington, D.C. base that serve fathers — groups that primarily serve young dads are scarce in New Mexico, where they’re desperately needed.

“We have a visceral understanding of the impact on a child if mom is absent, but there is not less of an impact if fathers are not present,” Wilson says. “We [should] continue to focus on maternal and child health … of course, but include the paternal aspect as well.”

McIntosh and Wilson say most dads they meet genuinely want to be involved in raising their kids, despite the myriad forces that compel them to be less present, including poverty and a lack of good male role models. “The main thing we’re trying to do is figure out how to help these young men stay,” McIntosh says. “That’s where we start.”

On another fall afternoon, Wilson meets three young fathers at the Central New Mexico Community College campus in Albuquerque’s South Valley. Bordering the Rio Grande, the South Valley is green, dotted with farm fields, and stands out as a lush ribbon running through harsh desert terrain. Most of the shop signs in the valley are in Spanish, and taco trucks cluster in parking lots during daylight hours. The dads present today — Nicholas Barela, eighteen, Darren Thompson, 19, and Esteban Jiron, 21 — eat dripping tacos over paper bags while Wilson checks in with each of them about employment, GED pursuits, childcare and baby mamas.

Jiron, who has black hair that falls across his eyes, an easy smile0 and holes in his ears where plugs used to be, has his two children in tow: one-year-old Lily and six-month-old Zion. He hefts a car seat in each arm and deftly maneuvers a diaper change and bottle feeding for Zion.

Jiron greets Wilson with a complex dude-hug/handshake/backslap/fist bump. Jiron’s children have two different mothers, and while Wilson helped him secure a formal custody arrangement for Lily, Jiron takes care of Zion part-time without a legal agreement in place. Jiron works full-time as a waiter and rents his own apartment; he graduated from high school, has attended culinary school, and sees his kids regularly. He’s one of the organization’s most successful participants.

“I still don’t get to see Lily as often as I’d like,” Jiron says, “but it’s a lot better than it was before, at least two or three times a week.” Jiron’s relationship with Lily’s mom is on-again/ off-again. When it’s “on,” He says they’re extremely careful about birth control. “Two is quite a bit of work,” he says. “I don’t plan on having another baby anytime soon.”

When Wilson steps out of the room for a moment, Jiron calls him a role model. “After Lily was born, I didn’t know how the court system worked. Johnny went down to the courthouse with me, every time I went. He never flaked out, he never showed up late, and he would call or text to see if I had any questions. He was just there.”

Since the inception of the project, Fathers New Mexico has served over three hundred young parents, at least 250 of them young men. The work the group does with each parent is intensive and often a years-long process.

“The program is not a specific intervention, but a set of interventions, each of which can be accessed a little, a lot, or intermittently by the participants,” Wilson said. “We’ve seen dads who were not seeing their children secure regular time with them, in some cases becoming the primary caretaker. We’ve helped young fathers to identify developmental delays in their children, and connected them to resources to address those issues. And we’ve worked with many young fathers who appeared on track to leave high school early who then went on to graduate.”

The group frequently works with dads whose challenges go deeper than being unsure of the court system or in need of help with the basics of parenting. One 32-year-old father of three, a long-term participant in the program, lost partial custody of his teen daughter last year after overdosing on heroin while she was staying with him — she was the one who called 911. In a separate incident, he slapped her across the face.

McIntosh acknowledges that sometimes dads should not be around their kids. “We try to meet the dads where they’re at, emotionally and psychologically,” he says. “We help, but we’re realistic; we tell them, ‘You wouldn’t want your child to be in a situation where your child isn’t with a responsible adult.’ If they need help we can’t provide, we certainly refer them out to drug counseling or AA. We want to help them with parenting skills, anger management, drug abuse, whatever they need. And we want them to know we’re not going to give up on them.”

Even though they all insist they’re now more diligent in using birth control, the young dads who met with Wilson at the community college say teen fatherhood isn’t a catastrophe. Instead, it is an opportunity to participate in creating good in the world.

“When I first found out I was going to be a dad, I was stressed and scared,” Jiron says. “I didn’t know what I was doing, and everybody told me that, too. But just being there is important. I realized my life was kind of empty before I had my kids, and now it’s a lot more fulfilling. I’m helping prepare the next generation, even if it’s just two babies.”