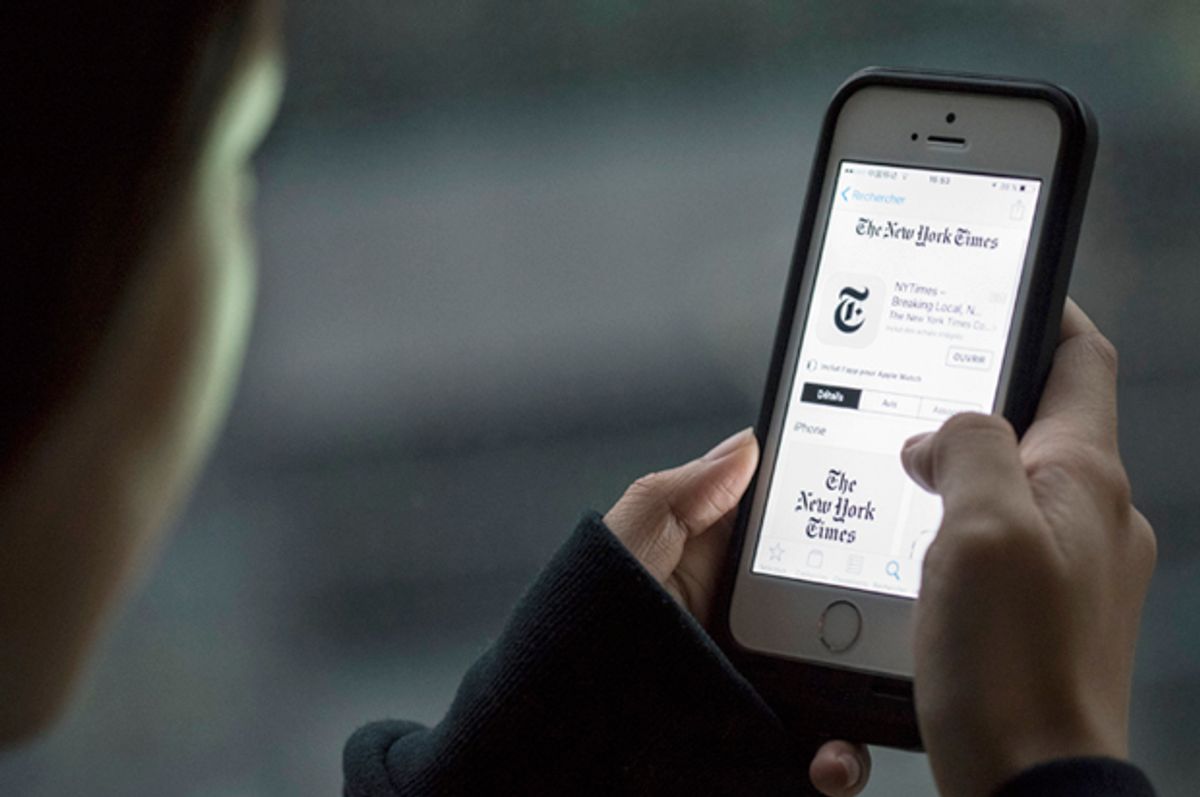 Apple has officially blocked the New York Times from the Chinese edition of its mobile application market. This move followed a Chinese government ruling that appears to have been sparked by the newspaper’s reporting on massive subsidies provided to Apple’s top manufacturing partner by the People's Republic.

The ban went into effect on Dec. 23, when Apple formally removed the Times’ English- and Chinese-language programs from its app store for users in mainland China. It was not announced by the newspaper until this week, presumably because the Times sought to reverse the decision.

In a statement released to the Times, Apple spokesman Fred Sainz said that the paper had been banned from the app store because it had somehow run afoul of unspecified Chinese laws.

“For some time now the New York Times app has not been permitted to display content to most users in China and we have been informed that the app is in violation of local regulations,” Sainz said in the statement. “As a result, the app must be taken down off the China App Store. When this situation changes, the App Store will once again offer the New York Times app for download in China.”

The newspaper’s website has been blocked by China’s infamous “Great Firewall” censorship regime since 2012, when it published several reports about the vast wealth of the family of Wen Jiabao, who was at the time the ostensibly Communist nation's country’s prime minister.

But Apple, the world’s most valuable company by market capitalization, is far from the only major technology firm willing to comply with Beijing’s demands in order to do business in China.

According to former Al Jazeera journalist Melissa Chan, “every single US tech company in China makes compromises in order to enter the market.”

She gave several examples in an essay for the Guardian, including social network LinkedIn, note-taking service Evernote and Microsoft. Google is one of the few American tech firms unwilling to comply, opting instead not to do business in China. It completely exited the country in 2010.

“But if anybody had hoped Google’s defection would launch an exodus, it never happened,” Chan wrote. “Since then, Chinese censorship and attempts to control foreign companies have only become more odious, with no indication it will let up.”

According to Wikipedia, about 3,000 major websites are currently banned within China.

There is some evidence that the Times apps were blocked by Beijing due to a story that reporter David Barboza was working on about the massive subsidies and other inducements that the Chinese government provides to Foxconn, a Taiwanese firm which is Apple's manufacturing partner  and the largest private employer in China.

According to the Times, Barboza contacted Apple on Dec. 23 for comment about his report. Within hours, the newspaper’s management was informed by the iPhone maker that its apps had been blocked for users with billing addresses within mainland China.

Earlier this week, China Central Television, the government's television operation, announced that it was relaunching its English-language channel China Global Television Network English to increase the exposure of Beijing’s views in the world.

“By launching CGTN, we want to re-brand our product to the world, to cope with the global trend in media convergence,” the company said in a statement quoted by the media industry publication Variety.