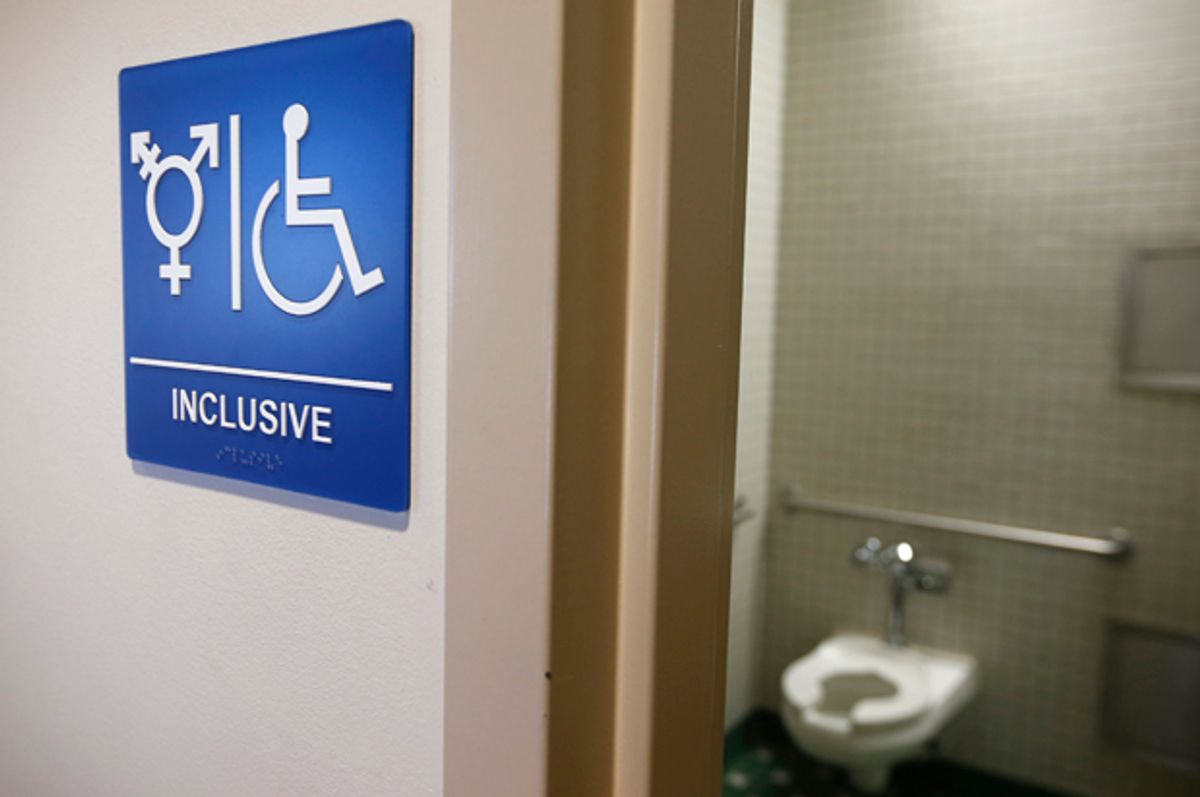 Republicans in at least six states are rushing to replicate the discriminatory anti-trans legislation passed by GOP state lawmakers in North Carolina. Widely known as "the bathroom bill," the law cost the state millions in lost revenue.

Already in the first week of 2017, Republicans in Texas and Virginia have introduced legislation modeled after North Carolina's disastrous HB2, a law that prohibits municipalities from passing anti-discrimination legislation and bars transgender people from using any bathroom which does not correspond to the gender stated on their birth certificate.

The so-called bathroom bill has been highly controversial since its introduction and has been deemed in violation of the Civil Rights Acts of 1964 by the Department of Justice, putting hundreds of millions in federal funding for education under Title IX in jeopardy. Since HB2 was signed into law in 2016, several NCAA and ACC championship games were moved from North Carolina and rescheduled; PayPal and Deutsche Bank both promised to halt expansion plans in the state. Forbes has estimated that the state lost $600 million over six months because of HB2.

Political observers in the Tar Heel state have credited Republican Pat McCrory's staunch support for HB2 as a major reason for the loss of his gubernatorial re-election campaign. Despite that fact, Texas Lt. Gov. Dan Patrick is now proudly prioritizing his state's effort to mimic the transphobic law.

Patrick unveiled the "Privacy Protection Act" at the Texas State Capitol Thursday. Senate Bill 6 would require transgender people to use bathrooms in public schools, government buildings and public universities "according to their biological sex” and would pre-empt local nondiscrimination ordinances that allow transgender Texans to use the bathroom that corresponds with their gender identity. Some of the state’s biggest cities -- including Dallas, Austin and Fort Worth -- have had comprehensive ordinances on the books for a decade, offering transgender residents some degree of protection against discrimination in employment, housing and other public areas such as bathrooms.

The Texas Association of Business has already come out against the proposed law -- as have tech giants Apple, IBM and Intel.

With an economic output of $1.64 trillion in 2015, Texas has far more to lose than North Carolina ever did. Texas has the second largest economy of any state in the nation, while North Carolina's 2015 GDP was $506 billion. Experts estimate Texas stands to lose some $8.5 billion should it adopt its own "bathroom bill" -- a loss of 185,000 jobs.

GOP lawmaker Bob Marshall introduced the "Physical Privacy Act," House Bill 1612, this week. If passed, Marshall's bill would allow someone who uses a bathroom in a government facility to "bring an action against the government entity that owns, leases, or controls such building if such individual encounters a member of the opposite sex in such restroom, changing facility, or private area."

The radically transphobic legislation also includes a provision that requires under the law that school principals out transgender students:

The principal of a public school attended by a child shall notify the child’s parent, guardian, legal custodian, or other person having control or charge of a child within 24 hours of any request by a child to be recognized or treated as the opposite sex, to use a name or pronouns inconsistent with the child’s sex, or to use a restroom or changing facility designated for the opposite sex.

Republican Texas Governor Greg Abbott has not taken a side on the topic, and has not indicated whether he would sign a bill if it came to his desk. Time reported Thursday that Republican lawmakers in four other states have already introduced similar bathroom-related bills: Alabama, Missouri, South Carolina, and Washington.