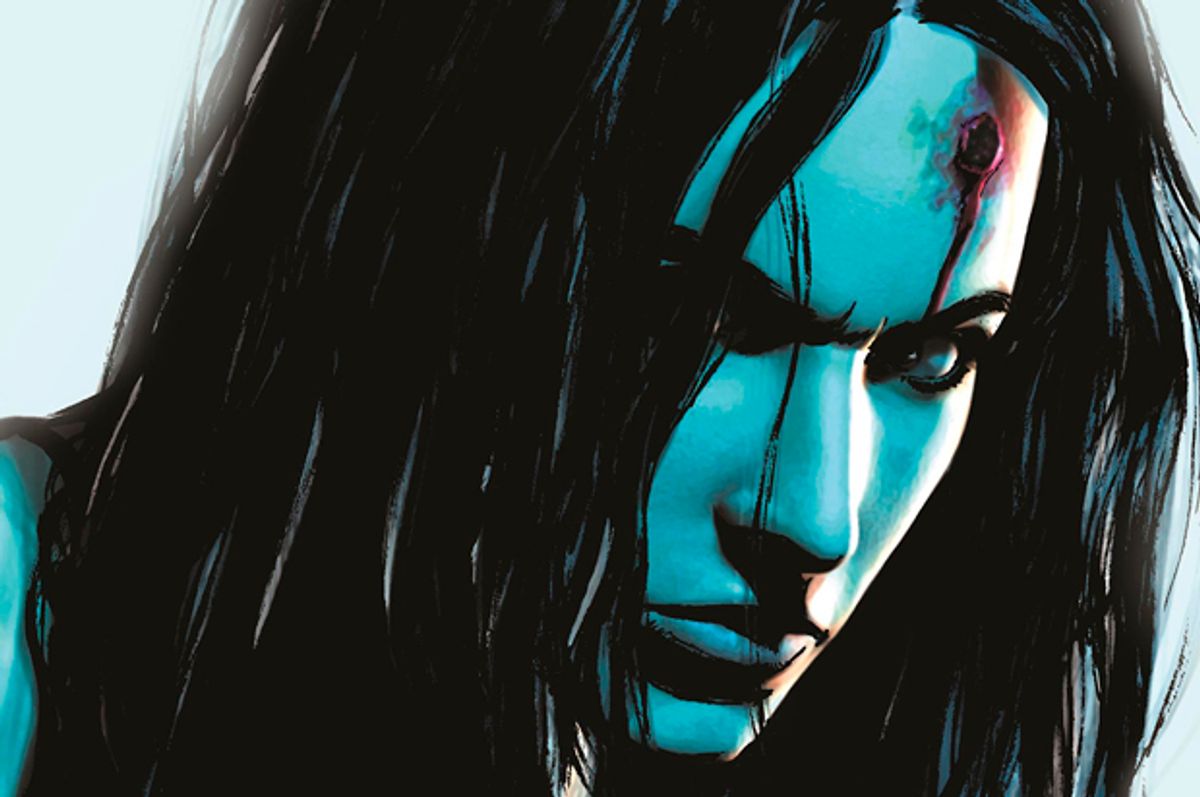 Since 2013, Greg Rucka and Michael Lark’s “Lazarus” has told a dystopian sci-fi story about Forever Carlyle and her family. In this world, wealthy families like the Carlyles control everything, and each has a Lazarus (a synthetic, self-healing warrior) to fight their battles. Forever is her family’s Lazarus, and the comic follows her attempts to defend her family, figure out who she really is, and decide if that family is worth fighting for.

In addition to being a compelling story that’s up there with the best TV dramas, “Lazarus” is newly relevant thanks to the election of Donald Trump. Rucka and Lark have created a world where the rich have even tighter control of their world than in this one, and where the poor suffer as much or more. As the real world feels ever closer to dystopia, “Lazarus” is a powerful warning against where we could be headed.

In “Lazarus,” the only governments are families, which each control a territory divided into domains. If you’re a member of one of these families, life is excellent, especially if you’re a Carlyle; you have access to life-extending drugs and the protection of the fearsome, badass Lazarus. If you’re not in a family, you might get to be a serf if you have some value to the family. Serfdom, relatively secure but contingent on the generosity of the families, is the middle class of the Lazarus universe. If you have no value, you’re just waste — and treated as such. Americans are notoriously unable or unwilling to think about class, but this riveting comic could help us out.

The power of class is driven home by population counts that appear every time the series changes setting; a caption lets you know the number of family members, serfs and waste present, implying much about the value of each location. Most of the nicer places have two or three family members, a few dozen serfs, and no waste. The worse the location, the more waste, and the less chance a precious family member would show their face and risk their neck.

In an early issue, Forever is touring her brother Jonah’s domain of Los Angeles, which suffered an earthquake at some point and is still a ruin. She chides him for running a domain that looks like a “war zone.” His response is telling: “We rebuilt what the family needs. There’s no point in wasting resources on waste who can’t appreciate it.” It’s easy to imagine similar words coming out of the mouth of a real-life politician sitting on a golden toilet.

The main characters in the series are the Carlyles, who appear to be slightly better people than some families, slightly worse than others. The villainy of other families (such as the mega-evil Hock clan) are more mustache-twirly to be sure, but their campy wickedness serves to frame the more  familiar evil of the Carlyles. The Family's most obvious advantage over their serfs and waste is the medical technology that allows for long life with virtually no sign of aging. The parallels are too close for comfort considering that the privileges of our world have long been available to the wealthy. Our richest are already living much longer than our poorest, and the gap is widening.

The Lifts are one of Rucka and Lark’s most effective ways of showing how much the world of Lazarus lacks. A Lift is a type of audition, but the stakes are your life role and pretty much your life. In the second story arc, we follow the Barrett family on the way to a Lift in Denver. One of them dies along the way. The rest catch a break thanks to Michael Barrett having limited medical skills; his talents get the attention of some nuns who work for Carlyle. This allows the whole family to skip a line that contains at least a hundred thousand people.

The Lift is well-named; the Carlyles probably feel like they’re doing a good thing by giving waste a chance to be lifted into relative prosperity. But there’s no consideration for the thousands of people who lack the skills to be a serf, or who die along the way, or are rejected for other reasons. Lark’s visual of the hordes headed to Denver is a tough, unsentimental rendering  of real life in America, where everyone is told they can lift themselves to success.

One of the most heartbreaking moments in the series features a particularly badass character, Casey Solomon, applying to be a Carlyle serf. Solomon passes every test of intelligence, physical ability, and so on, but she’s turned down for health reasons — not because of a pre-existing condition, but because of a likely future condition. Based on predictive diagnostics that are increasingly possible in the real world, Solomon was deemed likely to get breast cancer, so she would be a drain on resources and thus risky to lift. Let’s hope this isn’t a preview of Trumpcare.

Artist Michael Lark, best known for work on “Captain America” and “Gotham Central,” is the perfect illustrator for this series. His understated work is documentary in nature: the violence is never sensationalized, just presented. This approach is particularly effective when showing Forever’s abilities, which are both enviable and horrifying. It would be nice to recover from bullet and stab wounds while having access to spare body parts from a secret lab. It would not be nice to get shot and stabbed and Frankensteined back together over and over. Lark makes readers feel all the pain that Forever feels as well as that of other suffering characters.

Forever feels like a stand-in for all military servicemen and women, and her story is a dramatization of an old one: the rich sending their soldiers out to die while never getting near a battlefield themselves. Donald Trump may not have a personal murder-bot who he has brainwashed into thinking it is a real member of his family — as far as I know — but he had five deferments from the draft. Despite his tough talk as tweeter-in-chief, Trump avoided serving at any cost, which his family could afford. Minorities and the underprivileged don’t have that luxury and are still overrepresented in the military.

Forever Carlyle is their avatar, and while I wouldn’t advocate the poor eating the rich in real life, I cannot wait for the day when Forever turns her sword against her own family. Man, do they have it coming, as does every family in Rucka and Lark’s world — and more than a few in our own.