Why the Democratic leadership contest is urgent: It will shape the opposition to Trump 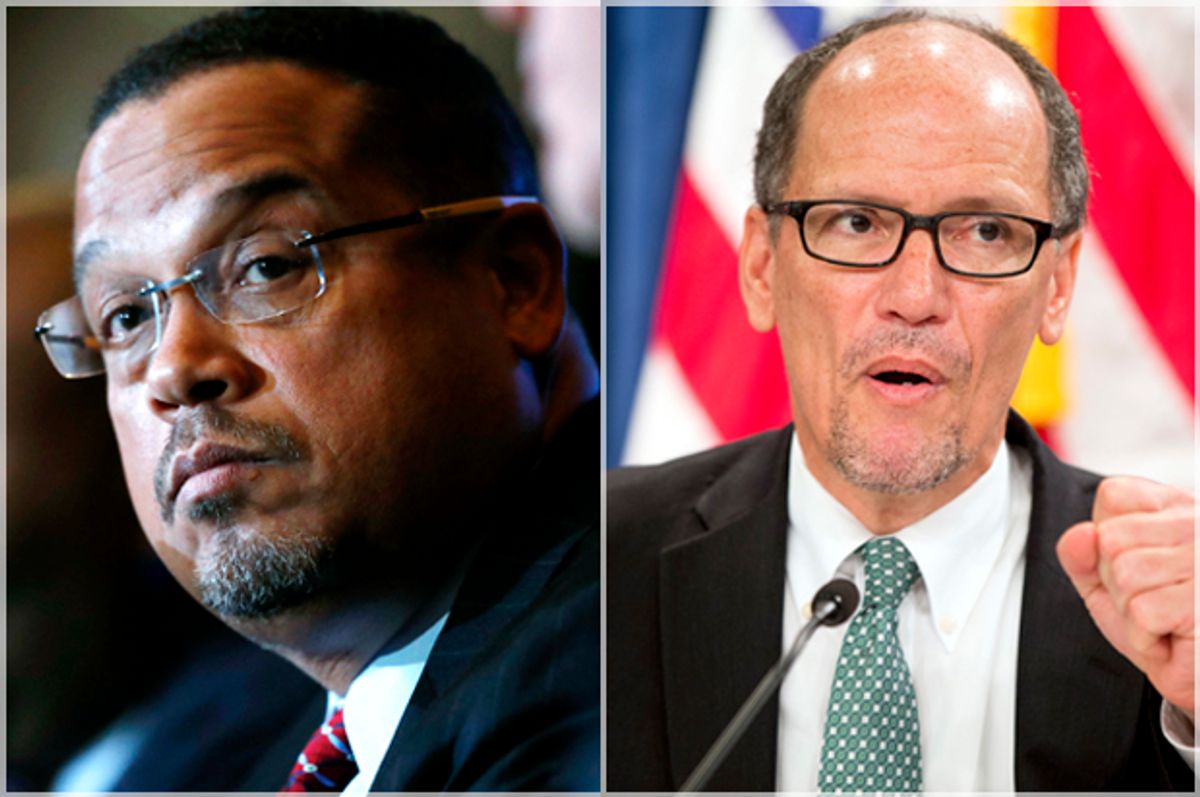 For some, the race for Democratic National Committee chair is a huge distraction from the all-hands-on-deck situation facing liberals and the left. After all, Donald Trump is about to be sworn in as president, with a GOP-controlled Congress eager to work with him.

In one sense such critics are right, as shown by how swiftly House Republicans backtracked from plans to gut the Office of Congressional Ethics in response to intense public outrage.

But there’s no escaping the fact that there is a race for the leadership of the Democratic Party, and it’s bound to have profound repercussions. Democrats were in a deep hole long before Trump came along. First in 1994 and then in 2010, Democrats suffered epic losses in Congress and state governments, after controlling the White House and Congress for two short years.

Those sweeping defeats betrayed a loss of historical identity: People no longer knew, with any certainty, just what the Democratic Party stood for. Successful leaders who defined themselves as "different" from past Democrats, other Democrats, or people's preconceptions about Democrats — Bill Clinton being the paradigmatic example — made this problem only worse for those involved in down-ballot races.

America’s in a deep hole too, with decades of income stagnation eroding its middle class, as donor-chasing Democrats increasingly fled from bedrock economic issues. Four decades of that gave us Donald Trump: He filled a vacuum, but he didn't create it. So fighting him alone is a fool’s errand. The vacuum will still be there, even if Trump can be stopped. Who dares imagine what it will bring forth next?

That’s why the race for the DNC chairmanship matters. It's not just a fight over who's going to lead the opposition party under Trump — although installing Rep. Keith Ellison of Minnesota would go a long way toward unifying the party. Current Labor Secretary Tom Perez, who seems like a overwhelmingly decent person, would presumably represent more of an accommodation with the capital-friendly Clinton Democrats of the recent past.

But there are questions beyond the choice of Ellison versus Perez: Are the Democrats a neoliberal reform party, whose privatization-prone big-city mayors tolerated the Occupy movement for a few weeks or months before cracking down? Or will they return to the social democratic roots that made them politically dominant for decades, from the eras of Franklin D. Roosevelt to Lyndon Johnson?

Folks who recognize that larger struggle — whether consciously or instinctively, or groping somewhere in between — are not ignoring or minimizing the danger of Trump. They are responding to the greater danger of the vacuum that Trump has filled for the moment and the prospect of further monsters it could easily bring forth.

That’s not to argue that there are sharply visible ideological differences between Ellison and Perez. Right now we lack the clarity to distinguish the significant fault lines within the Democratic coalition, deeply buried as they are. In an era dominated by neoliberal thought, its arguments and assumptions appear commonsensical, even after repeatedly leading us astray.

Social democratic arguments, on the other hand, might not seem like arguments at all, but only as emotional appeals, because they’re framed in terms we no longer understand. Neoliberal attitudes about the nature of the American economy or the global economy under capitalism have become so dominant as to become invisible, as water is invisible to fish.

As explained by historian and philosopher Philip Mirowski, neoliberalism is a coherent body of ideas developed by a specific group of institutionally supported thinkers. It “dates from the 1940s, if not a bit earlier," he has written, "and is a general philosophy of market society, and not some narrow set of doctrines restricted to economics.” Mirowski has provided a list of some of its core ideas “in truncated form,” the first four of which are as follows:

1. "Free” markets do not occur naturally. They must be actively constructed through political organizing.

2. The market is an information processor, and the most efficient one possible — more efficient than any government or any single human ever could be.

3. Market society is and should be the natural and inexorable state of humankind.

4. The political goal of neoliberals is not to destroy the state, but to take control of it and redefine its structure and function, in order to create and maintain the market-friendly culture.

This subset of core neoliberal ideas can at least be plausibly adopted for progressive ends, and that’s precisely what a dominant group of Democratic elites have been doing done since the era of Ronald Reagan, in various ways and with varying degrees of success. That includes Bill and Hillary Clinton as well as Barack Obama, along with the vast majority of talking heads who appear on MSNBC. But other core neoliberal ideas outlined by Mirowski limit how far this project of progressive neoliberal reform can go.

First, there is a devaluation of citizenship: No contradiction is seen between the role of the public and political citizen and the role of the private entrepreneur and consumer, because the latter does and should eclipse the former.

Then there is the promotion of a pernicious concept of freedom and ideas that come with it, leading to the privileging of capital and the celebration of inequality. The most important virtue under neoliberalism, Mirowski has argued — more important than the principle of justice or anything else — is freedom, defined “negatively” as the “freedom to choose,” and most important, as the freedom of corporations to act as they please.

Capital is understood to have a natural right to flow freely across national boundaries — while labor possesses no such right. Inequality — whether of resources, income, wealth or even political rights — can be conceived of as a good thing. It prompts productivity because people envy those who are rich and emulate them; people who complain about inequality are sore losers or old fogies, who need to get hip to the way things work nowadays.

As Mirowski has argued extensively, these ideas have been all tightly interwoven over time, and cannot easily be teased apart or dealt with in isolation. They come as part of a whole package that has been more than three generations in the making. That whole package is what is now in dispute — not just inside the Democratic Party, but around the world.

This is the “McWorld” side of the "Jihad vs. McWorld" struggle that Benjamin Barber warned about in the 1990s. In the war between neoliberalism and ethno-nationalism, both feed on each other and gang up against social democracy, as Barber argued. President-elect Donald Trump and Russian President Vladimir Putin epitomize the results at their worst, fusing toxic elements from both sides. The fact that neoliberal politics offers no way out of this larger dynamic now threatens the survival of America and indeed the entire world, not just the Democratic Party.

This is not to argue that Ellison and Perez consciously represent opposite sides of  a debate on neoliberal ideas. During this leadership contest they are unlikely to mention such issues directly but most certainly lurk in the background.

There are no apparent or sharply visible ideological differences between Ellison and Perez. As Jeff Stein recently noted for Vox about Perez:

He was an ardent foe of the Iraq War within weeks of it being declared; he has longstanding connections to the labor movement and the “Fight for $15” minimum wage campaign; he’s widely considered Obama’s most liberal Cabinet member; union leaders have loved his work.

None of that brings into focus the core neoliberal ideas Mirowski has laid out — ideas that box in human beings as mere cogs in a universal machine, whose glory they celebrate. Here are three more core ideas along those lines, all illustrating that when neoliberal ideas are pursued all the way, they conclude with the principle that ordinary citizens do not and should not matter:

The first of these is that corporations can do no wrong, by definition. The second is that the market, when correctly engineered and promoted by experts, will always provide solutions to problems caused by the market in the first place. There is always “an app for that.”

Finally and crucially, there is no difference between what is and what should be: “Free” markets should be (normatively) and are (positively) the most efficient economic system, the most just way of doing politics, the most empirically true description of human behavior and the most ethical and moral way to live. Which explains and justifies why the neoliberal conception  of a “free” market should be, and increasingly is, universally enforced around the world.

What the Democratic Party desperately needs is a root-and-branch rejection of the entire neoliberal worldview. It stands against its core constituents at every turn. I’m not arguing that a race for party chair should be interpreted as a contest about all the above themes and ideas. Contesting core ideological questions is not really the party chair’s job.

But the job can and should be about creating space and capacity for the party to reinvent itself, challenging those ideas from the bottom up — which is what Keith Ellison promises to do. If the Democrats can't do that, then perhaps the party deserves to die, so that something more suited to the urgent needs of the day can take its place, as the Republican Party replaced the Whigs during the national crisis that led up to the Civil War.