Grassroots organizers are frustrated, seeing a party not rising to urgency 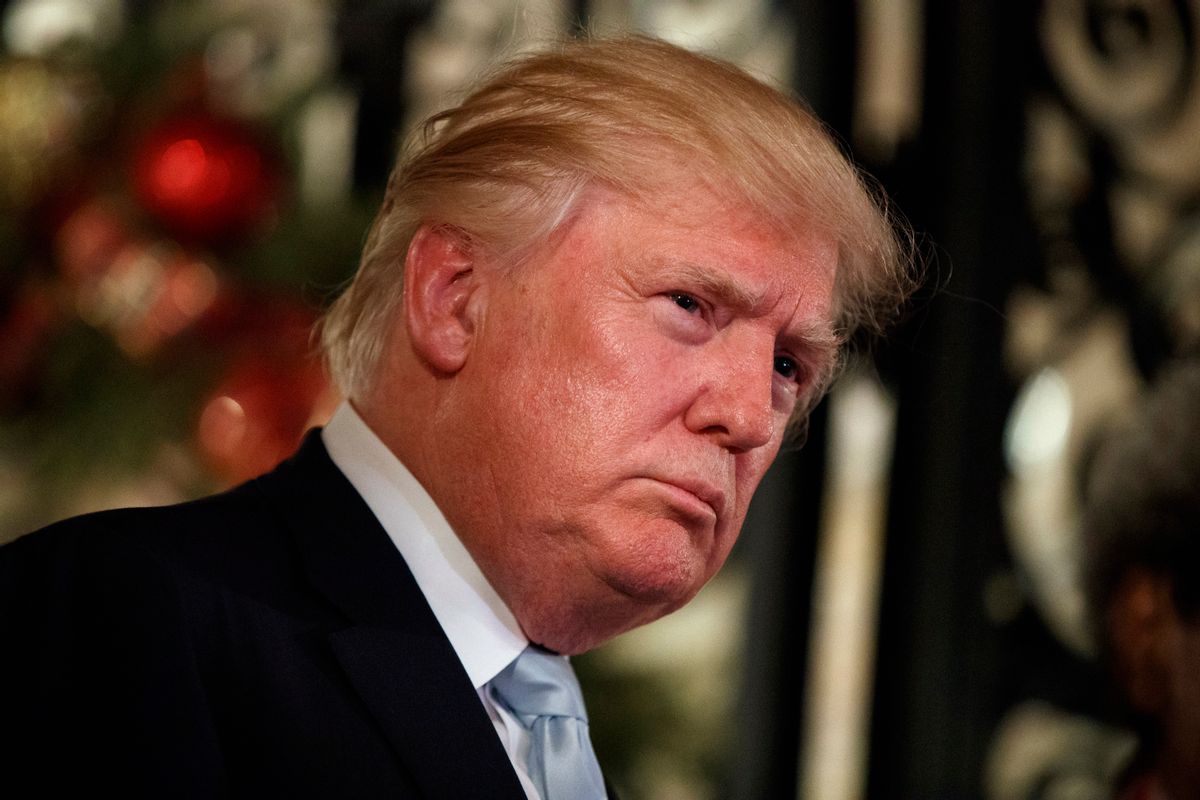 FILE -- In this Dec. 28, 2016 file photo, President-elect Donald Trump listens to a question as he speaks to reporters at Mar-a-Lago, in Palm Beach, Fla. Trump gave a videotaped deposition on Thursday, Jan. 5, 2017, for a lawsuit stemming from a clash with a celebrity restaurateur at his new Washington hotel. It was a rare legal proceeding for a president-elect or sitting president that highlights the legal woes that could follow Trump to the Oval Office. (AP Photo/Evan Vucci, File) (AP)
--

The vast majority of congressional Democrats don’t want to take a final stand against Donald Trump’s election, even a symbolic move telling Americans why they believe his presidency is illegitimate, at Friday’s ratification of the 2016 Electoral College vote.

Despite GOP-led voter suppression that civil rights activists say deterred millions of people of color, Russian actions that helped Trump and hurt Democrats, and a new report revealing that 50 or more of Trump’s presidential electors were illegally seated—amounting to vote fraud by a party that bludgeons Democrats on that very issue—grassroots activists said they could not find one senator on Thursday willing to commit to signing a formal Electoral College challenge.

The activists said several House members were willing to sponsor a formal challenge, just as Rep. Stephanie Tubbs-Jones, D-OH, did in 2005, opposing ratification of Ohio’s 2004 Electoral College votes. But they could not find a senator like Sen. Barbara Boxer, D-CA, who led that body's challenge back in 2005. If one House member sponsored the objection, and a second House member and one senator signed on, the joint session of Congress convened to ratify the results would adjourn and the House and Senate would hold a two-hour debate.

That’s what happened in 2005. Tubbs-Jones and Boxer lectured their colleagues on GOP voter suppression efforts in Ohio and other partisan efforts targeting presumed Democrats and their ballots. It didn’t stop President George W. Bush’s re-election, but it made a symbolic point that Democrats were willing fight for voting rights. Boxer said she did it because she was disgusted with what happened in Florida in 2000, when the Supreme Court stopped the recount and awarded the presidency to Bush.

Notwithstanding any last-minute changes of heart or courageous impulses, it’s not likely Democrats will make a parallel high-profile stance protesting Trump’s election. Skeptics may ask, what is the point if it changes nothing? But that is not how the activists pushing for an Electoral College challenge see it.

Civil rights activist Ruby Sales has been lobbying the Congressional Black Caucus to seize the moment to tell Americans that they will stand up for voting rights. Ryan Clayton, part of the Hamilton Electors movement that urged Republican Electoral College members to pick a more fit president, was promoting the research revealing that more than 50 Trump electors were illegally seated, underscoring GOP hypocrisy on policing voters. And even as the country is still learning about Russian hacking, Rep. Ed Perlmutter, D-CO, issued a statement Thursday saying he would address foreign interference in elections.

But as Ann Massaro, co-founder of Women and Allies and part of the coalition seeking a challenge on voter suppression grounds, said, the push to tell the nation why Trump is an illegitimate president is not coming from elected Democrats.

“All of this is happening as a result of a grassroots movement of people, of grassroots movements, on the phones, and letters,” she said. “We hand-delivered letters to members of Congress who were most likely, because of their voting record, to stand up and do this—Democrats…There is going to be a very large grassroots movement growing in this country like we haven’t seen since the war in Vietnam or the civil rights movement.”

As Clayton said earlier this week, you can be sure the Republicans would be screaming constitutional bloody murder if the opposite were happening—if Congress were convening a joint session to ratify Hillary Clinton’s election after 50 Democratic electors were found ineligible to cast the Electoral College votes making her president. The arguments, information and analyses that Clayton, Massaro, Sales and others are citing are not being embraced by Democrats at large or Republicans of conscience.

Just as the Democratic National Committee and the Clinton campaign did not lead the recount in Wisconsin, Michigan and Pennsylvania, the party’s congressional leaders are showing that they are not prepared or willing to take on Trump and the GOP with the urgency grassroots progressives say is required. We will see what unfolds Friday afternoon, after many in Congress spend the morning hearing intelligence agency testimony on Russian actions. Perhaps one senator will step forward and join House members to protest Trump’s election.

The press secretary of the one Democratic senator many grassroots activists were pinning their hopes on, New Jersey’s Cory Booker, did not respond to an email inquiry seeking his position. By 5pm on Thursday, another staffer in Booker’s office said he had not yet taken a position.