Yes, Donald Trump's voters may be confused and in pain — but no, they don't deserve our empathy

Some Trump voters may well feel traumatized by historic and economic change. But that's no reason to forgive them 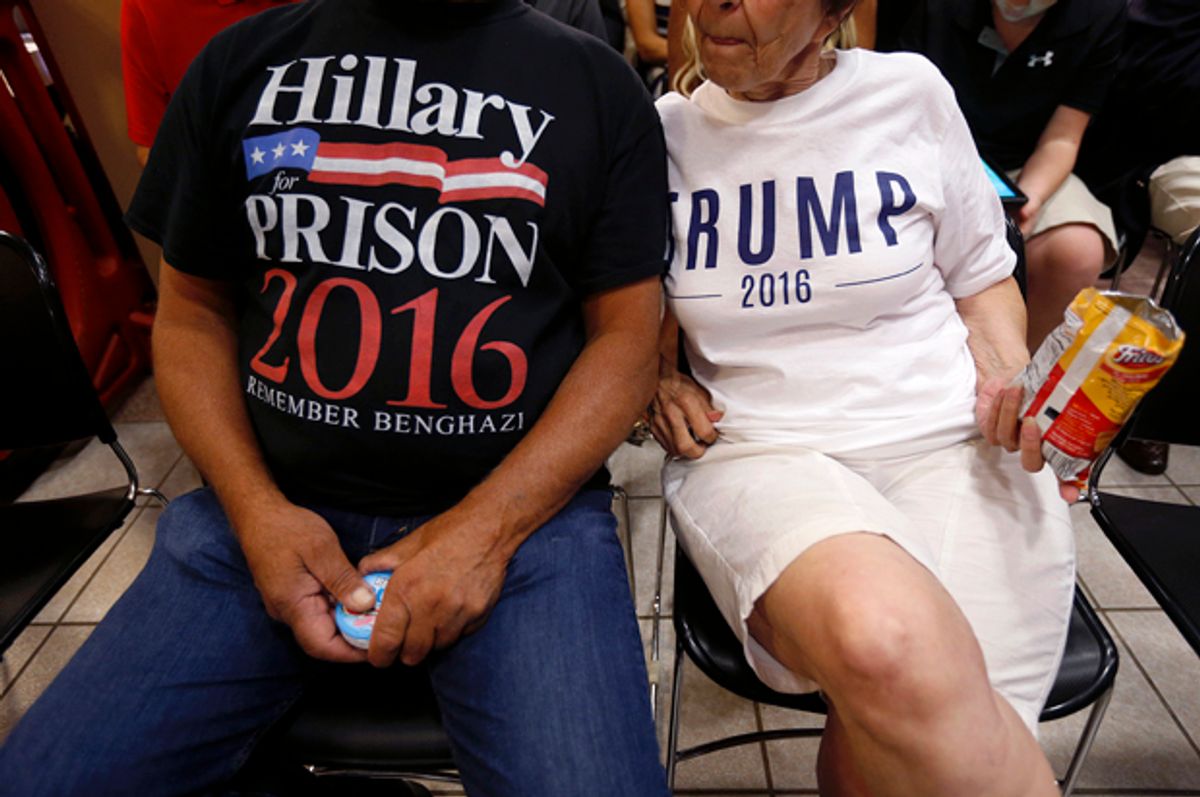 I have been transparent and direct regarding my feelings about Donald Trump and his voters. I have explained how they are on a collective "highway to hell" and are dragging the country with them. I have also detailed that Donald Trump can legitimately be viewed as a traitor who encouraged a foreign power to interfere with the 2016 presidential election to his benefit, and who views the basic tenets of American democracy with contempt. By implication, those people who voted for Donald Trump and who have not yet disavowed him are traitors as well.

Nothing that has occurred since Trump's election has altered my conclusions. If anything, I am more resolute in those beliefs. But like many Americans, I am still struggling with basic questions of empathy and how we as a people can move forward together in the age of Donald Trump. This is a practical imperative. It is also a function of my belief in and commitment to the principles of secular humanism and liberal democracy.

Writing on Tuesday here at Salon, my colleague Conor Lynch offered the following observations about the importance of empathy in this political moment.

[It] is important not to fall into the erroneous and destructive mindset that every single person who cast their vote for Trump is an enemy, or should be considered as such. To think this way would be a grave mistake — not just politically, but morally.

Those who rightly view Trump as their enemy must not lose their capacity for empathy. While resisting Trump, it is vital to understand why so many people who will, in all likelihood, suffer from his administration’s policies voted for him anyway. Of course, a sizable amount voted for the billionaire because of his bigotry and chauvinism, not in spite of it — and these people don’t deserve any kind of sympathy. But a great number of those who voted for Trump did so out of sheer desperation, not because they are white supremacists or fascist sympathizers.

Trump knows who his enemies are, and there’s no telling how he will use the presidency to seek revenge. His enemies are legion, of course, and just about anyone who criticizes him publicly can count themselves as a foe. Those who oppose him must encourage empathy and promote a politics of solidarity — but it is equally important to know who your true enemies are, and treat them accordingly.

These are important insights. But we must also be cautious about the best way to balance the practical and messy work of day-to-day politics and coalition building with more abstract principles and virtues.

Speaking to the former, the statement "a vote is a vote" is a truism. A candidate does not necessarily care if a voter agrees with all his or her policies, is otherwise hostile to them or is a good or bad person. To paraphrase David Mayhew's famous dictum, politicians are single-minded seekers of reelection. Winning is the main goal.

The practical lessons that were taught by Donald Trump's defeat of Hillary Clinton are important as well. The data demonstrate that Trump did not win because of a national backlash from the "white working class." Instead, Trump benefited from a geographically specific statistical fluke, combined with voter suppression and relatively low Democratic voter turnout. The so-called "white working class" vote is a type of unicorn or Great White Whale for the Democratic Party. Moving forward, the party's resources and energy are better spent by mobilizing its base and refining its message than in obsessively trying to win the support of a substantial but declining segment of the population that has become solidly Republican.

On a philosophical level, pleas for empathy towards Donald Trump's voters must be weighed according to how they address basic questions of privilege, respect and human dignity. Let me explain.

Trump has promised to expand an even more violent, predatory and unconstitutional police state against blacks and Latinos in the interest of being "tough on crime." Trump has also said that he would deport millions "illegal aliens" (code for undocumented laborers from Mexico and other Latin America nations, a group he considers to be natural rapists and murderers). The incoming president and his advisers have also praised the internment of Japanese-Americans during World War II -- a human rights crime for which the government has since apologized and paid reparations. During the campaign, Trump suggested banning Muslims from the United States, and while he appears to have backed away from that proposal, he supports creating a kind of "enemies list" for Muslim immigrants who already live here.

These actions would imperil the safety and security of many millions of people. They are also a violation of basic human dignity and civil rights. Donald Trump's voters support such policies, explicitly or otherwise, and are responsible for electing the candidate who made such threats the foundation of his campaign. To ask the future or present victims of Donald Trump to empathize with his supporters is morally perverse. Moreover, even to expect such a thing likely reflects a position of social privilege, where it will not be you, your family or your community who will be made to suffer under Donald Trump's policies.

But the role of empathy in the political and social circumstances that made the election of Donald Trump possible should not be ignored. Writing at Psychology Today, Michael Bader explains that the "failure of our institutions to empathize with the plight of the middle and working classes, to recognize their sacrifice and reward their hard work," has produced a kind of societal trauma:

Adults, like children, try to cope with the stress of failures of recognition in the best ways they can. They certainly get anxious and depressed and may turn to drugs and alcohol to manage these painful feelings. In addition, when social trust is weakened and people are isolated, they try to find ways to belong, to be part of a community. The Tea Party is one such community. Others turn to their church communities. Their social brains seek an experience of “we” and often do so by creating a fantasy of a “them” that they can devalue and fight. Tribalism draws from our need for relatedness but, tragically, can also pervert it. Rejected by employers and government, they reject and demean others. All the while, they are trying to deal with the pain, powerlessness, and lack of empathy that they experience in their social lives.

Donald Trump clearly spoke to this pain. He empathized with the traumatic losses and helplessness of the white middle and working classes. He helped them feel part of something bigger than themselves, a “movement,” which combatted their isolation. And he helped them restore a feeling of belonging by positioning them against demeaned others, primarily immigrants and countries on the other end of “horrible trade deals.”

The research on the development of empathy and the trauma resulting from its absence, on the links between economic inequality and physical and psychological suffering, and on the corrosive effects of social isolation has to lead progressives to renew their campaign for radical reforms of our economy and politics.

There is a sickness in America's political culture. It was brought about by systemic problems rooted in neoliberalism, the politics of economic austerity, a frayed and broken social contract, and an assault on the very notion of political community and civil society. The ascendance of Donald Trump is a symptom of these troubles, but not the cause.

Ultimately, however, Donald Trump's voters made a moral decision. They chose to support a candidate who is a clear and present danger to American democracy and to the core values of our pluralistic, multicultural and cosmopolitan society. In the spirit of "personal responsibility," these people must be held accountable for their decision.

In a perfect world, Trump's voters would prostrate themselves in public and apologize for their decision to support him. This will not happen.

Trump's voters could also look at the wealthiest cabinet ever assembled, his betrayal -- which is already evident -- of his promises to "drain the swamp" and his obvious lack of the preparation and temperament necessary to be the leader of the free world, and admit that they were wrong. Again, this will not happen. When confronted by the facts, Trump's voters, as a reflection of the Dunning-Kruger effect and the phenomenon known as "information backfire," will simply redouble their investment in their hero.

It would seem that shared concerns in the service of self-interest will have to be enough. But given Trump's Svengali-like hold on his followers and the way American conservatism and the Republican Party now function more like a cult or religion than a responsible political philosophy or organization, such temporary alliances of convenience are also unlikely.

Cooperation is dead. Trumpism is alive. This may be the epitaph of American democracy -- and expending useless empathy on Donald Trump's supporters will only hasten its demise.