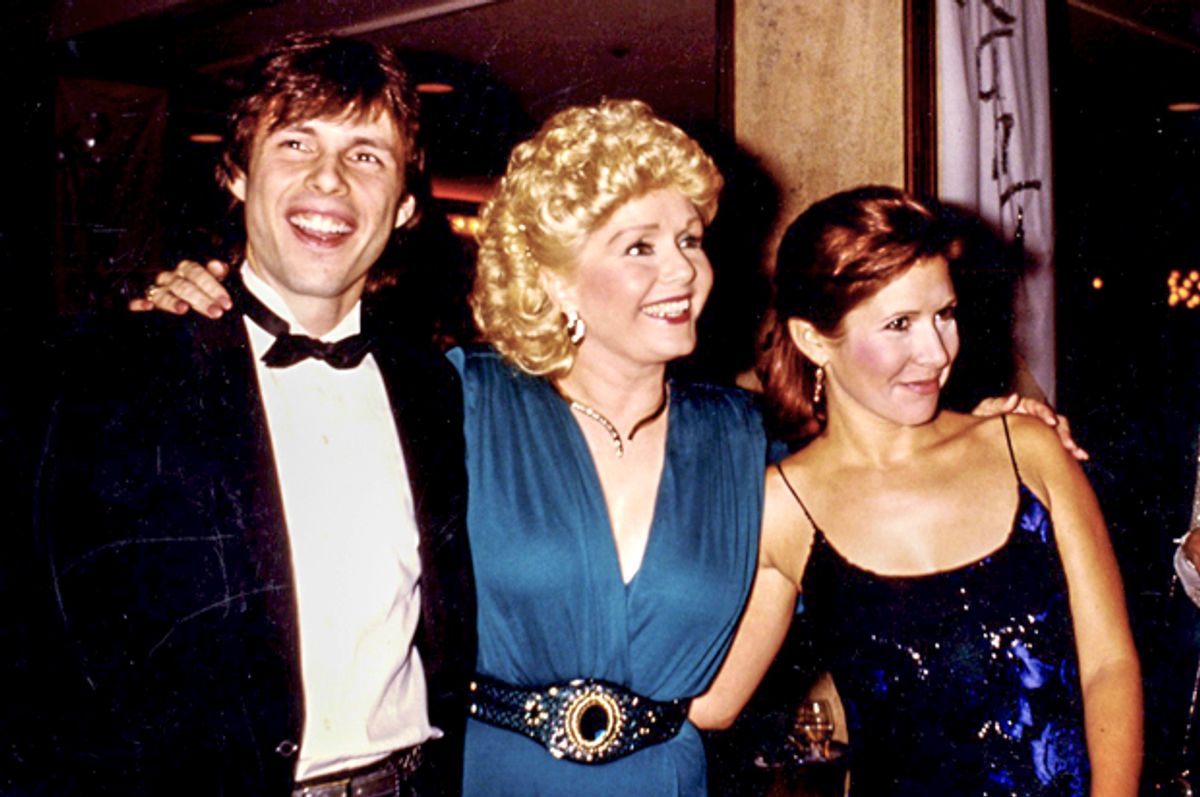 Part of our collective fascination with actress Carrie Fisher and her mother, Debbie Reynolds, has to do with what they symbolize. The women embodied the archetypical functioning mother-daughter bond, in a sense. That is, a link that is often dysfunctional, sometimes strained and broken, but if a person is lucky, achieves some measure of harmony in the end.

Together and separately, Fisher and Reynolds weathered an array of tabloid scandals and personal turbulence. At times their names were more closely associated with visions of rivalry than parental-filial affection. Contentious as their relationship could be at times, “Bright Lights: Starring Carrie Fisher and Debbie Reynolds,” a documentary premiering at 8 p.m. EST Saturday on HBO, leaves no doubt as to how intensely these women lived for one another.

They already demonstrated that to the world in the most gutting fashion imaginable by dying hours apart. Sixty-year-old Fisher, “Star Wars” icon and extraordinary writer, suffered a massive heart attack during flight home from London on December 23 and died a few days later, on December 27.

Reynolds, 84, passed away hours after her daughter’s death, on Dec. 28. A private memorial for both reportedly took place on Jan. 5. One popular speculation posits Reynolds was done in by a broken heart. Todd Fisher, Carrie’s brother and Reynolds' son, refuted that in a “20/20” interview with Elizabeth Vargas that aired on ABC days after his mother's death.

According to him, Reynolds “said that she really wanted to be with Carrie, in those precise words. And within 15 minutes from that conversation, she faded out. And within 30 minutes, she technically was gone. . . . She literally went to sleep, and left.”

Watching “Bright Lights” makes either theory plausible. The Reynolds we meet there — circa 2014, when filming took place —  is an unstoppable force. If she wanted to do something, she did it.

Reynolds, the star of such film classics as "Singin' in the Rain" and "The Unsinkable Molly Brown," is  all sun rays and sparkle for the camera even when, as it happens in one scene, her house alarm is screeching relentlessly behind her. Her voice twinkles with a dignified clip whether she’s playing the passive-aggressive carping matriarch or running through her jokey monologues during her cabaret act. She’s the prim, gracious librarian to Fisher’s raspy-voiced, irreverent wordsmith, and one appreciates and accepts the other’s mojo even if they don’t completely get why the other person does the things she does.

Reynolds also works herself to exhaustion in the film, gliding through a casino nightclub act in one scene that leaves her barely able to descend a staircase after the curtain drops. It drives Fisher crazy. But she admits she might as well be throwing herself in front of a tsunami.

“She’s tsu-mommy!” Fisher quips in the opening moments of the film, just before walking a home-baked soufflé down a hill to the force of nature she calls mother. They lived next to each other in the same Coldwater Canyon compound, and as Fisher heads over to mama’s house, she explains, “I usually come to her.” Then she takes a beat and deadpans, “I always come to her.”

Originally scheduled to premiere in March, “Bright Lights” is a mirthful portrait of Reynolds’ and Fisher’s extraordinary connection above all else, even as it reminds viewers of the toll attachment can take on a body and spirit. Clocking in just shy of 95 minutes, “Bright Lights” invites us to spend time with these women in their unguarded moments and consider the ways that the passage of time and the vagaries of fate mellow most resentments.

The documentary breezily wanders through unavoidable landmarks in the stars’ family story – Reynolds' abandonment by Carrie’s father Eddie Fisher to shack up with Elizabeth Taylor in the late ’50s, Fisher’s craggy and doomed romance with Paul Simon and her bouts with addiction and manifestation of bipolar disorder being among the most significant. That chapter in particular may be the most compelling; as an old movie shows Fisher soft-shoeing her way down the path on the Great Wall of China in a manic mood, she notes, “One mood is the meal, the next mood, the check.”

Instead of spending too much time retreading these amply traversed roads, directors Fisher Stevens and Alexis Bloom chose to train their focus on the bond these women share, one that veers between interdependency and codependency. (Note: This paragraph has been corrected since its original publication.)

Doing so allows the viewer to steep in the ferocious intimacy these two women shared, something no other accounts were able to achieve. Quite a feat, when you consider that among Fisher’s fictionalization of their lives in her novel “Postcards from the Edge” (which became a movie in 1990); a gauzy Lifetime “Intimate Portrait” profile of the pair that aired in 1998, Fisher’s one-woman show “Wishful Drinking” (which became an HBO special in 2010); and “Bright Lights,” theirs may be one of the most prolifically documented and closely dissected mother-daughter acts of our era.

Most of what we know about Reynolds' and Fisher’s romances and tribulations come from page and screen, however. Younger generations worship Fisher as Princess Leia, and she humbly respects their reverence even as she refers to convention autograph signings as celebrity lap dances.

Older entertainment fans still pay homage to Reynolds as one of the last great silver screen goddesses, a designation she’s loathe to give up even though an hour or two onstage drains her of all vitality. Fisher was used to her mother’s stubbornness, admitting at one point that “performing gives her life. It feeds her in a way that family cannot. . . . People aren’t cooperative. Audiences are. When you’re her, they are.”

The heartbreak of this is in seeing that Fisher could not call upon that sustenance, even as Reynolds insistently set a place for her at the table. In one glimpse of archival footage, a teenage Fisher joins her mother onstage, flashing a perfectly feigned smile before belting out a soulful rendition of “Bridge Over Troubled Water.” Reynolds, flummoxed by her daughter’s refusal to pursue a singing career, wells up at the sound of it. The viewer, though, may be struck by the odd kismet of it all; a short time in the future, the 15-year-old in that film would marry the man who wrote that song.

There are a number of unintentional moments of foreshadowing in “Bright Lights,” which comes with the territory of meditating on aging and legacy. Knowing what we know now, Fisher’s off-the-cuff observation that she loves Christmas, because her mother is Christmas, is sweet and shattering in one swipe.

Fisher may have bridled at being raised in the shadow of a Hollywood giant, rarely receiving shelter from the limelight. She and her brother Todd may be remembered in part for having what she calls “a shared history of weirdness.” “Bright Lights” plucks her star and that of her mother down from distant heights and lets us gently hold them for a time, reassuring us that their brilliance and humanity was real, their mutual endearment unbreakable.