HGTV loves a Tiny house; you do too, but in the communities that need them most they're outlawed

Society is moving faster than the law in housing; tiny is affordable, and darn cute, but you probably can't have it 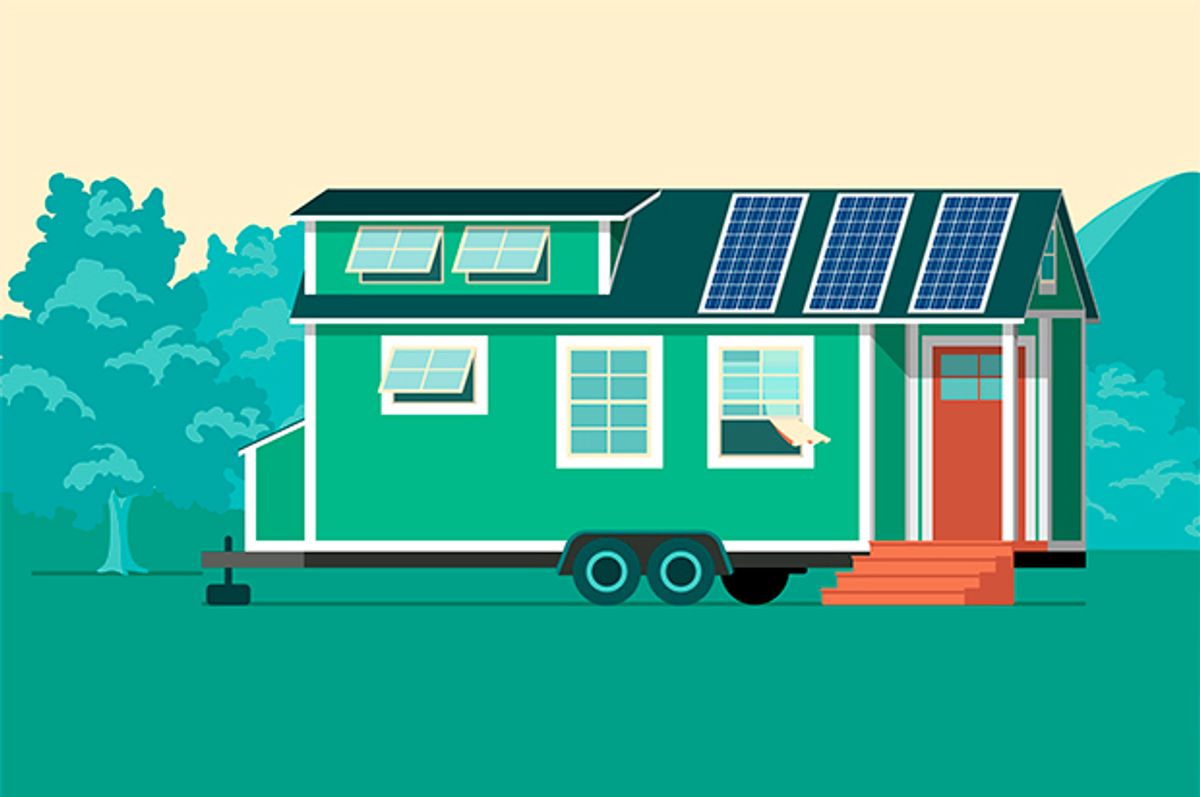 While America might be known for its philosophy of expansion, a growing number of citizens are diligently trying to reverse-engineer Manifest Destiny. Much of the focus on people who opt to live in tiny houses is written by gawkers who focus on their chic designs, radical downsizing, and feasibility. However, living tiny is literally about as close to a grassroots movement as one can get, and proponents are actively engaged in advocacy with local governments to realize their vision of decentralizing materialism. With a groundbreaking proposal to amend the International Residence Code — which is the model code for the majority of residential construction in the United States — submitted by movement leaders last fall, 2017 might be the year that sets up this niche market to go mainstream.

“Tiny House communities or pocket neighborhoods provide the opportunity for closer human connections, sharing and intentional communities, and a release from the 'work to live' trap so many of us are ensnared in,” says Cy Englert, who administers the popular online group Tiny House Community.

Escaping the work-to-live trap appeals to many, but it’s hard to enumerate an accurate sense of the movement’s boots-on-the-ground momentum. Who’s all in and who’s just engaged in escapist fantasies?

There are some key identifiers. The most visible are the binge-worthy television ratings. A representative for Scripps Network Interactive, the company that owns HGTV and DIY, told Salon that in 2016 tiny house programming attracted an average of more than 10 million total viewers during primetime each month. There’s a steep drop-off, however, offscreen. Many folks don’t want to reveal that they live in tiny houses because it could cause them trouble and jeopardize their security. HGTV super fans willing to make the tiny commitment might be heavily deterred by the fact that putting down roots is much tougher than the network's popular hour-long narratives reveal.

“If you build or buy a Tiny House, you face the stark reality that it is illegal to live in them full-time. So, the movement to provide affordable housing and simpler lifestyles is undoubtedly hindered until it becomes legal,” says Englert, whose Tiny House Community Facebook group boasts about 30,000 members. “Building codes and zoning ordinances need to change to accommodate smaller and tiny houses.”

Just because we’ve heard a lot about tiny houses since the 2008 economic crash where many people lost their homes, tiny habitation is still in the early-adopter phase. Unless you move into a pal’s back yard or live in an RV park, local zoning and code restrictions are a big bummer for the mobile generation's trendiest alternative to suburban McMansions and Manhattan high-rises.

“It's important to understand that zoning and code are two very different yet equally complex universes,” says Jay Austin, whose self-constructed 140-sq ft. home The Matchbox is part of one of America’s first tiny communities in Washington, D.C., called Boneyard Studios. “Zoning generally dictates what you can build where, while building code dictates how you can build it. Or, more often, how you cannot.”

Zoning can prove to be problematic for tiny house dwellers, but building to code requirements are worse, Austin says. For instance, with respect to zoning, a mobile, residential tiny house can't legally be placed on a vacant commercially zoned lot. This leads many folks to put them on wheels, where they’re governed by less constricting building code; however, parking becomes a major concern and most options are temporary. With respect to code compliance, “a whole lot of code just doesn’t make sense in a fairly unpredictable tiny house.” Regulations such as minimum square footage of bedrooms and kitchens can exceed the entire square footage of a tiny house. Plumbing and electrical code might require that homes be connected to city electric and water even if the house is capable of sustaining itself. Trivial things like the height at which outlets are placed or the number of them in a room can become “impossible to accommodate when space is at such a premium and furniture must be configured just so.”

“It's not that these issues are insurmountable,” Austin says. “Indeed, building a tiny house on wheels turns building code into more of a suggestion, but they're often so cumbersome and complicated that your average non-builder, non-architect, non-electrician will simply give up or second-guess themselves into inertia.”

Many tiny homes are constructed by do-it-yourself types, even though professional homebuilders in the tiny house business do exist. It’s significantly more expensive for a professional build, although residents might be more confident that they’re in compliance. The Tiny House Building Company in Fredericksburg, Virginia, notes on its website that they offer financing through a partnership with People’s Community Bank. Unique deals like this allow some to live tiny.

“I think the issue here is not necessarily a lack of demand, but a lack of demand commensurate to the supply of large-scale home builders,” says Austin. “Tiny houses are a rapidly growing market, but still a very, very small one. At this point, the volume might not provide sufficient economies of scale to well-established, non-bespoke home builders to be worth the initial outlays. That may or may not change as the movement grows.”

This sentiment was confirmed when Salon reached out to the National Association of Home Builders, where a representative for the organization said that not many of their members specialize in this niche field.

“Those who have the perseverance to figure this all out are generally pretty determined and pretty do-it-yourself, and this may be why so many folks looking to go tiny choose to build themselves, pulling some demand out of the established home-builder market,” Austin says.

A volunteer group known as the American Tiny House Association emerged in 2015 as a voice for change. They’re the definitive starting point for bringing the revolution to your town, and offer a useful “How to Initiate Tiny House-Friendly Zoning Changes” guide on their website.

At the local level, there’s evidence that this type of advocacy can be effective. Laura LaVoie is a popular tiny house blogger who is part of the volunteer-run Asheville Small Home Advocacy Committee in North Carolina.

“Because building a tiny house was the catalyst for major change in our lives, our real goal for starting the Asheville Small Home Advocacy Committee was to offer the city of Asheville another alternative to their housing crisis,” LaVoie says. “With a tourism boom, our city relies on service industry workers, but that same tourism boom makes it nearly impossible for those critical workers to live inside the city limits. There is a housing shortage, rents are high, and it's extremely difficult for someone making minimum wage or tips to buy their own home. Tiny homes offer the option of home ownership to these individuals.”

The group started when locals who were in various aspects of the tiny house community started talking to each other. They met with the city planning office and discussed viable options. In the summer of 2015, LaVoie says, Asheville made it easier for residents to build accessory dwelling units on their own property, which opens the door for backyard tiny home owners or renters.

“It was a great first step and felt like a real victory,” LaVoie says. “People often ask us how to start their own advocacy group. Honestly, the answer is pretty simple. Get together and start advocating for tiny homes. We had no community organization experience, we just felt strongly about the subject and began to organize meetings to discuss the options.”

“There is no value in being on the offensive when speaking to government officials since they are our elected officials who are responsible for satisfying the needs of their citizens,” he says. “Make it obvious that it is in their best interest to help to provide affordable but safe housing. There are pockets of success all over the country, so it can be done.”

For the cable news crowd that isn’t quite hardcore enough to do this kind of heavy lifting, HGTV Senior Vice President of Original Programming and Production John Feld has a plan for waiting it out.

“Declutter and reprogram your life,” Feld says. “Viewers are enamored with our lineup of tiny house programs not only because we show creative tips on living in smaller spaces, but they fantasize about getting rid of most of their junk. I think there is a tremendous amount of stress caused by filling up our 3,000-square-foot homes with stuff, and HGTV’s tiny house programs showcase how real people are happily embracing the tiny lifestyle.”