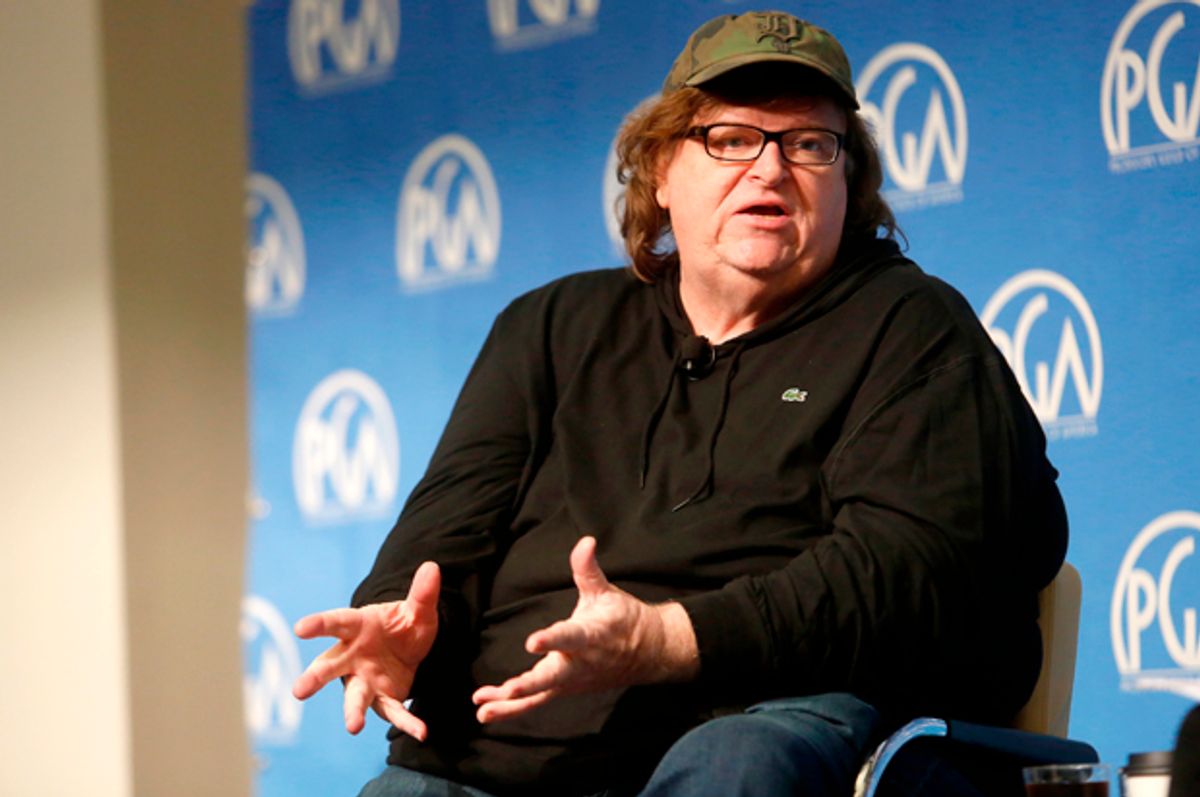 If I told you in 2015 that Donald Trump would win the presidency and Michael Moore would be the one person on the left to get it all right, you’d have told me I was nuts. While much of our attention has been drawn to figuring out how an orange-faced reality TV star who campaigned on sexist and bigoted rhetoric will be getting the nuclear codes in a matter of days, let’s forget about Trump for a minute and give Moore his due. Moore refused to be beaten down by the events of 2016. And he shows every sign of making 2017 better then we could have ever expected.

Moore spent 2016 as a major leader of the left — he read the signs right, offered creative vision, built community and gave us a model of engaged leadership. Even more important, he helped us laugh when we needed it.

Moore pulled all of this off in 2016 and he is showing no signs of slowing down in 2017. He is even planning an Inauguration Day surprise.

Because Moore is both a sharp public figure and an entertaining comedian he can effectively combine irony, satire, political commentary and activism. He has the substance, compassion and wit we need to counteract one of the dumbest, meanest, most egotistical presidents our nation has ever seen. He is the perfect foil for a reality TV president.

Trump might have been elected in 2016, but let’s hope it’s Moore who wins 2017. Here are five of his successes from the last year that can give us hope for the new.

1. Moore releases his most important film yet.

"Where to Invade Next" was officially released in 2015, in time to make the Oscar shortlist for best documentary, but it got its wider release on Feb. 12, 2016 — a date that coincided with Abraham Lincoln’s birthday and the New Hampshire primary.

“Where to Invade Next” is Moore’s best film yet. It combines a fiercely optimistic patriotism with a sharp, unflinching attack on the evils of American exceptionalism — and it does it all without shooting a single frame in the United States.

The film begins with the observation that the United States has not won a war since World War II. It then satirically imagines the Department of Defense calling on Moore to step in and save our nation. As Moore heads off to be our hero, his plan is to invade nations not to take them over, but to take their good ideas.

The film follows Moore as he travels through Europe and to Africa to connect with communities that get it right. He shows his viewers that, contrary to what we hear in the United States, there are indeed countries where debt-free education, paid family leave, women’s rights, public healthcare, prison reform and delicious school lunches are a common part of life.

What makes this film such an important achievement for Moore is that it goes beyond exposing the dark underbelly of our society and focuses instead on the politics of the possible. In a reversal of the typical arc to his films, “Where to Invade Next” starts with stories of success and moves to stories of struggle. At a time when our culture is dominated by fear-based politics, Moore offers us a vision of reasoned hope and practical optimism.

As we head into a Trump kakistocracy that promises austerity for us and privilege for them, the message of Moore’s film will be more important than ever.

2. Moore works to bring attention to the Flint water crisis.

In early January of 2016 news broke of the contamination of the water in Flint, Michigan. While there had long been signs that the water was contaminated, it was in early January that evidence was released of Flint residents suffering from lead poisoning, higher rates of Legionnaires Disease and a host of other health issues.

On Jan. 6, Moore took to action  via an online open letter to Governor Snyder and a petition with the hashtag #ArrestGovSnyder. While there had been some media coverage, especially from Rachel Maddow, it wasn’t until Moore focused on the crisis that wider media attention followed.

One week after Moore posted his open letter, Gov. Snyder sent in the National Guard to help with the disaster and was hit with a class action lawsuit.

Moore worked tirelessly to help get attention to the issues, attending rallies and even coming down with pneumonia. Flint, after all, is Moore’s hometown and the location of his breakout film “Roger and Me,” which focused on GM’s decision to close most of its plants in Flint and move those jobs outside of the country.

Refusing to allow the Flint crisis to fade away, he then published a piece on the “10 Things They Won’t Tell You About the Flint Water Tragedy, but I Will.” Even more important, he delivered the tough news that what Flint needs isn’t more bottles of water; what it needs is a revolution. “If you want to help Flint, sign the petition, demand that the federal government take action, and then get involved yourself, wherever you live, so that this doesn’t happen to you -- and so that the people we elect know they can no longer break the law as they rule by fiat or indifference," he said. "We deserve much better than this.”

Moore’s fight to hold politicians accountable for the suffering they cause citizens will be a much-needed call to action in the months to come. In an era where political comedians are often more trusted than journalists, Moore’s fight to defend Flint showed us how the new public intellectual can be an activist too.

In July of 2016, Moore delivered the tough news that he predicted Trump was on the path to winning. The Moore haters were quick to jump all over him for his crazy idea.

The haters are all pretty quiet now. Or else they are busy calling Moore to see if he has time for an interview.

Here’s the thing. At the time that Moore predicted a Trump win folks didn’t believe him for the very same reasons that no one saw Brexit coming. Moore didn’t want to be right about Trump, but given his own history growing up in Flint, Moore was well aware of the anger and resentment that had developed in the Rust Belt. He saw it coming, because he gets it.

The story of Moore predicting a Trump win is not just a story about Moore having a better sense of the citizenry in our nation than the pollsters and the pundits; it is also a story about how the Democratic oligarchy had adopted many of the habits of the right.

As Moore put it, they were “living in a bubble that comes with an adjoining echo chamber.” They refused to validate the real energy behind the Sanders campaign and they ignored the fact that Hillary was really unpopular. He explained that while many Sanders supporters would vote for Hillary, they would be depressed doing it. And that was how Trump would — and did — win.

Moore didn’t just see how Trump could garner support; he also saw how the DNC was botching everything up. At the time no one wanted to listen. Now it’s clear he had everything right.

With only weeks to go before the general election, Moore made his next bold move. He released “Michael Moore in TrumpLand,” a film of a one-man stage performance Moore delivered on Oct. 7 in Ohio. Tagged as "the film that Ohio Republicans tried to shut down," the film covers Moore as he enters Trump territory with the goal of convincing Trump supporters to switch their votes to Hillary Clinton.

When the film came out, many on the left were still wondering what they would do on Election Day. Embittered by the leaks about the various ways that the DNC tried to hamstring Sanders, Sanders supporters were grouchy. They were tired of being bullied by Clinton supporters and told that if Trump won it would be their fault.

Understanding those tensions is the real art of Moore’s film. It comes off as a film that focuses on those supporting Trump, but it is just as much about healing a nation that had become deeply divided.

At a time when partisanship often felt like sectarian violence, Moore worked to humanize Trump supporters as well as Clinton herself. His message was clear: Without a sense of our common humanity our democracy is doomed.

5. Trump wins, but Moore doesn’t give up.

The morning after the election, when most of us were nursing hangovers and fantasizing about taking a Matrix-inspired red pill, Moore rolled up his sleeves and blasted out a 5-point “to-do” list.

At the top of the list: “Take over the Democratic Party and return it to the people. They have failed us miserably.” He was, as usual, spot on. If we weren’t ready to take over the party, then we had no business complaining about it.

That list, though, was followed by others, all of which combine sharp insight with entertaining wit — and all of which refuse to let us off the hook.

On Dec. 27, he posted on Facebook “5 Things You Can Do Right Now About Donald J. Trump.” While he commiserated with all of us who were still in shock, he insisted that this was not the time to sit back in a daze; it was time for action.

His last point on that list is: “You Should Run for Office.” Anticipating his readers’ incredulity, he closes his call explaining: “You know you can do this. We have no choice. We've left it up to others — yes, Democrats — and they are inept and continual losers. Haven't you had enough?”

On top of his five-point lists, Moore is often blasting Trump on Twitter, refusing to let the blowhard go unchallenged on social media. He also tried to encourage electors to dump Trump. As Matthew Rozsa reported, Moore encouraged electors to stop Trump from getting the required Electoral College votes: “I want my fellow Americans, regardless of if they’re Democrats, Republicans, whatever you are, we have to come together and say, ‘This man cannot be at the helm of this ship.’”