"All those dynamics have changed now that he won’t be the governor of Indiana," one GOP congressman said of Pence 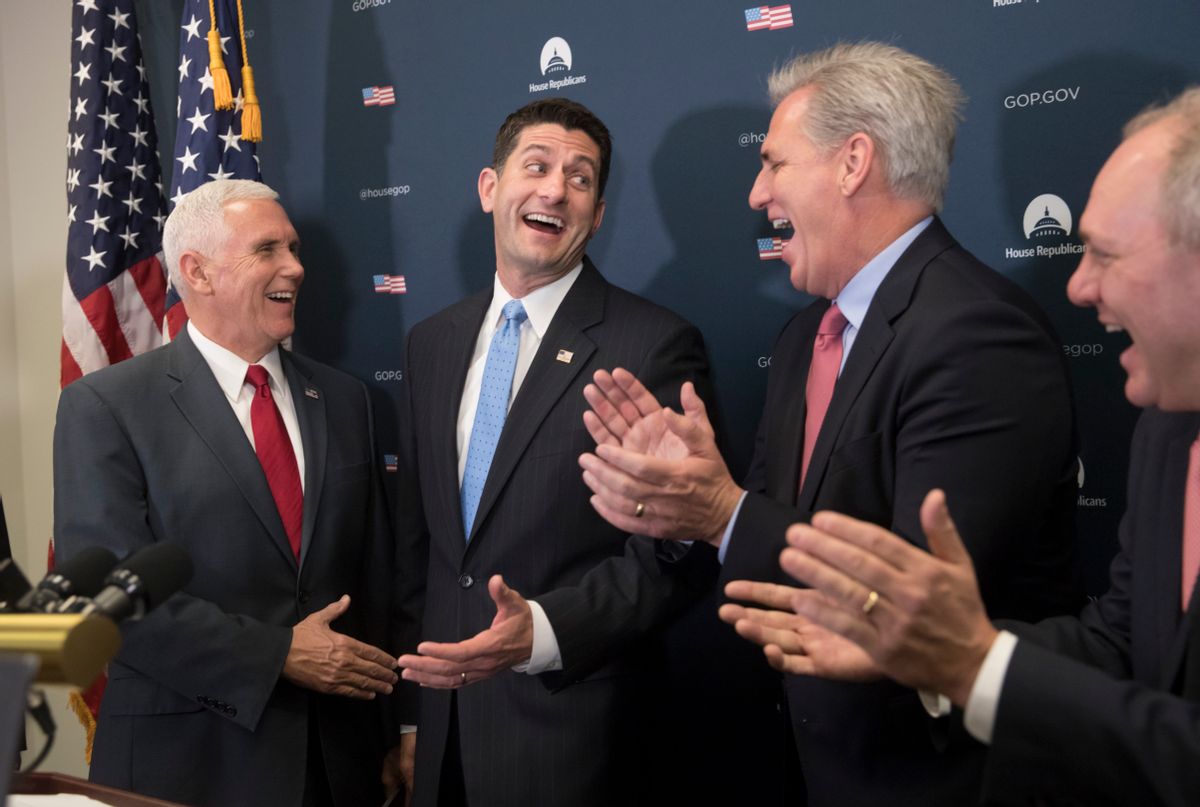 Vice President-elect Mike Pence returned to raucous applause from Republicans at his old stomping grounds on Capitol Hill Wednesday. The former conservative congressman huddled with GOP lawmakers to outline his leadership role in the repeal of Obamacare, but what was left loudly unsaid by Republicans rushing to rejoice Pence's plan is that the Indiana governor actually oversaw the expansion of Medicaid — adamantly opposed by Congressional Republicans — in his own state under Obamacare.

Roll Call's John Bennett reported that "House Republicans on Wednesday cast Vice President-elect Mike Pence as a conservative white knight uniquely qualified to dismantle the 2010 health care law." Several of the GOP lawmakers whom Bennett spoke did not want to discuss, however, Pence's own embrace of the vilified law through the expansion of Medicaid he engineered in Indiana.

“I don’t begrudge any governor doing what he thinks is right for his state,” House GOP deputy whip Tom Cole said when asked about Pence's action on Obamacare.

Months before he was selected to be Donald Trump's running mate, Pence announced that Indiana would finally accept millions of dollars in Obamacare funding to become one of 10 Republican-led states to sign on to Obamacare's expansion of Medicaid. Thirty-one states and the District of Columbia have expanded Medicaid, extending coverage to at least 10 million Americans.

Pence's expansion of Medicaid was blasted by conservatives and Republicans at the time. Pence has since boasted that Indiana has lowered ER visits and has recruited more physicians by paying them more.

But despite Pence's past praise, many of his former colleagues in Congress ignored his actual record on Obamacare to appoint him the leader of their opposition effort against President Obama's signature legislation.

Rep. Chris Collins, a New York Republican and Trump ally, said Pence, a former six-term congressman, would play a "lead role" in crafting a plan that will please insurers and the public and plans to have an office in both the Senate and the House, an unusual move for a vice president.

"Our members know he’s the right person to allay our concerns to the president-elect,” Rep. Cole assured Roll Call.

“He’s exactly the right guy,” Texas Rep. John Culberson insisted. “Mike’s a smart guy, and he’s trusted by the conference. He was our conference leader for a couple of years.”

“Obviously, all those dynamics have changed now that he won’t be the governor of Indiana and he’s the vice president-elect,” he told Bennett.

For his part, Pence wasn't any more interested in discussing his record of embracing Obamacare than the Republicans he met with on the Hill.

"The reality is that I was here in March of 2010 in another capacity when Obamacare was signed into law," Pence told reporter after his meeting Wednesday. "I remember all those promises. We were told that if you like your doctor, you can keep it. Not true."

Pence said at the press conference that erasing the law will be the Trump administration’s top priority.

“The first order of business is to repeal and replace Obamacare,” Pence said. “We need to reverse the damage done.”

The gathered reporters did not ask Pence about how well Medicaid expansion is working in his own state, but Pence repeatedly dodged questions about the specifics of the GOP plan to replace Obamacare.

“We’re working on both a legislative and executive action agenda to ensure that an orderly and smooth transition to a market-based health care reform system is achieved,” Mr. Pence said, without specifying which parts of Obamacare might remain in place.

The vice president-elect's comments came as President Obama also huddled with Democrats on Capitol Hill in a last-ditch effort to save his signature health care law and to not "rescue" Republicans on Pence's repeal effort.