Donald Trump and the hobbling of shame: David Foster Wallace warned us about reality TV and we didn't listen

In 2004, David Foster Wallace said "only time will tell how far we’ll go" in a post-shame culture. Now we know 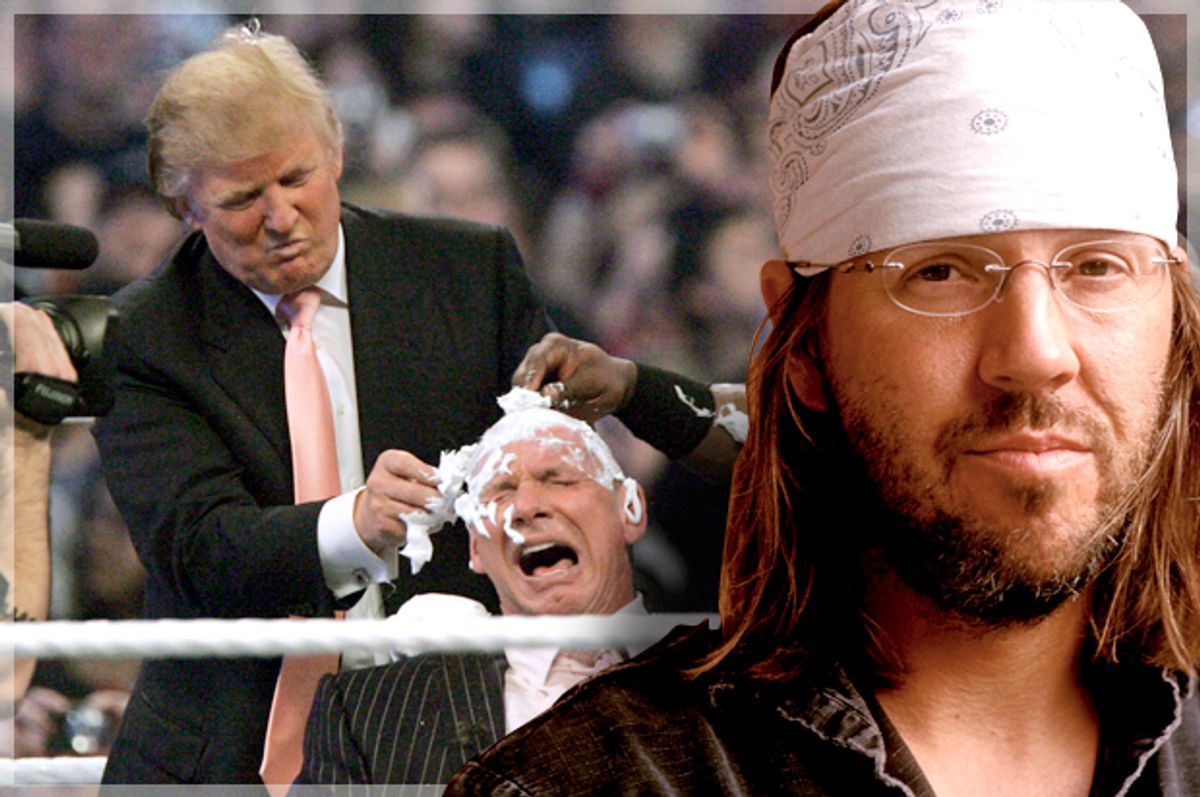 The best preview of the Donald Trump presidency was the orange billionaire rolling around on the ground with Vince McMahon, owner and operator of World Wrestling Entertainment, while thousands of frenzied fans screamed in approval. An underrated development in American life is that the Trump administration will become the first to feature not one, but two members of the WWE Hall of Fame – Linda McMahon, Vince’s wife, as director of the Small Business Administration, and the president himself. Trump’s brief foray in pro wrestling ended with “Stone Cold” Steve Austin performing his finishing maneuver, the “Stone Cold Stunner,” on Trump, rendering him incapacitated in the middle of the ring. If only the political process were so just.

“The allure of both drugs and entertainment,” the late David Foster Wallace once said in an interview, “is escape. I can escape my problems and pretend that I’m James Bond for awhile, which is fine for a short haul. As a way of life, it doesn’t work well.” Much of the late author’s work has, unfortunately, become increasingly relevant, because one of his obsessions was the American addiction to amusement, and the culture’s tendency to reduce everything to entertainment. He wrote an essay on the mutation of human sexuality, most especially women’s lives, into entertainment, while covering the AVN Awards; he chronicled the life of a right wing talk radio host in California as an allegory against the dangers of treating political debate as fodder for amusement; he wrote about the poison of excessive television consumption, admitting he was such an offender that he had to remove all TV sets from his home to get any work done. Wallace’s signature achievement, the postmodern novel "Infinite Jest," is built around a film of the same name, also called “The Entertainment,” that is so entertaining it immediately, and irrevocably, hypnotizes its viewers, rendering them motionless until death.

The popularity of reality television, not nearly as ubiquitous when he died as it is now, worried Wallace. In a 2004 interview with Steve Paulson on "To the Best Of Our Knowledge," he confessed a fear that is now prophetic: “The inhibition of shame on the part of both the contestants and on the part of the people who put together the shows — at some point people have figured out that even if viewers are sneering or talking about in what poor taste stuff is, they’re still watching, and that the key is to get people to watch, and that that’s what’s remunerative. Once we’ve lost that shame hobble, only time will tell how far we’ll go.”

The election of Donald Trump, a vulgar veteran of reality television, to the presidency of the United States is one indication of “how far we’ll go” after collective emancipation from the “shame hobble.”

If there is one feeling that Americans dread, it is boredom. Smart phones, the omnipresence of TV and music, and the convenience of tablet devices all help Americans construct lives of perpetual distraction and amusement. The smartphone, for all of its good, offers the ever-present temptation of the Internet to those with short attention spans. Televisions blast headlines, sports scores and scripted comedy in the checkout lines of grocery stores, in every bar, and even at pumps of some gas stations. The challenge of finding silence in public space illustrates the resistance many Americans have to sustained focus and thought.

Public policy, political rhetoric and the administration of democratic institutions are not subjects of much suspense, humor or excitement. As serious, and often as grave, as political work and public management becomes, it remains vulnerable to the frivolousness of an uninformed, but more importantly, uninterested electorate. Donald Trump is far from responsible for how entertainment values have corrupted the political process. In 2000, according to many media commentators and in the minds of many voters, Al Gore was the boring college professor whose lectures acted as Nyquil, while George W. Bush was the towel-snapping frat boy who everyone on campus wants to “have a beer with.” If only the beer had not ended with an unnecessary war in Iraq, the drowning of New Orleans and the liquidation of middle-class wealth, personality appeal might make sense as a criterion for political evaluation.

There are rare moments when a candidate — like John F. Kennedy or Barack Obama — who is capable of generating enthusiasm with charismatic charm but maintaining discipline and intellectual rigor, emerges victorious in a national election, but those men are exceptions to an absurd rule. The observable trend is that American politics is further at the mercy of an ADD-afflicted, absentminded and superficial public. Donald Trump did not invent the problem, but he has enhanced and taken advantage of it, to use one of his favorite phrases, “like nothing we’ve ever seen before.”

Every day during the Republican primary and the general election, Donald Trump managed to manipulate a deliberation with enormously consequential and potentially fatal results in a perverse combination of pro wrestling, the "Real Housewives" franchise and, as Salon's Amanda Marcotte observes, his own "Apprentice" franchise. The mainstream media was as malleable as uncooked ground beef, and the voters were all too eager to feast.

The more that Trump’s campaign resembled a farce, the more it seemed to appeal to the electorate. Similar to adult fans of professional wrestling, many people who watched Trump, free from the shame hobble, seemed to sense that he was an absurd performance artist, but they liked the show. Trump could “shake up the system,” and he is not the “typical politician.” He is fun to watch. In pro wrestling, most of what viewers see falls under the category of “work” — the scripted, pre-planned events made for broadcast television. Rarely, some unpredictable, spontaneous event will take place, and that is called a “shoot.” Trump brought the appeal and performance of the “work” to the “shoot” of American politics. He had 11 years on reality television to master the art of deception, creating a character much like the heroes of the WWE.

Unimaginative journalists and analysts have grown fond of instructing Americans to “take Trump seriously, but not literally.” That is precisely how admirers of Hulk Hogan, The Rock or John Cena cheer on their preferred gladiator while he pretends to pummel a detestable villain. To take the beating literally would require belief that it is real, but to take it seriously is to view it as only metaphor of entertainment. It is a surreal twist of history, but observers of American politics have all entered the arena of the pro wrestling work.

Twelve years have passed since David Foster Wallace wondered about the ultimate destination of reality and trash television’s influence on the American public. The voters are well-practiced at taking what they see seriously, but not literally, and in the process, losing any interest in in truth, fidelity to facts and appreciation of authenticity. Perhaps many Trump supporters realize that their world heavyweight champion cannot “bring the jobs back” from China, or quickly destroy ISIS, but they cheer for the same reason they might cheer when the good guy body slams the bad guy. It is a skit meant for emotional catharsis. The beloved persona of Trump, through empty gestures, symbolizes the fight they wish they could win. Why, after all, in the style of wrestling fans, do Trump supporters continue to chant “lock her up!” long after Trump has repeatedly stated that he will not pursue prosecution for Hillary Clinton?

The made-for-TV rescue of manufacturing jobs at Carrier Corporation in Indiana sketches the symbiosis between Trump’s persona and politics. In an unapologetic move of crony capitalism, Trump and Vice President-elect Mike Pence, who is still Indiana’s governor, bribed the company with tax breaks, promises of lucrative government contracts and the gift of deregulation to “save” 800 jobs originally scheduled for outsourcing to Mexico. The deal provoked widespread criticism as setting a bad precedent for greedy and savvy CEOs looking to acquire similar treatment for the Trump administration, but it is largely moot. Representatives from Carrier have admitted to the financial press that within a decade, the jobs that Trump heroically resurrected will be automated.

America’s next top president is betting on the short attention span of the voters, and the reckless ratings fiendishness of the media, to provide cover for the vacuity and cruelty of his policies, while he is able to present himself as the same brave and visionary leader who greeted contestants every week in the studio boardroom of "The Apprentice."

The masquerade will most likely end with horrific damage to the nation’s economy, governmental institutions and actual human lives, but it will remain entertaining, and that is part of the problem. It seems reasonable to assume that one of the reasons millions of Americans were attracted to Donald Trump, and tolerated his boorishness and fatuousness throughout the campaign, was that they enjoyed watching him. Hillary Clinton, by contrast, in the words of the Chicago Tribune, Washington Post and a bipartisan parade of pundits, is “boring.”

Boredom needs a champion in American life. Anyone who has passed a civics class will not remember “how a bill becomes a law” as riveting. The Federalist Papers are not exactly beach reading. Politics should bore people, because the work of government is boring. The American people should not look for amusement from their political leaders and process, but understand that even though a campaign is visible on television, it is not a television series. It is a serious moment of reflection on the direction of their country in demand of the unexciting qualities of wisdom, studiousness and discipline. It should take work to determine how to cast a vote.