There's nothing "unusual" about a farewell address — and if history is a guide, it may offer important warnings 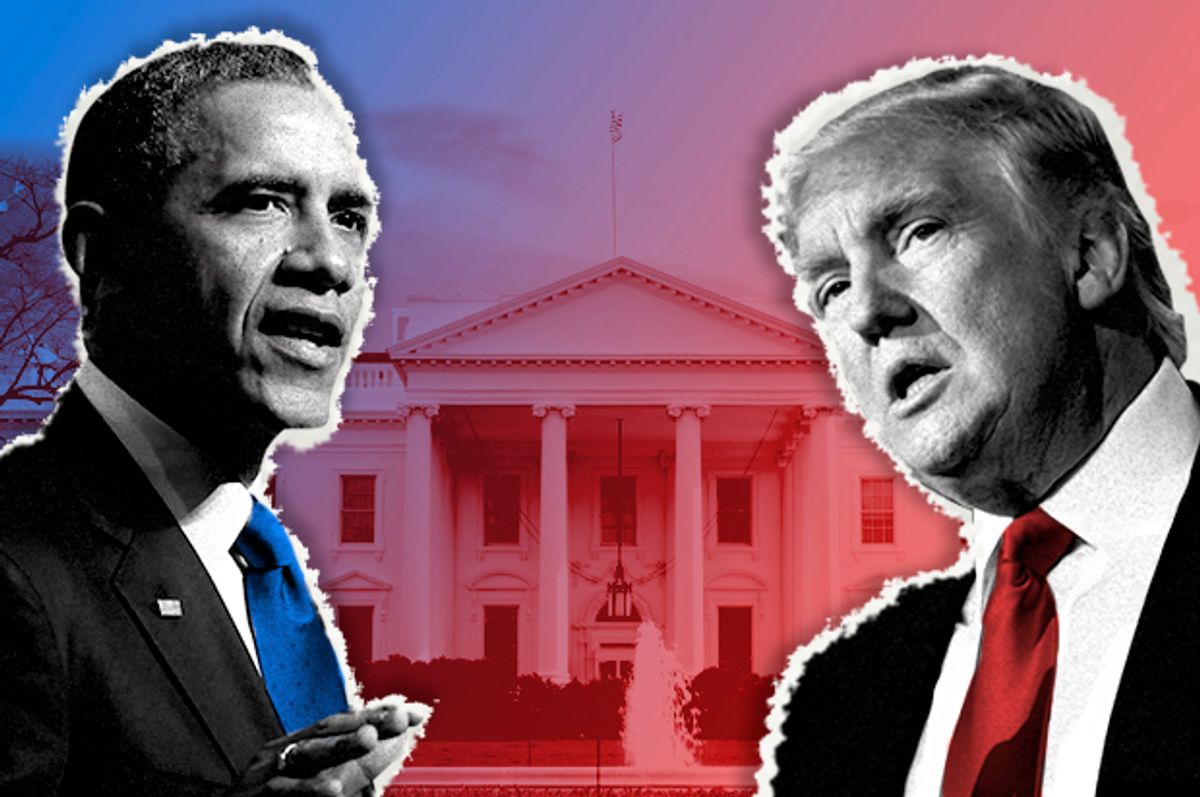 A recent Wall Street Journal article tried to cast Barack Obama's upcoming farewell address as abnormal, calling it “unusual for an outgoing president.” It was an astonishing contortion aimed at normalizing the already extraordinary presidency of Donald Trump. As many commentators have observed, given that George Washington began the tradition of giving a farewell speech, and all presidents since World War II except John F. Kennedy (for obvious reasons) have followed it. Even Richard Nixon, resigning in disgrace, gave two farewell speeches: First his resignation speech, and then his nationally broadcast farewell the next day. It’s perfectly normal for presidents to speak to the nation one last time, before they rejoin the ranks of fellow citizens. Somehow, the Journal doesn’t think so:

Since Election Day, Mr. Obama has taken some of the most far-reaching actions of his eight-year presidency, leaving Mr. Trump to manage the fallout and narrowing his options once he takes office. He also plans a final major address the week before the inauguration that will reflect on his policy agenda, according to people familiar with the speech. The address, unusual for an outgoing president, could contrast his approach with Mr. Trump’s.

Apparently, after all the blowback, the Journal realized it had gone too far. The "unusual" phrase was cut, and an explanation was added after the end of the story, saying that Obama “is considering a farewell that goes beyond the typical addresses in both scope and intensity, people familiar with the discussions said.”

Oh, really?  It’s hard to imagine Obama saying anything that carries more weight against Trump and what he stands for than Dwight Eisenhower offered in his famous farewell address. Just before the most-remembered part where he warned America about the rise of the military-industrial complex, Eisenhower made a more general argument about the need for balance, Crises will continue to occur, he said, bringing with them "a recurring temptation" to take "some spectacular and costly action":

Those were the farewell words of the only previous modern president who had no civilian government experience before being elected. Their message could not be clearer, when it comes to Donald Trump: The central issue is not his lack of experience; it's his lack of balance and sound judgment.

George Washington’s farewell address struck a similar tone, underscoring the benefits of balance and unity across the full range of concerns present at the time. He warned against sectionalism, factionalism and political intrigues with foreign nations. A persistent sub-theme one can’t help but notice, in light of Trump's ascendancy, is the destructive potential of dealmaking at the expense of the balanced whole. Most tellingly, Washington warned of the extremes that partisan factionalism could lead to, in a passage that now reads almost like prophecy:

The alternate domination of one faction over another, sharpened by the spirit of revenge, natural to party dissension, which in different ages and countries has perpetrated the most horrid enormities, is itself a frightful despotism. But this leads at length to a more formal and permanent despotism. The disorders and miseries which result gradually incline the minds of men to seek security and repose in the absolute power of an individual; and sooner or later the chief of some prevailing faction, more able or more fortunate than his competitors, turns this disposition to the purposes of his own elevation, on the ruins of public liberty.

What could Obama say against Trump that would be more cutting than that? Or consider this passage from Washington's speech, in light of Trump’s love of conspiracy theory, gossip, fake news and outright lies:

Promote then, as an object of primary importance, institutions for the general diffusion of knowledge. In proportion as the structure of a government gives force to public opinion, it is essential that public opinion should be enlightened.

Of course, Washington and Eisenhower were sober, un-Trumpian figures, and the passages quoted above make this even more evident. But they aren’t the only presidents to leave office with anti-Trumpian farewell messages.

Trump has made numerous reckless statements about nuclear weapons and nuclear war. Harry Truman, who actually dropped the A-bomb on Japan, did not: “Starting an atomic war is totally unthinkable for rational men," he said.

In foreign relations, Trump is paranoid, protectionist and presents no consistent view. George W. Bush — for all his many flaws — represented a different tradition:

We must continue to engage the world with confidence and clear purpose. In the face of threats from abroad, it can be tempting to seek comfort by turning inward. But we must reject isolationism and its companion, protectionism. Retreating behind our borders would only invite danger.

Trump is like Bush, however, in his willingness to blow giant holes in the budget, with massive tax cuts for the rich and the super-rich. Bill Clinton was not, sounding very much like a pre-Ronald Reagan Republican:

America must maintain our record of fiscal responsibility. Through our last four budgets we've turned record deficits to record surpluses. ... Staying on that course will bring lower interest rates, greater prosperity, and the opportunity to meet our big challenges. If we choose wisely, we can pay down the debt, deal with the retirement of the baby boomers, invest more in our future, and provide tax relief.

Farewell addresses have many different things in them, and contrary to the Journal, it’s not unheard of for outgoing presidents to take veiled potshots at the policy ideas of their successors. What you won't find in any of them is anything that sounds like Donald Trump. Even those presidents who might be considered most similar to Trump provide a striking contrast. First is Andrew Jackson, a man whose intemperance and populist bigotry leads some to cite him as a precedent for Trump. Yet in his farewell address, Jackson took the very un-Trumpian step of acknowledging his own fallibility. “My public life has been a long one, and I can not hope that it has at all times been free from errors,” Jackson said.

Similarly, Ulysses S. Grant's extremely brief farewell address gets right to the point, acknowledging his own lack of "previous political training," and saying, "Under such circumstances it is but reasonable to suppose that errors of judgment must have occurred." It's impossible to imagine Trump acknowledging his flaws to that degree. Both Jackson and Grant were veterans, generals and war heroes, let’s not forget, while Trump was a draft-dodging playboy. So their distinctly different attitudes toward admitting mistakes had profound foundations.

There is, in short, a long history of farewell addresses that would not make Trump look good. So why try to make Obama look bad instead? There was a larger Trump-normalizing narrative at work behind the the Wall Street Journal's story, as first presented in the passage quoted above: Obama was taking “far-reaching actions” to box Trump in, leaving him “to manage the fallout and narrowing his options once he takes office.” What proof of that can the Journal points to? First, the fact that Obama slapped Russia with sanctions in response to its apparent cyberattacks and second, the claim that “Obama broke with decades of U.S. policy and let pass a United Nations resolution condemning Israel for building settlements.”

There’s really nothing unusual about either action. Obama could only sanction Russia after the election, unless he was willing to risk appearing to play politics. As for the U.N. resolution, the Journal's description is a joke, creating an impression exactly opposite to the historical record. As Zaid Jilani notes at the Intercept:

Throughout his entire term, this is the only resolution critical of Israel that the Obama administration allowed to pass at the Security Council.

A more plausible interpretation of Obama’s action is that it was a last-minute Hail Mary, trying to reclaim a modicum of self-respect. It could have implications for others, but given the history Jilani points to, narrowing Trump’s options isn’t one of them.

On a more basic level, the Journal’s entire premise is wrong. America only has one president at a time. Obama himself said as much when he was president-elect, and he was simply echoing those who came before him. If you recognize that, then the Journal’s story collapses: Obama is just doing his job as he sees fit, until the day he leaves office. To further maintain its false pretense, the Journal only recognizes the guiding “one president at a time” principle in a quote from Obama spokesman Sebastian Fischer, effectively demoting it to a partisan, "he said, she said" matter.

Just to underscore how wrong-headed the Journal’s story was, let’s let George W. Bush — rather than Barack Obama — weigh in with a final farewell-address jab at the loser who is about to become president.

President Thomas Jefferson once wrote, "I like the dreams of the future better than the history of the past." As I leave the house he occupied two centuries ago, I share that optimism. America is a young country, full of vitality, constantly growing and renewing itself. And even in the toughest times, we lift our eyes to the broad horizon ahead.