The next wave of trans bathroom bills will be even worse: Inside Virginia’s nightmare anti-LGBT legislation 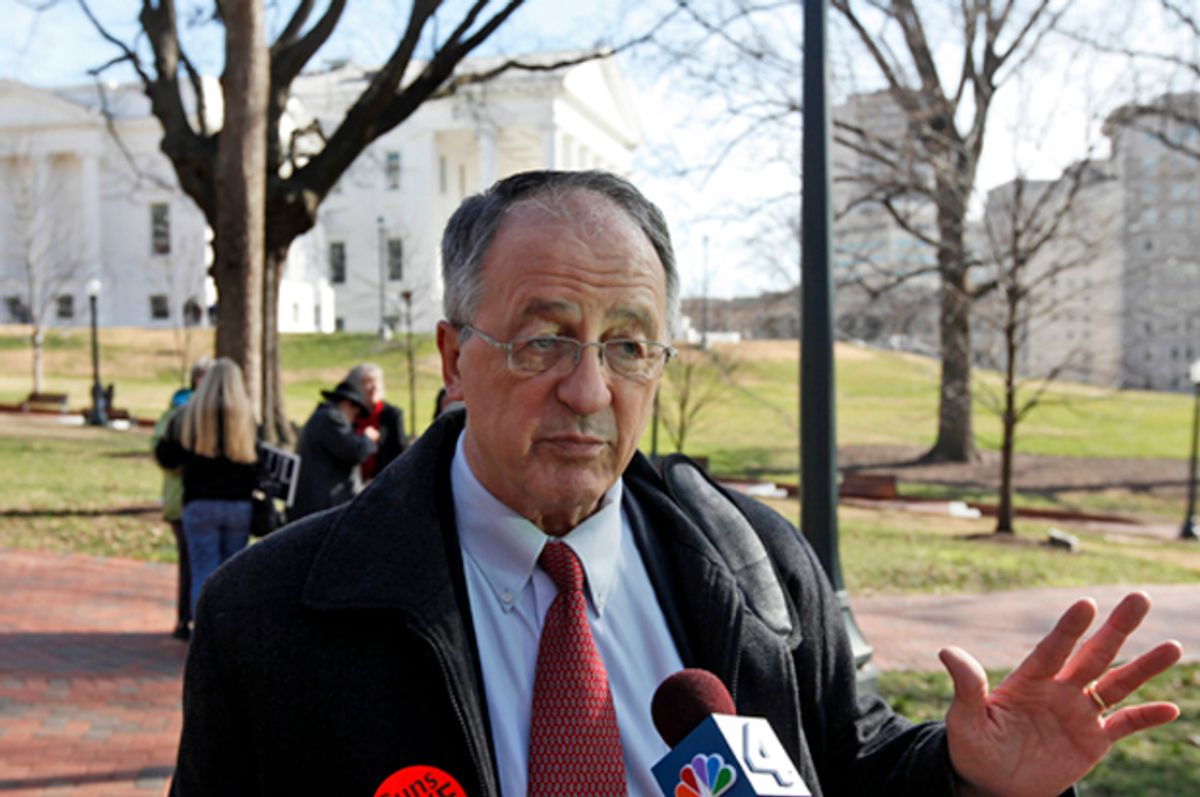 It's the song that never ends. On Wednesday, Virginia introduced an anti-trans bathroom bill that would bring the war over LGBT rights in North Carolina to the Equality State.

Think of House Bill 1612 as like HB 2 on steroids. Known as the “Physical Privacy Act,” the legislation states that “no individual shall enter a restroom or other facility designed for use by members of the opposite sex.” The bill defines sex as the gender marker listed on one’s birth certificate, which is a particular problem for transgender Virginians. Currently, the state does not allow trans people to update their birth certificates to be consistent with their gender identity, although groups like National Center for Transgender Equality and Equality Virginia have lobbied the state to amend those policies.

This bill is extremely similar to North Carolina’s anti-LGBT law in that it effectively forces trans people to use public restrooms that will put them at even greater risk of being harassed or assaulted. Statistics from The Williams Institute, a pro-LGBT think tank at the University of California Los Angeles, show that 70 percent of trans people report being harassed when using a restroom.

But the Physical Privacy Act goes even further than HB 2, a wildly unpopular bill that led to an estimated $5 billion a year in economic losses for North Carolina. Although HB 2 lacks any sort of enforcement mechanism, HB 1612 allows private citizens to take action against the government if they feel their “privacy” has been violated. That means that if a transgender person uses a public restroom that does not match their birth certificate and another person is in the facility with them, that individual can sue the state of Virginia for civil damages on the basis of emotional distress.

The legislation, which was introduced by Republican delegate Bob Marshall, would also force educators to out a transgender student to their parents should the student “requests to be recognized or treated as the opposite sex, to use a name or pronoun inconsistent with the child's sex, or to use a restroom or other facility designated for the opposite sex.” Given that 41 percent of homeless youth identify as LGBT, this policy could have a devastating impact on the trans community.

Marshall, though, doesn’t believe that the law is harmful in nature. “Some guys will use anything to make a move on some teenage girls or women,” he told The Washington Post. “Mere separation of the sexes should not be considered discrimination.”

He’s wrong. What makes HB 1612 particularly pernicious is that the legislation is actually an unholy hybrid of different anti-trans bills across the U.S., combining the worst elements of other states’ proposed laws. If the American Civil Liberties Union warned that state legislatures are likely to introduce more anti-LGBT bills than ever, the Physical Privacy Act is proof that hate isn’t just proliferating in local governments; it’s getting more extreme.

Marshall, who has also proposed the passage of a law that would declare pornography an “epidemic that is harming the people of the commonwealth and the nation,” lifted much of HB 1612 from Texas. The Lone Star state is considering a law introduced by Republican Rep. Konni Burton that would similarly compel K-12 faculty and staff to disclose students’ sexuality to their parents. Lt. Gov. Dan Patrick is also enthusiastically pushing the state’s own anti-trans bathroom bill, which the politician has claimed is a “top priority” for 2017. That bill, called the “Texas Privacy Act,” was unveiled Thursday.

The Texas Association of Business strongly opposes the anti-LGBT legislation, saying that it could cost the state between $964 million to $8.5 billion in boycotts from major businesses. After the passage of HB 2 last March, more than 200 companies condemned the bill, including Apple, Microsoft and Google, while PayPal and Deutsche Bank pulled planned expansions to North Carolina in protest.

Patrick will likely be undeterred by economic backlash. When the General Assembly met in December to consider the repeal of HB 2, the Republican begged the legislature to keep the law in place, despite the fact that two-thirds of voters believe it has harmed the state.

The very same day that Texas Privacy Act was announced, a Kentucky lawmaker, Rep. Rick Nelson, reintroduced two pieces of legislation targeting the LGBT community. One is yet another bathroom bill but the other is similar to the First Amendment Defense Act, a “religious freedom” law that will be debated by Congress this year. Aimed at protecting “a person's right of conscience,” it would allow businesses to deny services to individuals based on their sexual orientation or gender identity. The latter, known as House Bill 105, is similar to laws proposed in years past, but until this week, the state’s House was controlled by Democrats.

Terry McAuliffe, the governor of Virginia, has already come out against HB 1612. In a press release, his spokesperson, Brian Coy, said that the Democrat would veto the legislation. The governor of Kentucky, Matt Bevin, has also claimed that laws regulating where transgender people go to the restroom are not necessary — because they address a problem the state doesn’t have.

But in pushing discrimination even further than years past, state legislatures have been very busy in the new year. The National Conference of State Legislatures reports that Alabama, South Carolina, Missouri and Washington have already proposed their own anti-LGBT laws for the 2017 legislative session.

The latter bill, known as House Bill 1011, would delineate restroom use based on genitalia. The legislation states that businesses and individuals are permitted to “[limit] access to a private facility segregated by gender, such as a bathroom, restroom, toilet, shower, locker room, or sauna, to a person if the person is preoperative, nonoperative, or otherwise has genitalia of a different gender from that for which the facility is segregated.” Sponsored by 14 Republican state representatives, HB 1011 does not detail exactly how the government would go about enforcing such regulation.

HB 2 should have been a cautionary tale, a reminder of the costs of singling out marginalized communities for discrimination. But in a conference call with reporters on Wednesday, Cathryn Oakley, the Senior Legislative Counsel for the Human Rights Campaign, warned that the bill could be an “example” for other states, especially given the incoming administration’s apparent support for such legislation.

Donald Trump, who was against HB 2 before coming out in favor of it, will be reportedly hiring former North Carolina Gov. Pat McCrory, who repeatedly defended the anti-LGBT bill at the expense of his election hopes. McCrory, who endorsed Trump, appeared at numerous rallies with the president-elect. The billionaire also endorses the First Amendment Defense Act on his website, while his vice president, Mike Pence, was in charge of passing an Indiana law in 2015 that’s a virtual clone of that legislation.

Virginia’s anti-LGBT bill may not survive the governor’s pen, but that doesn’t mean that the legislation — and more like it — can’t do a great deal of damage along the way.