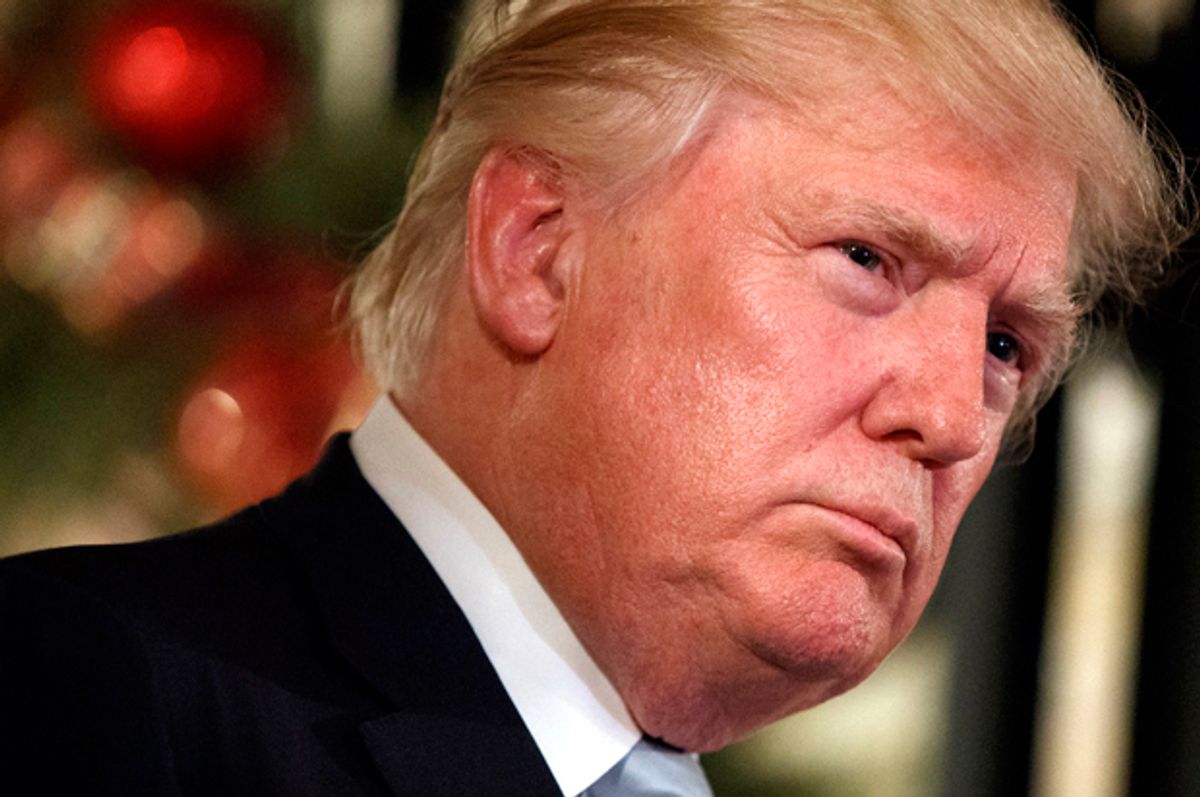 Back in December 2015, when Donald Trump was still considered that year's GOP gadfly, I wrote a piece for Salon headlined "Donald Trump’s got Putin fever: The GOP frontrunner is stumping for a Russian strongman." At the time, Trump was bragging about his "great relationship" with Vladimir Putin, with whom he said he had appeared on "60 Minutes."

It turned out that the CBS News program had simply aired separate segments about the two men on the same broadcast, but Trump claimed the show's great ratings proved there was something special about the combination. When Putin later called Trump "bright and talented," the Donald was giddy with delight, saying, "It is always a great honor to be so nicely complimented by a man so highly respected within his own country and beyond."

Trump seemed to believe that because the Russian leader disliked President Barack Obama, Putin and Trump would get along. Evidently, it was an "enemy of my enemy" thing, which is an unusual position for a U.S. presidential candidate to take. Normally, even if an opposition candidate has serious disagreements with a rival on foreign policy matters, he or she wouldn't publicly side with a foreign leader. But that's Trump, breaking every rule and norm without even knowing — or caring — that they ever existed.

At the time, this didn't surprise me too much. I knew that Trump was wired into the right-wing fever swamp through friends like Roger Stone, and later learned that he had enlisted his aide at the time, Sam Nunberg, to listen to hours and hours of conservative talk radio and give him reports on what that audience was most interested in. And one of the odd little sidebars of the past few years in the talk-radio world was a serious man crush on Vladimir Putin.

As I mentioned in my 2015 piece, Marin Cogan's article in National Journal on the emerging Putinphilia showed that the right was just hungry for a real man:

Earlier this year, when Putin supposedly caught — and kissed — a 46-pound pike fish, posters on Free Republic, a major grassroots message board for the Right, were overwhelmingly pro-Putin. "I wonder what photoup of his vacation will the Usurper show us? Maybe clipping his fingernails I suppose or maybe hanging some curtains. Yep manly. I can't believe I'm siding with Putin," one wrote. "I have President envy," another said. "Better than our metrosexual president," said a third. One riffed that a Putin-Sarah Palin ticket would lead to a more moral United States.

As David Weigel in Slate has pointed out, some of the the right's big thinkers, like Christopher Caldwell, were less ebullient in their admiration, dismissing Putin's corruption and retribution against political opponents as the price of doing business. Still, they found his anti-gay policies and jailing of upstarts like the "sacrilegious" members of Pussy Riot to be refreshingly assertive. Victor David Hansen in National Review synthesized the right's view perfectly:

Bare-chested Putin gallops his horses, poses with his tigers, and shoots his guns — what Obama dismisses as “tough-guy schtick.” Perhaps. But Putin is almost saying, “You have ten times the wealth and military power that I have, but I can neutralize you by my demonic personality alone.” Barack Obama, in his increasingly metrosexual golf get-ups and his prissy poses on the nation’s tony golf courses, wants to stay cool while playing a leisure sport. It reminds us of Stafford Cripps being played by Stalin during World War II. “Make no mistake about it” and “Let me be perfectly clear” lose every time. Obama’s subordinates violate the law by going after the communications of a Fox reporter’s parents; Putin himself threatens to cut off the testicles of a rude journalist.

This view of Obama as a "prissy" metrosexual compared to Putin is widely held. And it seems that social conservatism in the hands of a macho authoritarian is intoxicating to these folks.

Although the right protested Putin's handling of the second Chechen War and war crimes against his own people a decade and a half ago, Trump and his followers seem to be impressed today with Russia's deploying similar tactics in Syria. Mark Galeotti in Foreign Policy wrote, "These are very different wars, fought in different ways by different forces, but they nonetheless highlight one central aspect of Putin’s approach to fighting insurgents: the value of brutality."

It's doubtful whether Donald Trump has ever heard of Chechnya, but he has made it clear that he too values brutality. Among his most notorious statements on the campaign trail was the following:

Would I approve waterboarding? You bet your ass I would. In a heartbeat. I would approve more than that. It works. And if it doesn’t work, they deserve it anyway for what they do to us.

The New York Times interviewed some Trump voters this past weekend about the reports of Russian involvement in the campaign and many seemed sanguine about this type of activity. Most of them saw the intelligence report as a matter of Democrats being sore losers and ginning up the scandal for political purposes. One of these voters even said that if it took help from the Russians for Trump to win, he's glad they did it.

It is unknown how many of these Trump voters know the specifics of Putin's leadership. But adulation for the macho Putin in comparison to the allegedly effeminate Obama has been percolating through the right-wing media for several years. There's every reason to believe that Trump understood this as well. It's not that he stole Putin's act. Trump is no different today than he was 30 years ago. It's that he recognizes, probably on an intuitive level, that both of them are cut from the same cloth. The fact that the right was so attracted to the Russian leader may simply have served as Trump's signal that his time had come.