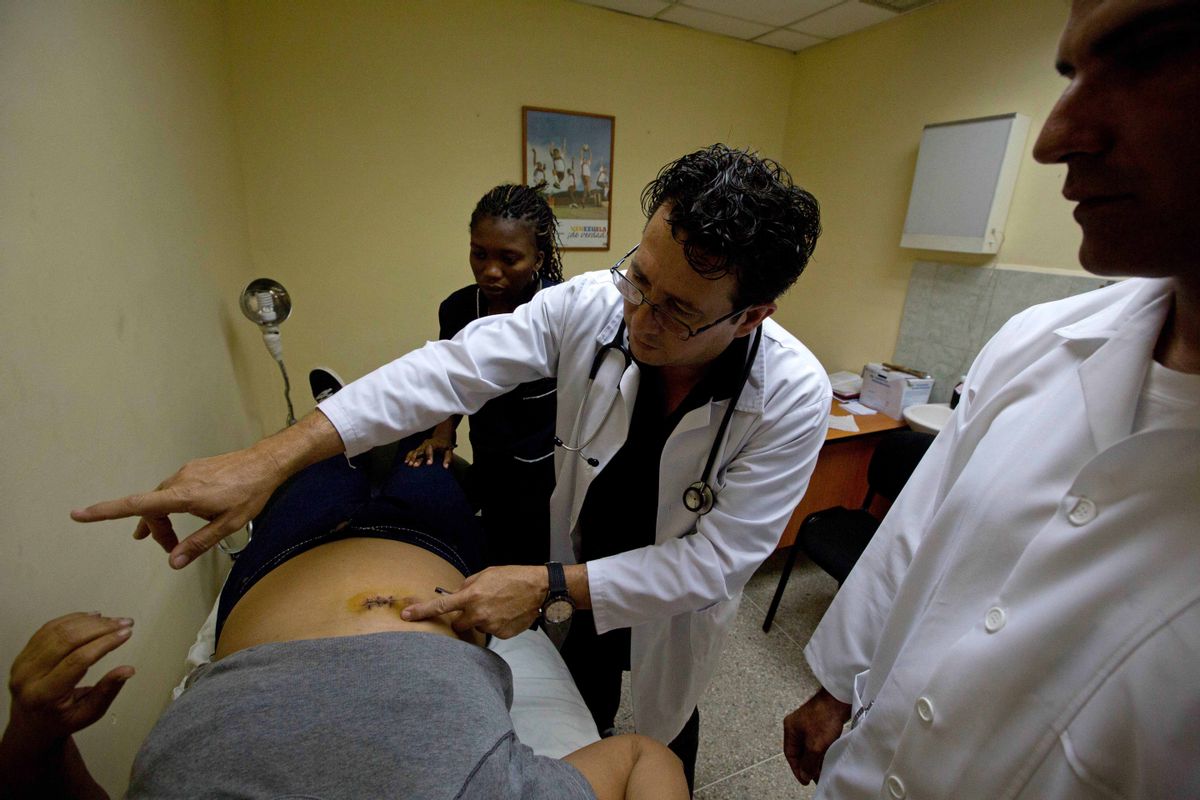 Many people will never hear about how at the end of 2016, 38 medical professionals from Cuba’s Henry Reeve Brigade returned home after more than two tireless months of treating Haitians. They were sent to lend support to Cuba’s permanent medical teams in Haiti in the wake of Hurricane Matthew.

Following the death of 90-year-old revolutionary Fidel Castro on Nov. 25, 2016 corporate media has been fixated on depicting Fidel as the mastermind of a two-dimensional “dictatorial regime.” For those with a three-dimensional perspective, however, Fidel Castro's death provides an opportunity to celebrate victories from the 56 years of the Cuban Revolution for which many people around the world are profoundly grateful and even owe their lives.

Reports from Haiti, Chernobyl, West Africa and many other places recount the extraordinary contributions of what some call Cuba’s “medical internationalism.” In 2014 there were 50,000 Cuban doctors and nurses working in 60 developing countries, according to the research of Canadian author John Kirk published in his book “Cuban medical internationalism has saved millions of lives.” But this unparalleled solidarity has barely registered in the western media.

“Good God, Cuba has done so much for Haiti!” said Ivon Rebelisa, a 46-year-old Haitian from Semillera, Artibonite department working on a farm as a day laborer in the Dominican Republic. “Several of my neighbors were treated successfully for cholera in [the city of] Gonaive by Cuban doctors. Others who didn’t make it to the Cuban clinic in time, my cousin and his wife, both died. The Cubans taught us how to avoid contagion, about frequently washing our hands, boiling or treating water, about not eating street food that had not been reheated enough.”

In 1999 Cuba founded the Latin American Medical School (ELAM) and offered 10,000 scholarships to students “in countries where Cuban medical teams were assisting the local health systems…. The idea behind the ELAM is for graduates to eventually replace the Cuban doctors in their countries,” according to MEDICC, a non-profit which promotes Cuba’s public health program.

The ELAM currently has 19,550 students from 110 countries, making it one of the largest medical schools in the world. All students receive a full scholarship. The ELAM includes the US in its outreach, among youth aspiring to become doctors from the ranks of the “global south” within the north. More than 100 US students have attended the ELAM for free, in exchange for a non-binding promise to serve low-income communities for two years upon their return.

Cuban doctors and graduates of ELAM are known for their emphasis on field experience and preventative medical practices. Fifth-year Haitian student Stephanie Voyard told Cuba Health Reports she likes the Cuban method of teaching. “From the first year, we have a class on community medicine to help us get to know the population, where we learn alongside family doctors. In the second year we work with doctors in polyclinics and from the third year on, in hospitals. Before we get our diplomas, we’ve already learned from experience.”

Due to Haiti’s notable impoverishment, low health indices, inadequate medical services, and proximity, Cuba began sending medical personnel to Haiti in 1998. According to a presentation following the catastrophic earthquake in January, 2010 at a conference hosted by the University of California’s Washington Center, 6,000 Cuban medical staff have treated over three million Haitians. Some 400 Cuban doctors had served consistently in Haiti since 1998. Conference presenter Cuban Ambassador Jorge Bolaños said: “In the first 72 hours after the quake, Cuban medical personnel were among the first responders. …The Cubans have treated many more patients than any other foreign medical team.”

In fact, the Cuban medical team in six months post-earthquake provided more than 341,000 patient consultations, 8,700 surgeries, 111,000 vaccinations, and many other forms of care to hundreds of thousands. In addition, according to Gail Reed, international director of MEDICC, approximately 550 Haitians have graduated from ELAM and nearly 300 of Haiti’s doctors present in the country at the time of the earthquake were trained on full scholarships in Cuba, another side of Cuba’s medical internationalism.

Ten months after the devastating 2010 earthquake, Cuban doctors in Mirebalais, Central Plateau department first identified the arrival of cholera into Haiti. In the 13 months following the outbreak, the Cuban mission in Mirebalais had treated more than 76,000 cholera cases, with just 272 fatalities. Over the 6 years since the outbreak Cuban doctors across Haiti have treated an estimated 40% of the 1 million cases registered. The official death toll is now nearing 10,000, a figure rising quickly due to the uptick in cholera cases following the devastation of hurricane Matthew and the floods that followed.

The cause of the cholera epidemic turned out to be the reckless contaminating of the Artibonite River by untreated sewage from a barracks of Nepalese soldiers deployed to Haiti as part of the United Nations “stabilization force”  (called MINUSTAH by its acronym). These were the first documented cases of cholera in Haiti’s history. The Cuban government immediately sent additional doctors and medical personnel to Haiti to try to stem the tide of the epidemic, with an emphasis on education and prevention through water purification. Recently, after years of denial of legal accountability, the U.N. has finally admitted its responsibility for introducing cholera into Haiti, and is under pressure from Haitian and international social movements to pay reparations.

The expanse of Cuba’s medical interventionism in international health crises is unparalleled among nations, as is their care provided for medically underserved nations. The generous Cuban offer announced by Fidel Castro in 2005 to send a large brigade of Cuban health professionals to New Orleans following Hurricane Katrina had a short media shelf life. The Henry Reeves Brigade—the same brigade that just returned from Haiti on December 19th—was named after the Brooklyn-born internationalist who fought in the Cuban revolution. The brigade consisted of 1,500 Cuban health professionals trained in disaster medicine and infectious disease containment. Built on 40 years of medical aid experience, the volunteer team was outfitted with essential medicines and equipment. (The offer was rejected by the Bush administration).

It was the Henry Reeve brigade that was later deployed in Haiti following the earthquake and in October 2014, itwas the largest medical team on the ground in West Africa battling Ebola. Cuba sent 146 specially trained doctors and nurses to the impacted West African countries, the largest international contingent to risk their people in the deadly center of the epidemic. Cuba held a major international conference in October 2014 on preventing an Ebola outbreak in the Americas, attended by 32 countries including the U.S. Another extraordinary achievement was Cuba’s treatment of 21,874 radiation victims of the Chernobyl, Ukraine nuclear disaster in the 1990s.

While corporate media has ignored stories of Cuban medical internationalism championed by Fidel Castro, much of the world recognizes that Cuba´s achievement transcends geopolitics altogether. It demonstrates what can be achieved when a very high value is placed on human life, every human life. With Fidel now gone, will humanity strive to follow the example the Cuban revolution has so courageously shown?