Notes from a trailing spouse: An expat plots a life well-lived in a barren principality

Cover your computer's camera, careful what you say in emails and, whatever you do, don't drink or swear in public 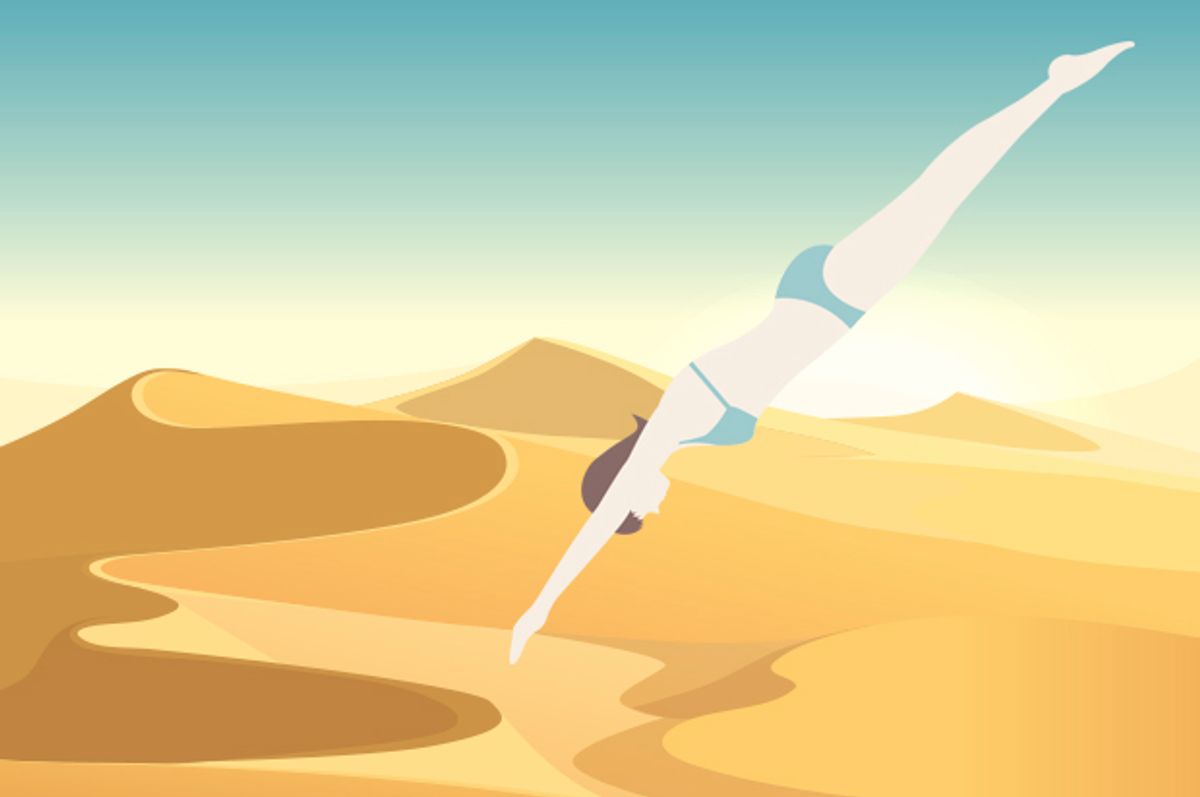 One night recently I found myself in a newly rigged Kon-tiki themed hotel bar seated next to a man with a huge stogie in his mouth. In front of him was his own bottle of scotch and an ice bucket. Eventually,  I turned my attention from the man to the crowd noting that his smoke was merely a top note to the cigarette-stoked miasma that engulfed us all. The women, I saw, were corseted and heavily made-up. On stage was a four piece band, the two female singers in sky high heels swayed gently while cooing standards. I was just drunk enough to believe that the man, metronomically pouring measure after measure of his Johnny Walker Black all while barely disturbing the cigar rooted between his teeth, as well as all our other fellow patrons, were emblematic of a time. Unfortunately, it was not the time we should be in. That night, and many, many days and nights here in Abu Dhabi, the capital of the United Arab Emirates, I have found myself believing I’ve somehow landed back in the 1950’s.

I noticed this time warp almost as soon as we landed here for my husband’s job, which will have to remain a secret, but no, he’s not a spy or an oilman.

We moved into a complex, a collection of buildings and gardens that aspire to be desert castles. Surrounding us are villas that are large enough to house families of twenty or more. Just saying the word complex is, well, for a transplanted New Yorker, pretty complex. It evokes that post war impulse, White Flight. Head to the suburbs!

Looking down from my balcony at all these new homes, many still unoccupied, that aerial photo of  a newly built Levittown (but on steroids) springs to mind.  Homes stamped out, none looking like messy humans lives could be lived in them, no burnt toast, or marital spats, or kids picking their noses. And no sex — a subject I’ll get to in a minute. In other words, it’s all too new. There’s no dirt, though being in the desert, there’s plenty of sand.

Within days, I started to meet other women around the complex where we live whose husbands had also come here for work.  The terrible truth, we soon discovered, was that we all had given up something; jobs, careers, friends, so that, for a few years at least, we could be the benefactors of ridiculously generous pay packets and the supposed ease of an ex-pat life.

But there we were, bobbing around the pool, scared out of our wits. It turns out as modern women we are not built, conditioned, schooled, or even have a vague a priori sense of what it means to be known not only as a housewife, but a trailing spouse. Treading water (yes, metaphor realized) we all admit to feeling throughout the day real anxiety that we might get sucked down into this fake reality made, by sheer attrition, into women we wouldn’t recognize.

I wasn’t born in the 1950’s although I was gestating through its final year. I have, however, been long aware of its claim to a false nostalgia, the sweet decade wedged between the ravages of war and the anarchy of the 60’s. I’ve never been a big fan of nostalgia of any kind (Which is why Make America Great Again seems more of a threat than a promise) and the 1950’s especially always seemed kind of creepy to me.

Huge families, idiotic T.V. shows, pointy bras, housewives (this was before I officially became one) and constraint. That’s what freaks me out the most; constraint. No matter what, if you were a secret commie, gay, liked to dance naked, whether you hated Howdy Doody, or were utterly, god forbid, godless, there were enormous social pressures to keep your predilections, passions, and propensities under wraps. Why? Because while you were hula-hooping and Bobby Socking the “Powers That Be” strove to keep you in check because it was assumed that that was the best bulwark against the very real terrors out there.

That distant world is now my sudden present. And in truth a lot of it is understandable. The fact is this country is a happy bubble, a mere dot on a map of strife. While we aren’t suffering through drills which has us diving under desks, you can’t help but be aware that only a few hundred kilometers away is sectarian slaughter and a whole agenda that would like to see the likes of me wiped off the earth.

Why the 50’s?  Well, I think there are a number of reasons. One, you have to start somewhere. This country is only 45 years old after all. When you whip up a city out of air, in a place, that, let’s face it, is not a natural spot to plunk down high-rises and two and a half million people, you sort of have to make everything up as you go along. Add into the mix are the Emiratis who are naturally conservative, although a lot more progressive than Saudi Arabians. Women can drive, vote, look furiously angry at the husbands in public, or rather sound angry because if the woman is wearing a niqab which covers her nose and mouth, you really only have the tone of her voice and the stricken look of her husband to go on. Even with this, the more liberal social mores we take for granted are frowned upon by the citizens and leaders alike, much akin to the straitened world view that held sway back in the 1950’s.

All this can lead to some very bizarre behavior. Take being in a cab, which you are a lot because they are dead cheap and there’s zero tolerance for drinking and driving. Caught, there's no questions asked, three months in jail, and then you are booted out.

So, cabs. Small coupes, no dividers, no privacy. Which, since you don’t want to offend your Muslim driver, forces one to resort to a strange coded language. The other day, for instance, feeling a little peaked I wanted to tell my husband we needed to stop for a beer. “I’m a bit  H O dearest. Do you think we can get a frothy top drink before we go shopping?” This not mentioning alcohol beggars belief. Recipes in magazines can call for non-alcoholic wine but restaurants advertising their wine list have to call it, red, white or pink grape drink.

Trying not to swear in public is killing me but I daren’t relax my efforts because the ladies of the pool have also made me damn paranoid. You must cover the camera on your computer, they urge, and for god’s sake be careful what you say in your emails, and, don’t for one second think you’re not being watched. This pervasive paranoia is much akin I would imagine to the pervasive paranoia created by Senator Joe McCarthy and his witch hunt for communists, not to mention J Edgar Hoover and his manic need for files on just about everybody!

I like to think I’m a sophisticated enough person to roll with the punches and be respectful in any culture. But when your own people seem lost in a time warp, that’s something else altogether. The day I stop asking where the hell am I, is the day I’ll know that I too  have slipped through the portal.