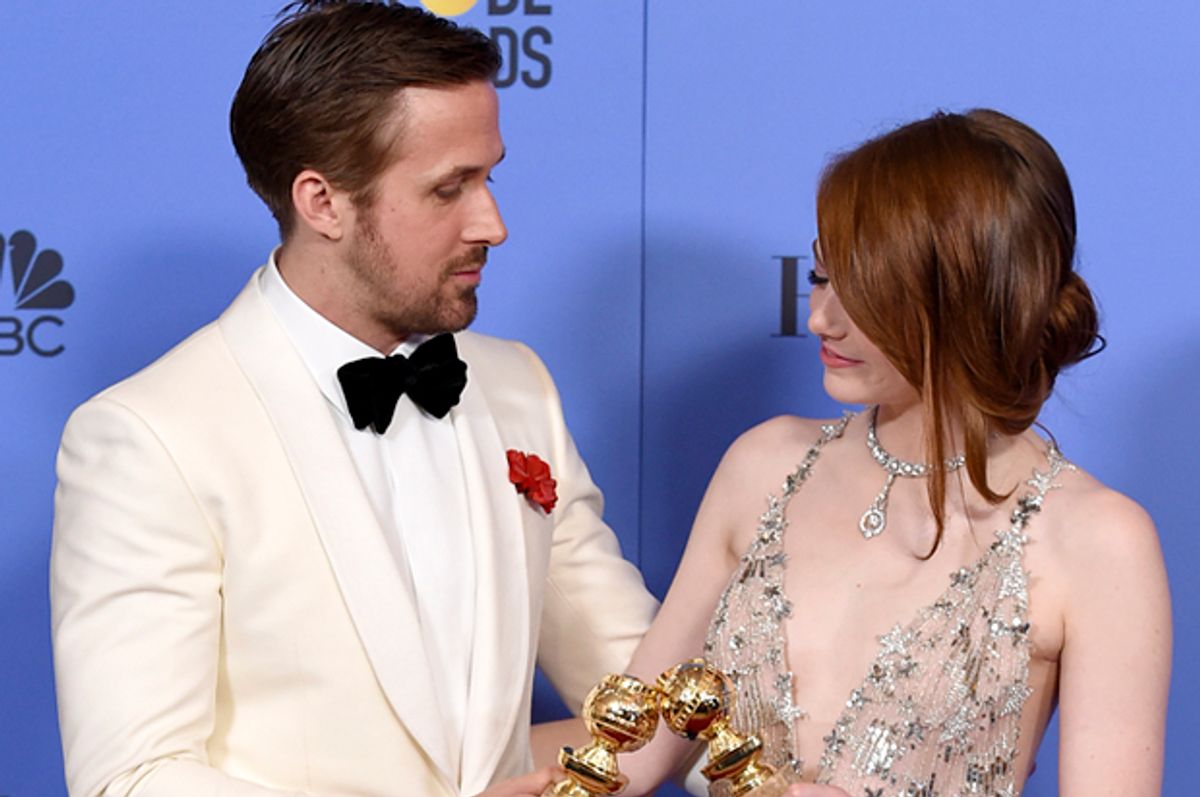 Well. Huh. How to put this? We were wrong. It’s public record, so we might as well fess up. We predicted a whole evening of what could cause outrage at the Golden Globe Awards, and none of it transpired. Casey Affleck did not roll his eyes. Jimmy Fallon danced, yes (half a point?), but he did not pantomime building a wall to a remix of George Cohan’s “Over There.” And the awards were not unanimously given out to white people, nor was one given to Mel Gibson — who, by the way, was forced to grimace through some hot shots at conservatives and the president-elect.

So, a jolly, outrage-free Golden Globes it must have been. Er, not quite.

“La La Land” emerged from the Globes with a literal win (seven of them actually) but a figurative loss. Despite sweeping its nominated categories and setting a record for Golden Globe victories, “La La Land” became the new pop culture heel (you read that right: a musical, the heel).

Let’s rewind a bit: “La La Land” is Damien Chazelle’s sunny musical movie that stars Emma Stone and Ryan Gosling as Los Angeles-dwelling aspirants. Stone’s character dreams of becoming an actress, Gosling’s wants to be a jazz pianist and club owner. The film's original sin is its heavily white cast. It hasn't helped that its ideas about jazz music are quaint, its characters operate from positions of privilege and that it became feverishly popular. If the film’s goal was to curry culture-consumed internet circles’ favor, momentum was not with “La La Land” heading into the Globes and a sweep would certainly spell doom.

But a sweep it would be. And so, with each additional acceptance speech, the cast and crew made themselves more susceptible to backlash. The last two speeches in particular, given by Emma Stone and producer Fred Berger, caused the greatest stir. Each framed the film’s conception narrative as an against-all-odds underdog story.

Accepting the award for Best Actress — Musical or Comedy, Stone said, Thank you "to Lionsgate and our producers for taking a chance on this guy Damien Chazelle, saying he wanted to make a modern original musical. That was sort of a crazy notion.” Later, accepting the award for Best Picture – Musical or Comedy, Berger said, “When we started making this movie, the idea of making an original L.A.-set musical was an utter fantasy. So to be standing here is more surreal than I could possibly describe.”

For some observers, the narrative that getting “La La Land” made was an unlikely triumph was simply confounding. For others, the notion fed into the film’s perturbing naïveté and felt like a contemptible sort of chest thumping. A few people who hadn’t seen the film even decided that they were now opposed to it.

It is perfectly valid, of course, to dislike “La La Land,” to think it did not deserve the awards received and consider the filmmakers' overinflating its importance distasteful. It also seems a bit paradoxical, however, to tune into a show built around awarding the rich and famous and bemoan (what!) the use of  stage time to reflect on the ardor of the journey. The makers of “La La Land” earnestly fed into the superficiality of a superficial show. And that likely will for some reason be unforgivable.

Now, it’s conceivable that “La La Land” will possess its setting’s propensity for weathering storms quickly. It seems much more likely, however, that the 2017 Golden Globes will be for “La La Land” some version of what the 2014 Grammy’s were for Macklemore: a win, followed by a tone-deaf moment and short-lived but long-lasting vilification. As with Macklemore’s Grammy-winning album “The Heist,” “La La Land” is a film that’s intentions were not nefarious, onto which we’re mapping foreign grievances.

But, of course, we’ve been wrong about these things before.