Life and death of Tilikum: "Notorious" orca's death yet another cry for help for captive killer whales

A former SeaWorld trainer says Tilikum, branded as a killer after causing 3 deaths, was warped by his environment 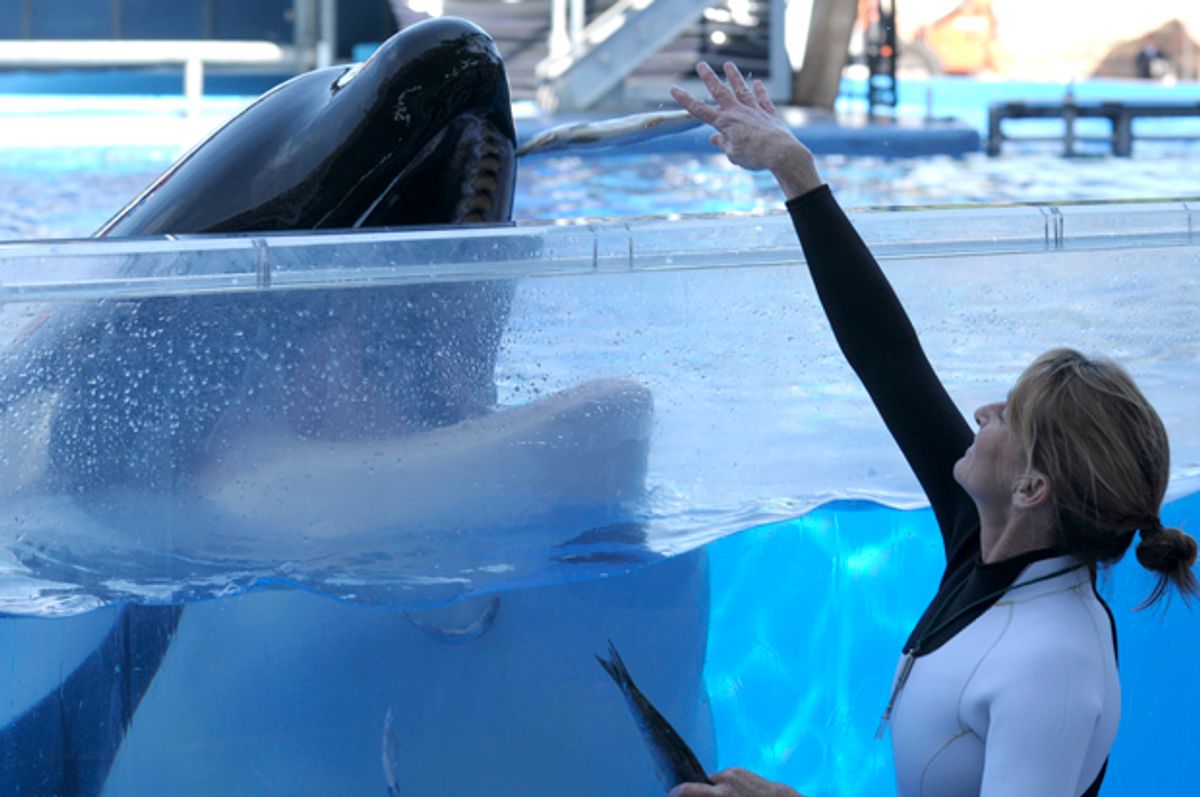 Tilikum, the orca that passed away Friday morning at SeaWorld of Florida from a chronic lung infection, died as tragically as he lived. A magnificent and intelligent apex predator, he had evolved into a tortured animal, entirely because of his captivity.

Sealand of the Pacific captured Tilikum off the coast of Iceland on Nov. 9, 1983, taking him away from his family when he was only 2 years old. He was transported to SeaWorld of Florida in January 1992.

Tilikum, as remembered by the trainers who worked with him at Sealand, was a gentle and motivated whale with a tremendous personality. He was often brutally raked by the dominant females he was confined with, neither of whom was his mother. Sadly, this is the norm for male whales in captivity .

As he lived his very predictable life in his sterile confinement, his personality changed. He grew erratic and dangerous.

Dawn Brancheau was actually the third person Tilikum killed. His first attack and fatality was on trainer Keltie Byrne at Sealand in 1991. She slipped and partially fell into the holding pen and was in the process of pulling herself out of the water when Tilikum grabbed her and dragged her under. All attempts to save her were in vain. Even after her death, Tilikum swam around the enclosure emitting vocalizations with her naked body draped across his pectoral flipper for about two and a half hours. That park shut down, and Tilikum was sold to SeaWorld in 1992 after it assured the National Marine Fisheries Service that the Sealand incident was unique to the other park due to “poor pool design” and would not have happened at SeaWorld.

Tilikum’s second victim was Daniel Dukes, a park guest at SeaWorld of Florida in the summer of 1999. SeaWorld has stood by its statement that staff believed Dukes succumbed to hypothermia and drowned. The autopsy revealed that Tilikum had stripped Dukes of his swimsuit and bit off his genitals. Dukes also suffered contusions and abrasions to his body, forehead and face, and had multiple bites marks on his lower extremities. Tilikum refused for hours to give up his naked body, draped across his back.

Tilikum may appear to have been a monster, but he was really a victim of cruel exploitation, kept in captivity for entertainment and profit — disguised as education and conservation — with his confinement justified through his status as an “ambassador for his species.” And the orca certainly served the company well, proving to be a prolific and viable breeder. He sired 21 calves, 11 of which are already dead. Many of these calves were born through artificial insemination.

Prior to Brancheau's death, SeaWorld had the opportunity to fully recognize the danger and inherent risk involved with people interacting and swimming with killer whales and implement stricter safety measures. Instead, on Dec. 24, 2009, just two months before Tilikum killed Brancheau, a SeaWorld-born, -owned and -trained orca named Keto killed Alexis  Martinez at Loro Parque in Tenerife, Spain. Despite his death and not having any information on the details, management put staffers back in the water swimming with the whales during shows within two days.

Anyone who has worked extensively with killer whales knows that they are capable of aggressive behavior — even to the extreme of Brancheau's fate. During my career as a trainer, I experienced many major in-water aggressions with different whales that could have ended the way they did for Brancheau, Martinez or Byrne, and I was certainly not the only one.

As my career progressed and I witnessed firsthand the mental and physical ravages of captivity, I, like other trainers, selfishly believed that love was enough to make up for the suffering that these whales endured, but it wasn't. Orcas don’t choose to live in minuscule concrete tanks with sterile blue-painted walls. Once they're in captivity, every second of their lives is decided for them — from when they’ll breed to what, how much and when they will eat and whether they will be separated from their offspring.

Captivity brought Tilikum behavioral dysfunction along with chronic illness and the need for constant medications, including antibiotics due to regular and severe infections, some of which could have been caused by how severely damaged his teeth were. Nearly all of his teeth were fractured, worn down to the gumline and manually drilled, and needed daily irrigations.

SeaWorld blamed the condition of Tilikum's teeth on his tenure at Sealand, a claim his former Sealand trainer Steve Huxton has denied. Thus it was not surprising to hear that he was dying from a strain of bacterial infection that was resistant to medication. What many people don’t realize is that decades of scientific literature have documented: Only five species of bacteria have been documented in orcas in the wild, yet 20 different species of bacteria have been documented to be found in SeaWorld’s captive orcas.

Countless people have documented Tilikum lying motionless for hours at the surface of the water as his daily norm. Orcas that live free are constantly moving, interacting and socializing. It isn’t difficult to see why these whales are chronically ill, why they live drastically shortened lives and why they lash out at their captors in frustration. They are shells of what orcas should be. Tilikum didn’t die of old age; he died from infection and disease. In captivity, he reached the age of just approximately 35, like so many whales before him. In the wild, he could have easily reached 50 or possibly even 70.

If Tilikum’s actions were a cry for help, then it worked. He forced us to question what we have done to these majestic animals. The time has come to end this outdated animal entertainment once and for all.

John Hargrove, author of the New York Times bestselling memoir "Beneath the Surface: Killer Whales, SeaWorld, and the Truth Beyond Blackfish" (March 2015), and interviewee for the documentary "Blackfish," continues to advocate for the end of keeping killer whales in captivity and has gone on to support legislation in California and New York.