Republicans love to pose as hard-core patriots. But both the party leadership and its voters have flipped for Putin 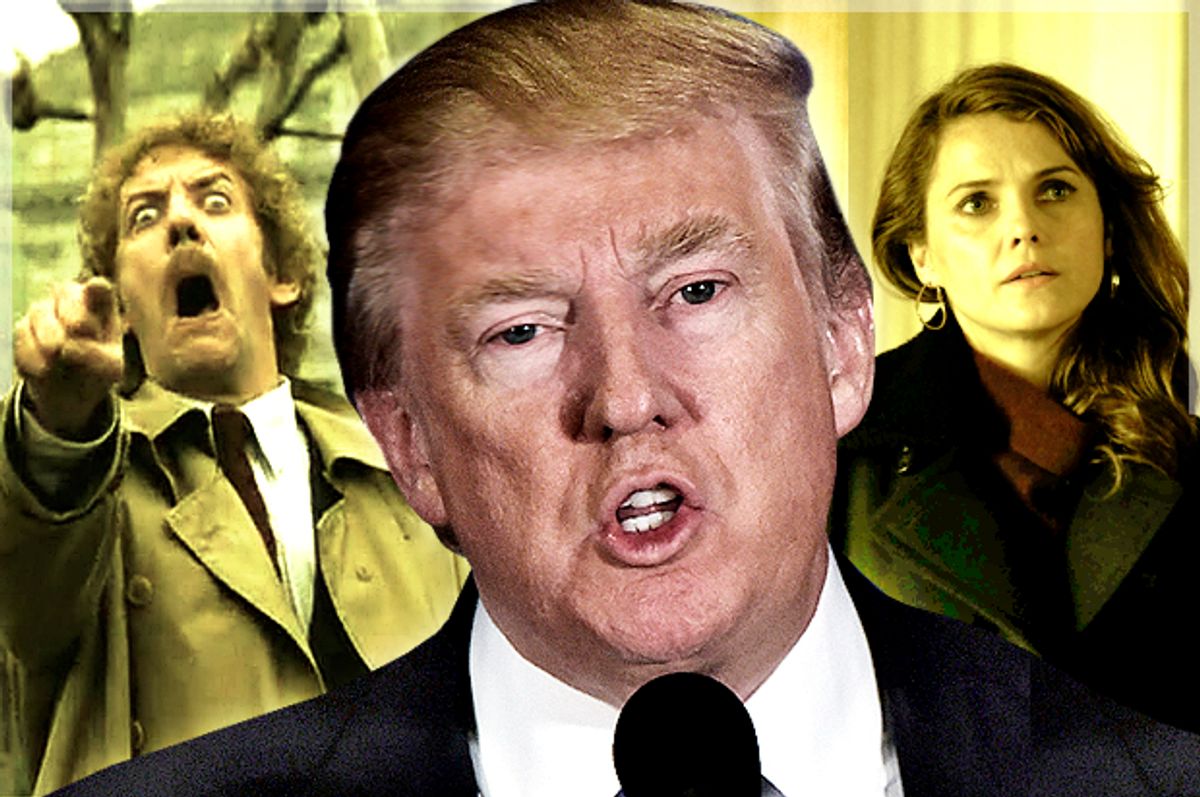 As indicated by a newly released report from the Office of the Director of National Intelligence, it appears that Russia's intelligence agencies, orchestrated by President Vladimir Putin, interfered with the 2016 United States presidential election with the goal of helping Donald Trump defeat Hillary Clinton. They were successful: On Jan. 20, Trump will be sworn in as the 45th president of the United States.

The revelation that one of America's greatest global rivals and its mortal enemy during the Cold War manipulated the 2016 presidential election (as part of a broader plan to attack Western democracies) is the stuff of spy movies and techno-thrillers. But instead of paranoia and fear, Putin's interference has been greeted by learned helplessness on the part of many Americans, impotence from the Democrats and a combination of indifference, obfuscation, denial and outright lying by the Republican Party.

The latter is particularly fascinating. Over the course of several decades, Republicans created a narrative for themselves (largely untrue) that they had and have the party of "national security." For many years the Republican Party imagined itself as comprised of the "coldest" of the Cold Warriors. Yet during a bizarre political season when American fascism is ascendant with Donald Trump, a party and right-wing movement whose political DNA consists of conspiracy-driven John Birchers, paranoid McCarthyites, Christian fundamentalists and Ronald Reagan fetishists have apparently been "flipped" (to borrow from the language of spies and espionage) to support Putin's Russia.

This is not an episode of Rod Serling's classic science-fiction TV show "The Twilight Zone." It is the reality-TV-show-obsessed "post-truth" America of 2016, when, as Neil Postman warned some years ago, "we are entertaining ourselves to death." As a result, our political culture is in deep crisis.

In many ways, this outcome was predictable. Authoritarianism has been on the rise among the American people for at least 20 years — especially among Republicans and, of course, Donald Trump supporters. Adherents of conservatism, a type of motivated social cognition, are attracted by demagogues and political strongmen. Crude masculinity and nationalism are also alluring to conservative authoritarians. In Trump and Putin, American conservatives have found two heroes to swoon over in a right-wing bromance.

The spymasters hold another lesson for American politics in the age of Trump. To win over an asset (an individual who will turn on his or her country), an agent needs to identify the target's needs, wants and vulnerabilities. Those could include money, sex, romance, ego gratification or a desire to feel a sense of belonging and purpose.

Republican elites crave power at any cost. Consequently, they chose partisanship and electoral victory over patriotism and loyalty to the common good.

But what about the rank-and-file Republicans (and others) who rallied to Donald Trump's banner? How do they make sense of the revelations about Russia's interference in the 2016 election?

As detailed in a piece published last Saturday, The New York Times journeyed to "Trumplandia" in search of answers. Its reporters were told the following:

“Sour grapes,” explained Bob Marino, 79, weighing in on the recent spycraft bombshell from the corner table of a local McDonald’s.

“Sour grapes,” agreed Roger Noel, 65, sitting next to him.

But interviews with Trump supporters here in Louisiana, a state the president-elect won by 20 points, and in Indiana, a state he won by nearly the same margin, found opinions about the report that ranged from general indifference to outright derision.

“From the parts of the report I’ve seen,” said Rob Maness, a retired Air Force colonel who twice ran for Senate here as Tea Party favorite, “it seems silly." . . .  Of the comments he had seen from fellow Trump supporters on Facebook and in emails, he added, “90 percent of them are like, ‘What’s the big deal?’”

And perhaps the most troubling response:

In Louisiana, David Gubert, 56, chain-smoked Eagle 20 cigarettes in the cab of his pickup, with stacks of firewood for sale behind him in the bed. Like the Willises, he ruminated on what it would mean if the Russians had gotten involved, and possibly even swung the election.

But Mr. Gubert came to a different conclusion.

These answers can be explained by a number of factors. Trump supporters, like other American conservatives, have been subjected to decades of disinformation by Fox News and right-wing talk radio. Thus the phenomenon described by philosophy or political science as "epistemic closure" has created a fact-free alternate reality for Republicans, their supporters and movement conservatives.

Many Americans come to conclusions about political matters first and then reason backward, discarding any information or facts that are inconvenient or that threaten to change their minds. Partisanship can sustain gross and obvious hypocrisy: If a Democrat such as Hillary Clinton or Barack Obama had been accused of being aided and abetted by a foreign power to win a presidential election, Trump supporters would instead be braying about high crimes, treason and impeachment.

The Americans who voted for Donald Trump are not pod people as in the 1956 classic science-fiction film "Invasion of the Body Snatchers" or brainwashed tools like Frank Sinatra in "The Manchurian Candidate." They are not aliens from another world, even if the differences between red state America and its blue state counterpart often feel insurmountable. Nor were Trump's voters coerced or brainwashed by foreign interrogators. Instead, Trump's supporters made a conscious and active choice to support an authoritarian fascist and demagogue.

It is abundantly clear that Trump's voters have little regard for America's political institutions. It also appears that they do not believe in the sanctity of democracy.  Such cynicism is not unreasonable in an era of the Supreme Court's infamous Citizens United v. the Federal Election Commission decision, a new gilded age of dire wealth and income inequality, a corporate news media that has abandoned most of its responsibilities to properly educate and inform the public and extreme political polarization.

Trump's voters (as well as Republican elected officials) will place few if any checks on the power of the incoming president. Russia did not vote for Donald Trump. Unfortunately, the American people — those who voted for Trump, those who stayed home on Election Day and those who supported third-party candidates in this most critical and unusual election — did it to themselves. Despite whatever plots or machinations were cooked up by Putin and his spies, there is no avoiding that basic truth. This is a pitiable state of affairs. America's democracy has been plundered from within, not from without.