How will Donald Trump govern? Or will he even bother, while Pence and Flynn play two-headed Dick Cheney?

While the president tweets, Mike Pence and Michael Flynn will apparently split up the policymaking. Be afraid 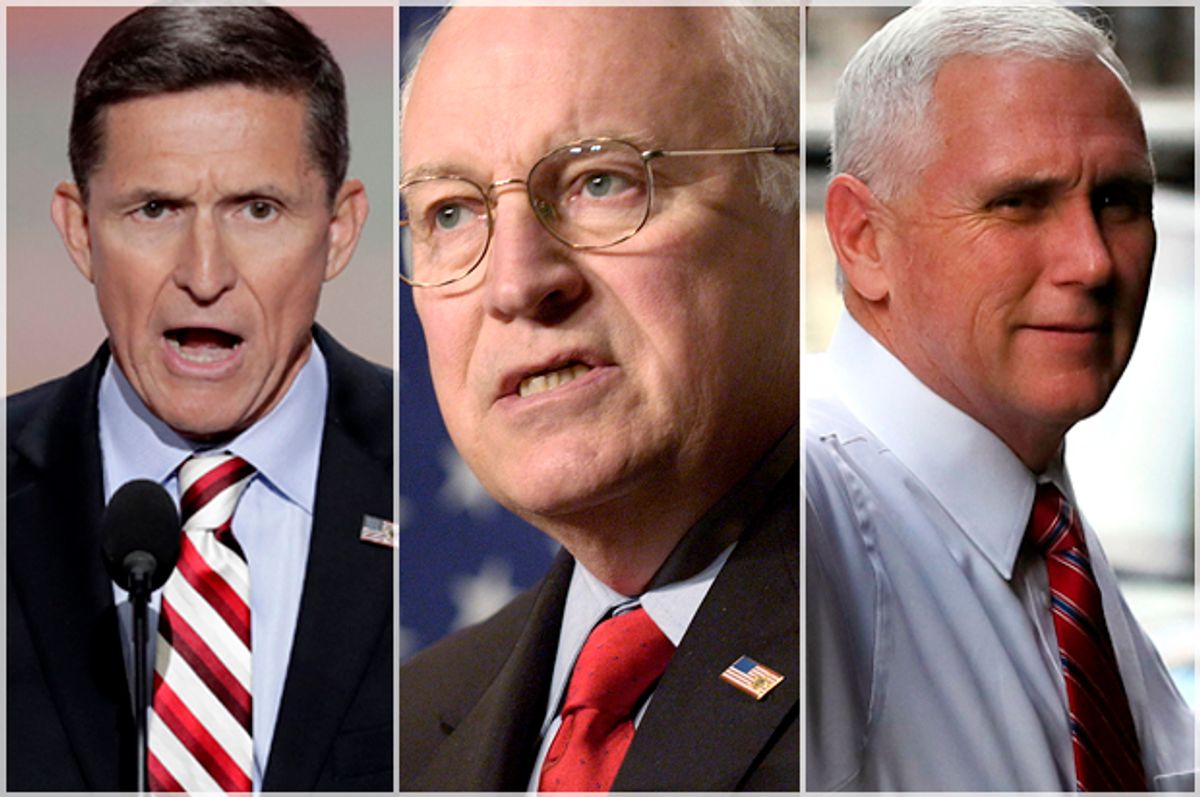 One of the biggest mysteries surrounding the upcoming Donald Trump administration is how the man will govern. There are many presidential styles, including those of micromanaging types like Jimmy Carter, big-picture sorts like Ronald Reagan, the organized disciplined approach of Barack Obama and the chaotic, brainstorming ways of Bill Clinton.

Trump has run only a rather small privately owned family business, at least compared with the scope of a major corporation, a state government or a federal agency. So we don't really know how he'll handle the job of running a giant bureaucracy.

Luckily for Trump, at this moment the other branches are all in the hands of his party. So he can theoretically run the country like a CEO if he chooses. But the decisions he has to make are a bit more complicated than whether the hostesses at his golf courses are pretty enough or the label on his Trump-branded cologne Empire looks sufficiently regal. And since he has no serious understanding of policy and believes he can run the country based solely on instinct, curiosity about his governing style is more acute than usual.

One of the most famous anecdotes from the campaign, which I've referenced before, is this New York Times story about what Donald Trump Jr. allegedly told one of Gov. John Kasich's aides when trying to persuade him to join the ticket:

Did he have any interest in being the most powerful vice president in history?

When Kasich’s adviser asked how this would be the case, Donald Jr. explained that his father’s vice president would be in charge of domestic and foreign policy.

Then what, the adviser asked, would Trump be in charge of?

That's a cute line, but according to an article in Politico Trump is giving wide latitude to all his Cabinet members with an order to radically change everything in the first six months. He does not want to be bothered with the details unless "he sees something as a problem or an issue involves significant publicity or money."

In other words, they can do anything they want. If it works out, he'll take credit. If not, they're on the hook. He will have to sign off on expenditures, which he seems to think is just like signing the weekly check run for the Trump Organization.

Trump believes he's gotten this far by the seat of his pants and that he can run the country the same way. He has no intention of changing. But the likely reality is that the executive branch is going to be run by committee. And from the looks of it, the committee's responsibilities will be divided into two areas: Vice President Mike Pence will be in charge of the domestic agenda, which Trump cares about only in terms of his parochial personal interests and how the cable news networks cover it. Politico has reported:

In the two months since he won the presidency, Trump has underscored his arm’s-length approach. He’s left most of the congressional wrangling to Vice President-elect Mike Pence and other top aides. He doesn’t jump on weekly calls to discuss strategy, members of the transition team say. And he’s told top aides he doesn’t need to know about every problem, according to people who have spoken with them.

This tracks with how he sees the role of members of Congress in governance. They should do their little jobs and shut up about it. Recall this statement by Trump from the campaign:

If people, and especially, you know, where people endorse me, Republican leaders, I think that honestly they should go about their business and they should do a wonderful job and work on budgets and get the budgets down and get the military the types of money they need and lots of other things. And they shouldn’t be talking so much. They should go out and do their job. Let me do my job.

The promised repeal of Obamacare will be the first test of this arrangement. So far, it isn't going so well, what with the Republicans never having bothered to come up with a replacement — one Trump has guaranteed will be the greatest health care plan the world has ever seen. So far, all we've seen is a promise from Sen. Rand Paul, which is best described as "freedom" to buy expensive insurance — if you're lucky enough to qualify.

Meanwhile, all the talk about letting members of the Cabinet run with their wish lists doesn't seem to apply to the national security team, which will be handled by former general Michael Flynn, who has already been reported as butting heads with the incoming secretary of defense, James Mattis, over personnel appointments. Mattis is unhappy with the people the transition team is sending and was none too pleased to find out from the media that it had chosen the secretary of the Army without consulting him. Things have been going downhill from there. Mattis outranked Flynn in the military, but Flynn is the top dog in the Trump administration. This should make for an interesting rivalry.

Former CIA director James Woolsey, who had been advising the transition team and speaking on its behalf, separated himself from it publicly, saying that Flynn and company had excluded him from discussions and he didn't want to be identified with the administration under the circumstances. Woolsey is a hard-core hawk so perhaps that's not such a bad thing. But it does suggest that Flynn's somewhat of a control freak, which isn't such a good thing since he's nutty as a fruitcake.

We don't know exactly where Trump's "counselors," Steve Bannon and Jared Kushner, fit in, but they seem to have their own portfolios and special access to the president. So far, all the evidence points to Trump being a leader who tells everyone what they want to hear in private, believes whatever the last person told him and basically vamps his way through the day until he can plop down with his phone in front of CNN to perform what he clearly believes is the most vital part of his job: tweeting. What could go wrong?