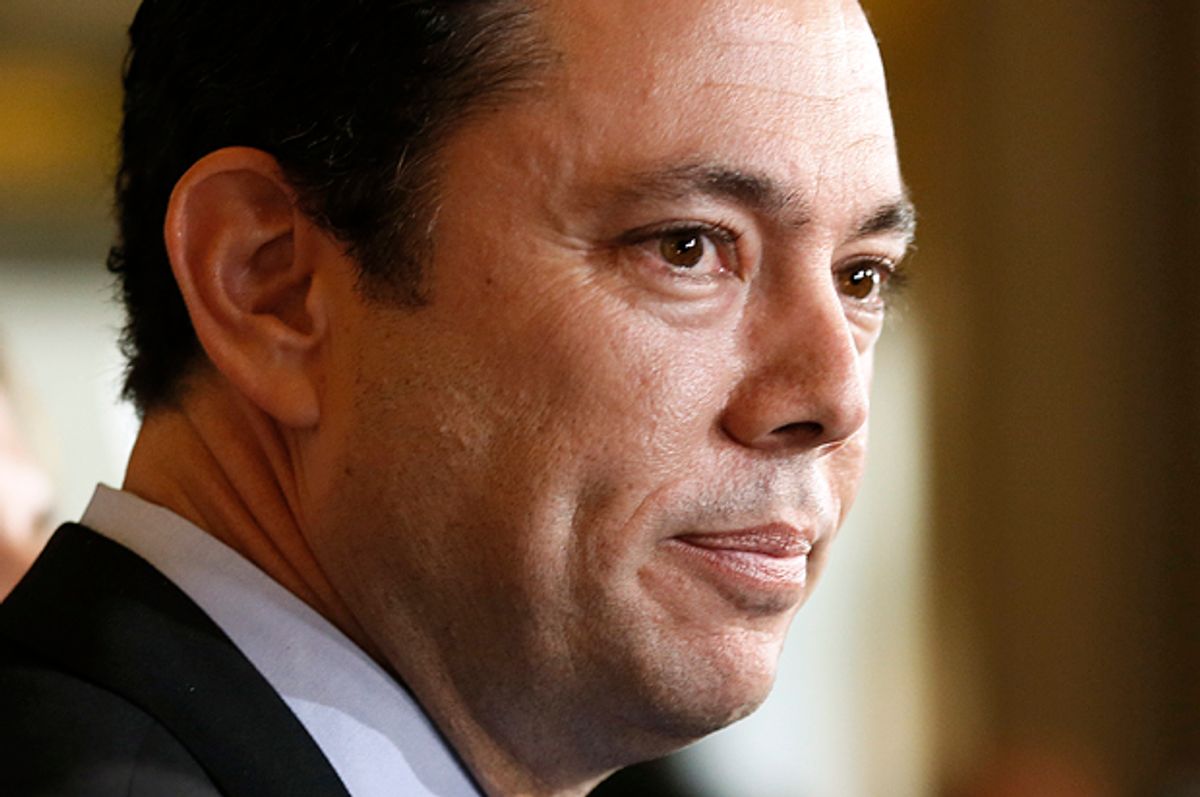 "Genuinely good government requires a commitment to expose waste, fraud, and abuse," reads the mission statement of the House Oversight and Government Reform Committee. "We ultimately report to hard working taxpayers to ensure their investment in government is spent effectively, efficiently, and transparently."

Fighting against corruption and for transparency is  a hard enough job in ordinary times, but next week, Donald Trump will be sworn in as president, bringing with him a level of corruption and scandal previously unseen in the White House. Oh sure, we've have corruption in the executive branch before — Richard Nixon and Warren G. Harding, for example — but these men had to actually spend some time in office to reach the levels of malfeasance that Trump will bring with him on Day One in the Oval Office.

Not only has Trump not done anything substantive to divest himself of his many business interests that create direct conflicts of interest, but a new report shows that he has partial or complete responsibility for more than $1 billion in debt, often to banks over which he will hold regulatory power as president. In addition, Trump has overseas investments and owns a Washington hotel that has already become a favorite for foreign diplomats seeking favor, which likely puts the president-elect in direct conflict with the emoluments clause of the U.S. Constitution.

In the face of this unprecedented level of potential corruption, the chair of the oversight committee, Rep. Jason Chaffetz, R-Utah, seems to be doing nothing — well, nothing regarding Trump, anyway.

These days Chaffetz appears to spend most of his time throwing an extended temper tantrum over Barack Obama's use of the previously noncontroversial powers presidents are granted under the Antiquities Act to designate Bears Ears, a region of Utah precious to many Native American tribes, as a national monument. This makes it harder for mining interests to drill there, and not coincidentally, this is making Chaffetz furious.

Chaffetz's Twitter feed doesn't feature any curiosity about Trump's numerous potential conflicts of interest. But the Utah congressman has been tweeting incessantly about how he is "outraged" by "arrogant" Obama using the national monument designation powers presidents have had since 1906.

Even though there's absolutely no reason to believe that Obama has done anything unethical, much less criminal, in using these 110-year-old powers, Chaffetz is nonetheless trying to wield his power as the oversight committee chair to harass the outgoing administration.

Chaffetz sent letters threatening a subpoena to administration officials, claiming that Obama's "sweeping application of the Antiquities Act raises questions about the administration's commitment to transparency and consultation with local stakeholders with respect to designating national monuments."

In reality, Interior Secretary Sally Jewell did meet with local stakeholders over the summer. The secretary even let the meeting run over time, to make sure that as many people as possible could be heard.

“It’s a little bit disconcerting that the chair of the House Oversight Committee is so preoccupied by what, by any measure, is a fairly minor move by the Obama administration, in comparison to the potential conflict of interests problems looming on the horizon, with President-elect Trump about to take office," said Paul Seamus Ryan of Common Cause in a phone interview. Ryan is vice president of policy and litigation for that nonpartisan organization, which fights for transparency and accountability in government.

What should the oversight committee focus on? “At the top of the list are President-elect Trump’s conflicts of interest," Ryan said. "This is a big deal. We have a lack of information, a lack of transparency with Trump’s business investments as well as his debts, and both matter when it comes to conflicts of interest. This is squarely in the purview of the House Oversight and Government Reform Committee."

Ryan also pointed out that there's significant evidence that Trump could be in violation of the emoluments clause, a matter that should be a priority for the oversight committee.

"We expect Chairman Chaffetz to conduct such hearings, conduct such investigations, and we’ll be calling on him to do so in the coming months," Ryan said.

If Chaffetz fails to do his job for partisan reasons, Ryan added, that constitutes "an abuse of power."

Salon contacted Rep. Chaffetz's Washington office on Monday to ask for a response and did not receive one by the time this article went live.

Chaffetz has been largely silent about Trump's shadiness, but the Democratic ranking member of the oversight committee, Rep. Elijah Cummings of Maryland, has not been so reticent.

On Nov. 14, Cummings sent a letter to Chaffetz requesting that "the Oversight Committee immediately begin conducting a review of President-elect Donald Trump’s financial arrangements to ensure that he does not have any actual or perceived conflicts of interest and that he and his advisors comply with all legal and regulatory ethical requirements when he assumes the presidency."

Cummings added, "We have never had a president like Mr. Trump in terms of his vast financial entanglements and his widespread business interests around the globe" and noted that it " is critical that we conduct this review as soon as possible to ensure that these questions are answered prior to Mr. Trump assuming office."

With less than two weeks to go before Trump becomes president, there's no indication that Chaffetz has any interest in launching such an investigation. Instead, since Cummings sent that letter, Chaffetz has himself written three separate letters bugging Interior Department officials about the Bears Ears monument.

Chaffetz's behavior regarding the Bears Ears monument would be troubling under ordinary circumstances. As oversight chair, Chaffetz is supposed to be rooting out corruption. Instead he's using the threat of subpoenas and investigations to intimidate administration officials for a policy decision favoring the preferences of environmentalists and Native American  groups over the those of the oil and gas industry. That's not fighting corruption.

By refusing to investigate Trump's conflicts of interest two months after his ranking Democratic colleague first asked him to, Chaffetz has shown he is incapable of handling the basic tasks necessary to be chair of the oversight committee. He should step down in favor of a representative who takes the task of fighting corruption in government seriously.