My log has something to tell you: David Lynch waxes surreal for Showtime 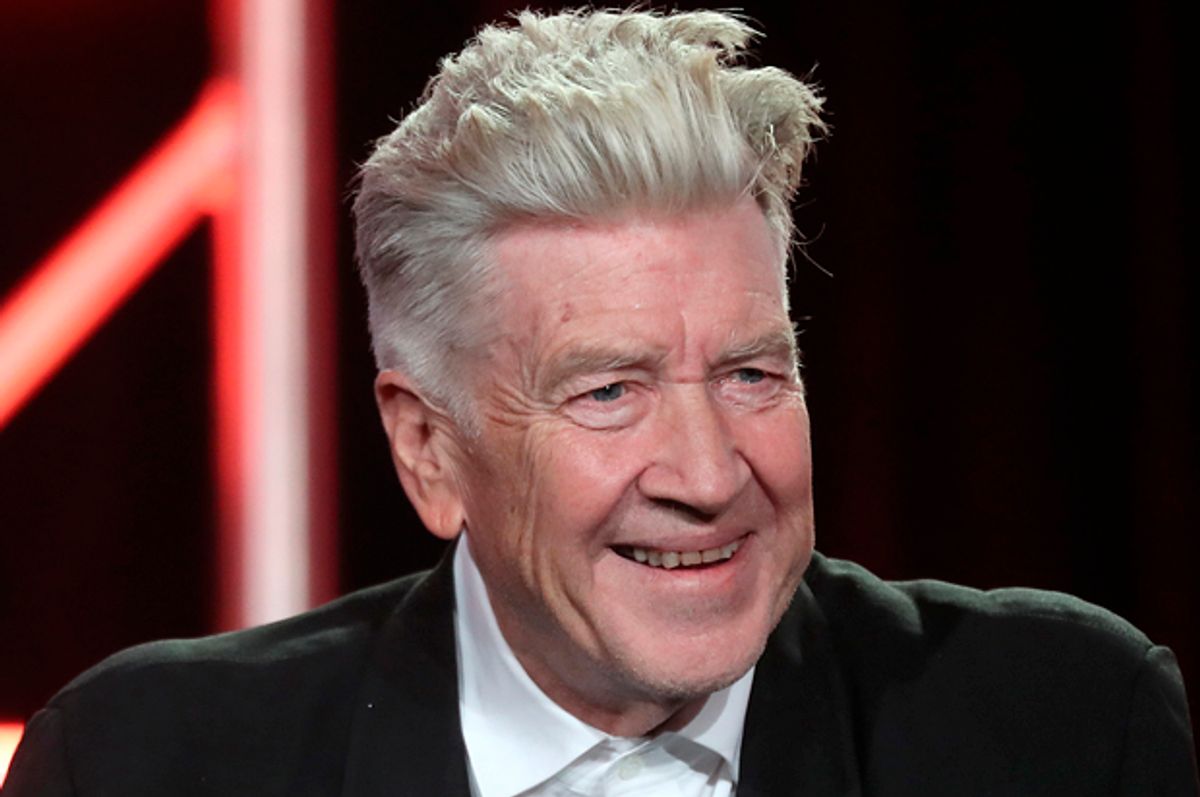 There are many stories in Twin Peaks. Some of them are stories of madness, of violence. Some are ordinary. Yet they all have about them a sense of mystery. And since October 2014, when Showtime first thrilled the known universe by announcing its intent to resurrect David Lynch’s surreal drama, the greatest mystery about “Twin Peaks” was when the revival would premiere.

Well, Diane, on Monday the premium cable channel revealed that “Twin Peaks” will have its two-hour premiere on 9 p.m. Sunday, May 21, on Showtime. The limited-event series consists of 18 hours, with the third and fourth episodes being made available via Showtime’s streaming services immediately after the drama’s over-the-air premiere.

The announcement was made by Showtime's president and CEO, David Nevins, as part of Showtime’s participation in the Television Critics Association winter press tour, currently underway in Pasadena, California. The twice-yearly press tour affords TV critics and reporters from around the U.S. and Canada the opportunity to interview the stars and producers of broadcast and cable television, as well as granting them access to network executives.

“Twin Peaks” stands as Showtime’s most buzzworthy endeavor in recent seasons, destined to dominate the entertainment-industry hype machine in the weeks leading up to its premiere.

Adding to this frenzy is Lynch’s insistence on shrouding the entire project in mystery. (Filming was wrapped up in April.) During last July’s press tour, Showtime teased reporters and critics with the promise of “exclusive new footage,” which lamely consisted of brief testimonials from its stars, namely Kyle MacLachlan (reprising the role of FBI Special Agent Dale Cooper), along with B-roll of Pacific Northwest conifers.

Showtime upped the ante on Monday with a surprise visit by Lynch himself, who appeared for a scant 15 minutes to eloquently deflect efforts to glean any substantive information about the show’s new storyline. Showtime also hosted a “Twin Peaks” panel that featured MacLachlan, Mädchen Amick, Laura Dern, Robert Forster and Kimmy Robertson, who were all under strict orders to not reveal anything about the new season. So that was . . . an exercise.

Speaking with the creator of "Twin Peaks" was a ball nevertheless. This is David Lynch, after all, who also gave the world such mind-altering film as “Blue Velvet,” “Lost Highway” and “Mulholland Drive.” Even the most innocent questions took reporters to bizarre and wonderful places. Consider this exchange between a reporter seeking harmless color about Lynch's working relationship with his “Twin Peaks” co-creator Mark Frost.

“Can you talk a little bit about how you and Mark worked together, how you divided duties, and . . . what he is as a partner for you?” the reporter asked.

Lynch replied, “Well, in the beginning, many years ago, we were, Mark and I, as if lost in the wilderness, as it always is in the beginning. And then we seemed to find some mountain, and we begin to climb, and when we rounded the mountain, we entered a deep forest, and going through the forest for a time, the trees began to thin.”

At this point some of us wondered if Showtime had not dosed the damn fine coffee it made available to reporters that day.

The room went silent for a beat, and then the reporter tried again. “How did you and Mark work together?”

Later on someone asked, “When you were coming back to ‘Twin Peaks,’ was Laura Dern always someone you wanted to be involved?”

That earned the reply of “I love Laura Dern.”

The press conference went on like that, with Lynch being pleasantly taciturn when it came to specifics about the project — save for one detail, yielded when a reporter asked whether the director’s 1992 theatrical prequel to the series “Twin Peaks: Fire Walk with Me” would have any bearing on the upcoming episodes.

“It’s the story of Laura Palmer’s last seven days,” Lynch teased. “Very much important for this.”

“Twin Peaks” became a cult hit on ABC from 1990 to 1991. In the first rendition of the series, MacLachlan's Special Agent Cooper came to the Washington state logging town to investigate the murder of homecoming queen Laura Palmer (Sheryl Lee, who also is returning for the 2017 version).

Its offbeat, dreamy tone entranced viewers with the oddities of the Pacific Northwest, particularly as filtered through bizarre Twin Peaks residents such as the Log Lady, originally played by the late Catherine E. Coulson. A number of actors from the original cast are returning for the 2017 version, although among those unable to return are Piper Laurie, Lara Flynn Boyle, Joan Chen, Michael Ontkean and Heather Graham.

Last spring Showtime released the lengthy cast list for the 2017 limited series and it included several folks whose fame ascended during the same era as the original series, notably Tim Roth and Eddie Vedder. Other "Twin Peaks" newcomers were in kindergarten (Jessica Szohr and Amanda Seyfried) or toddlers (Michael Cera) when the series first aired.

Nevins assured reporters that the new episodes are true to the spirit of the original series.

“The version of 'Twin Peaks' you’re going to see is the pure heroin version of David Lynch,” he said. “And I’m very excited to be putting that out.”

Asked for his thoughts on that remark, Lynch deadpanned, “I hear heroin is a very popular drug these days.”