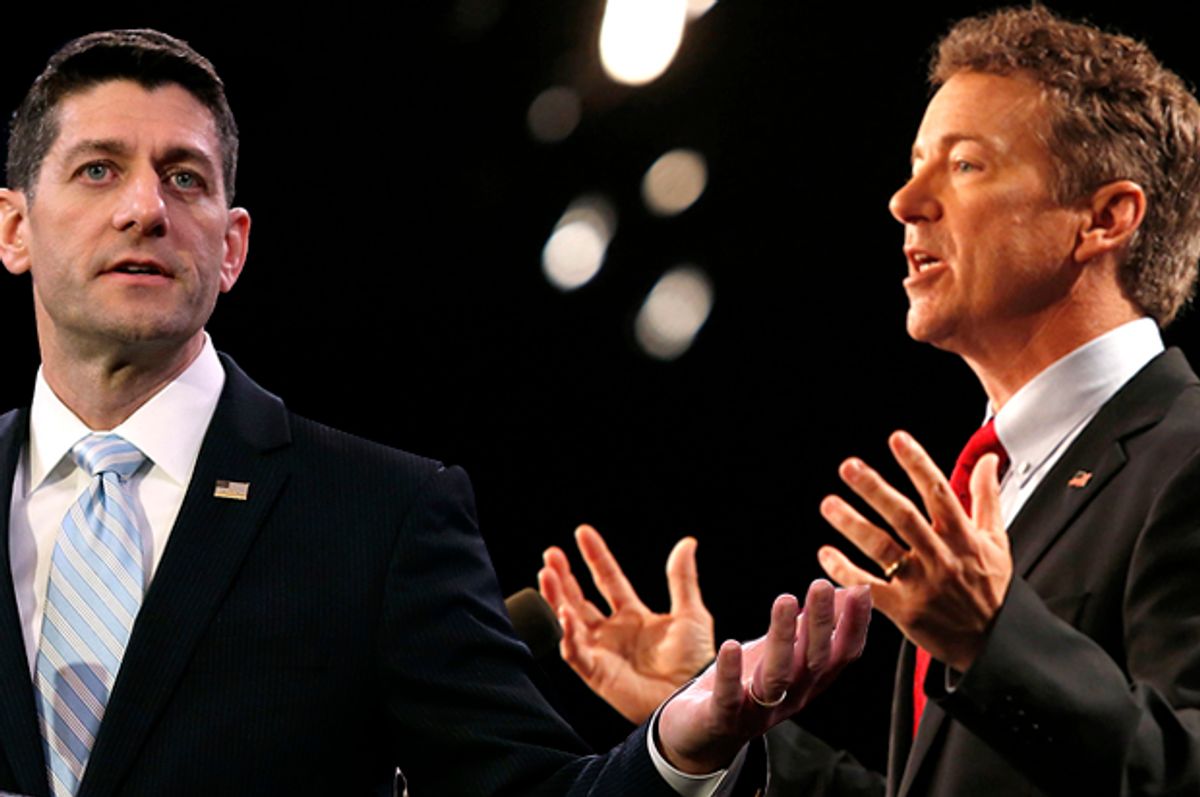 After eight years of bashing Obamacare, congressional Republicans still haven’t come up with a plan to replace it. They are, however, essentially unified in wanting to stop the Congressional Budget Office from estimating how much a repeal might cost.

While the media and most Democrats were focusing on the House of Representatives voting to weaken the Office of Congressional Ethics (a measure that was subsequently retracted), the larger document that the initiative was part of also prohibited the office from analyzing proposals to repeal the Affordable Care Act.

Responding to the provision on the floor of the House on Jan. 3, Rep. Jim Clyburn, D-S.C., condemned it and the Republicans:

“They’re admitting in their own rules that their proposal to repeal the Affordable Care Act will be devastating to the federal deficit and the national debt,” he said.

Two representatives for House Speaker Paul Ryan did not respond when contacted by Salon asking about the Congressional Budget Office restriction.

Buried on page 25 of the “Rules of the House of Representatives” is language instructing the CBO, an independent government research agency that answers to both House and Senate, to automatically perform estimates on any piece of legislation that might increase federal spending by more than $5 billion at any point in the 40 years following 2028.

That’s very fine-grained analysis, considering that the federal government spends just under $4 trillion a year. Assuming a static amount of $3.85 trillion is spent annually over the next 40 years (a generous assumption), this means the House GOP is interested in a detailed analysis of spending down to the nearest 0.003 percent.

That’s an incredible attention to detail that House Republicans are asking for, but there's one significant exception to the CBO requirements. Under the House rules, which passed on a party-line vote without any Democrats in favor, the CBO is not required not analyze “any bill or joint resolution” that repeals or modifies Obamacare.

According to Hill and agency officials speaking on background, the provision does not mean that CBO is blocked from analyzing Obamacare measures but rather that it is not required to analyze every one that might be presented by various members.

Sources tell Salon that this partial exemption from mandatory analysis procedures is because there have been several general proposals floated by GOP members of Congress to change the Affordable Care Act and the agency simply does not have the resources to evaluate every one of them. Some Hill insiders view the provision as a means of the Republican leadership to place restrictions on when and how the CBO can analyze Obamacare measures, potentially making them appear more favorable to the public.

According to an analysis produced by the CBO last June of the broader contours of some GOP repeal and replace proposals, repealing Obamacare would increase the federal budget deficit by about $137 billion over the next 10 years. Using another method of calculation, the repeal would add $353 billion.

Republicans have generally been skeptical of the budget office since Newt Gingrich served as the House speaker in the 1990s, largely because, like most mainstream economists, the CBO has historically declined to assume that tax cuts for wealthy people will automatically increase revenue, a core tenet of the supply-side orthodoxy that has dominated Republican politics since the 1980s.

Recently, the CBO has been required by the GOP Congress to implement a new "dynamic scoring" method designed to represent that tax reductions can stimulate some economic growth. The calculation tweak has not been sufficient in the view of many conservatives, however. (The $137 billion deficit number mentioned above is the "dynamic score" of the legislation.)

Gingrich has continued his animus against the “reactionary socialist institution” since that time. In 2011 the former presidential candidate even called for the agency to be eliminated entirely.

“If you are serious about real health reform, you must abolish the Congressional Budget Office because it lies,” Gingrich said at a public debate sponsored by a conservative group.

Other Republicans have also spoken out against the agency, despite the fact that it's headed by a stalwart member of their party. In September Rep. Tom Price, R-Ga., was among several GOPers who gently accused the budget office of bias against conservative ideas. Price is now President-elect Donald Trump’s nominee to head the Department of Health and Human Services.

Beyond the role of the CBO in evaluating Obamacare replacement proposals, the rules for the new congress also suggest that Hill Republicans are aware that their Affordable Care Act revision proposals are likely to increase spending instead of reduce it. The $5 billion spending increase threshold mentioned above also is used as a restriction on members to prevent them from introducing bills or amendments which increase spending beyond the amount without permission from the House leadership. Attempting to do so would subject House members to a "point of order" which could easily disqualify their measures from consideration.

In the view of every professional and political staffer contacted for this article, the new House Rules explicitly and automatically protect Obamacare bills and amendments from this type of complaint, even if they still must be considered by the CBO.

"That section of the GOP Rules Package won't prevent the CBO from producing estimates, but it does prevent procedural objections from being raised against repeal and replacement bills that would increase spending in the long-term outside of the existing rules," said Christopher Schuler, the communications director for John Yarmuth, the ranking member on the House Budget Committee.

"Ultimately, it shows the hypocrisy of House Republicans when it comes to deficit control," he added.

Seemingly aware that Obamacare repeal efforts will increase the federal deficit, Republican senators voted on Wednesday for a preliminary measure designed to raise the national debt ceiling by $9 trillion, even as they insisted they weren't in favor of spending more money.

“The resolution is designed for one purpose only, to serve as a vehicle to repeal Obamacare,” Sen. Ted Cruz, R-Texas, told the McClatchy news service. Cruz, readers will recall, led an abortive 2015 effort to block raising the debt ceiling — while Barack Obama was president.

There was only one GOPer who did not vote for the debt limit increase: Sen. Rand Paul of Kentucky. Paul belongs to a small faction of dissenting Republicans who are willing to point out their party’s hypocrisy on fiscal responsibility when they hold the White House.

In an acerbic Senate floor speech last Wednesday, Paul blasted his party. “The more things change, the more they seem to stay the same,” he said, adding that he would refuse to vote for the GOP budget as it did not balance.

Only a handful of other Republicans have been receptive to Paul’s message thus far. Just three GOP members voted to oppose the new House rules.

That situation may change, however, as Paul has been making overtures to the conservative House Freedom Caucus. Additionally, several Republican senators have been saying that they oppose repealing the Affordable Care Act without also offering a replacement. As it stands, the GOP has only a tiny margin for error in the Senate where it has only a 52-seat majority.

Update 2017-01-12. Responding to this story, several Hill insiders have noted that the House Rules referenced above are written ambiguously and that saying CBO is not required to analyze every Obamacare revision proposal does not necessarily mean that the agency is prohibited from evaluating them. This story and headline has been updated to reflect these views.