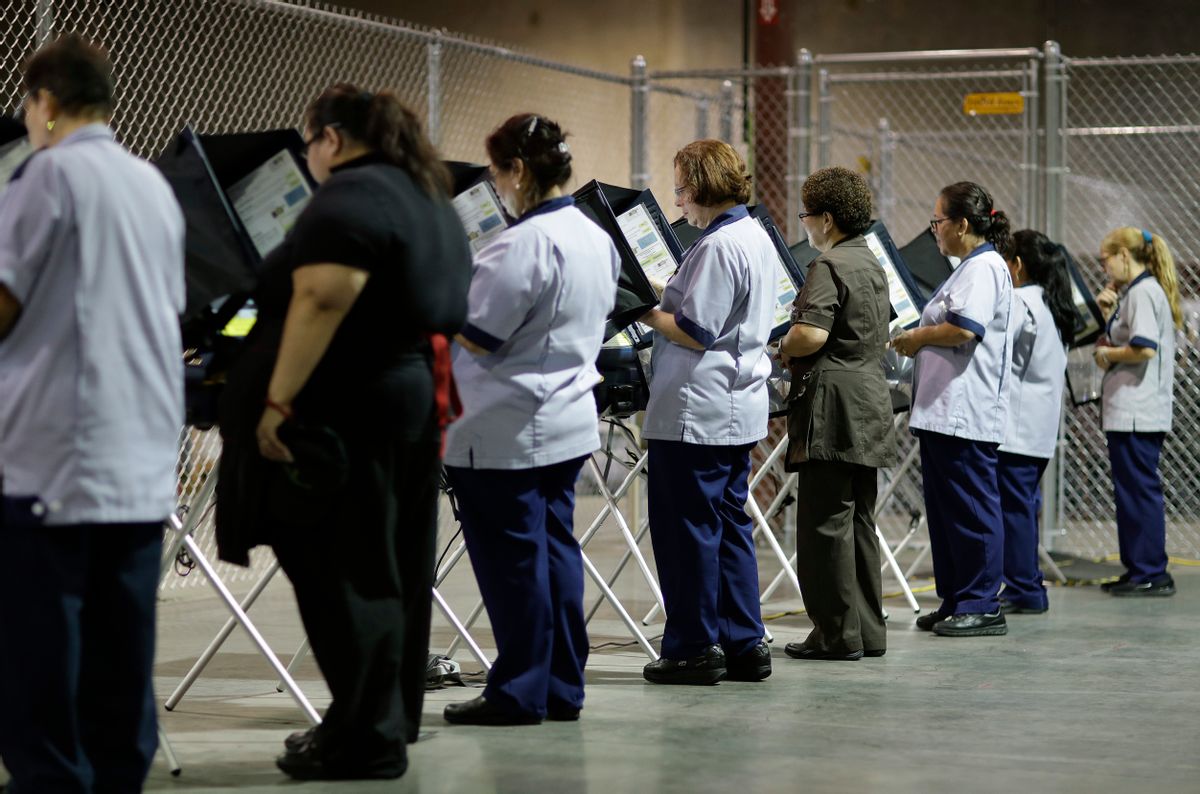 In this Oct. 26, 2016, photo, casino workers vote at an early voting site in Las Vegas. With Election Day approaching, many small businesses want to make it easy for staffers to vote. So they’re giving them flex time, balloting breaks or are opening several hours late. (AP Photo/John Locher) (AP)
--

The election of 2016 may well have been stolen — or to use Donald Trump's oft-repeated phrase — "rigged," and nobody in the media seems willing to discuss it.

The rigging was a pretty simple process, in fact: in 27 Republican-controlled states (including critical swing states) hundreds of thousands (possibly millions) of people showed up to vote, but were mysteriously blocked from voting for allegedly being registered with the intent to vote in multiple states.

Greg Palast, an award-winning investigative journalist, writes a stinging piece in  Rolling Stone magazine (August 2016 edition), predicting that the presidential election had already been decided: "The GOP's Stealth War Against Voters." He also wrote and produced a brilliant documentary on this exact subject that was released well before the election, titled The Best Democracy Money Can Buy.

He said a program called the Interstate Voter Registration Crosscheck had been quietly put together in Kansas and was being used by Republican secretaries of state in 27 states to suppress and purge African American, Asian and Hispanic votes in what would almost certainly be the swing states of the 2016 election.

Crosscheck was started by Kansas Secretary of State Kris Kobach back in 2007 under the guise of combating so-called voter fraud. In the ultimate thumb in the eye to the American voter, the state where Crosscheck started was the only state to refuse to participate in a New York Times review of voter fraud in the 2016 election, which found that, basically, there wasn't any fraud at the level of individual voters. Turns out, according to Palast, that a total of 7 million voters—including up to 344,000 in Pennsylvania, 589,000 in North Carolina and up to 449,000 in Michigan (based on available Crosscheck data from 2014)—may have been denied the right to have their votes counted under this little known but enormously potent Crosscheck program.

Yes, that's way more than enough votes to swing the 2016 election to Hillary Clinton and the Democrats. But no one seems to care.

Not Hillary Clinton, not the DNC, not the New York Times, not the Washington Post, not even MSNBC. In fact, on November 26, MSNBC Host Joy Reid ended her interview of Greg Palast by saying, "I wish more people would listen to what you have to say."

But he was never asked back, by Joy or anyone else at MSNBC.

Why wouldn't the media and lawyers swoop in to every swing state and demand that every single purged, provisional or uncounted vote either be counted or verified to be illegitimate?

Why is it more relevant to focus on a crazed and completely unsubstantiated and untrue allegation about 3 million “illegal aliens” voting, but not a claim by a fellow journalist that 7 million American citizens weren't allowed to have their votes counted?

Yes, Hillary was insistent that we must accept the results of the election, but doesn't that require legitimate, verified or verifiable results? A coach who questions a call on the field is not challenging the system, he just wants to make sure the result is accurate.

So maybe investigative journalist Greg Palast is completely wrong. Completely inaccurate. Maybe there weren't 7 million voters who were at risk of being excluded, with millions of them being handed “placebo" ballots (provisional ballots) that almost never get opened or counted. Maybe it's only a million or two citizens. The problem is that the Republican secretaries of state are refusing to say, and the press has dropped the topic.

What we do know is that there is a program called Crosscheck implemented in 27 states that serves to disqualify voters who are not qualified to vote, trying to vote multiple times, or trying to defraud the electoral system. And if Palast's reporting (and interview of Kobach) is accurate, that system is primarily being used to disenfranchise large numbers of African American, Hispanic and Asian voters.

In 2016, the Democratic Party and the American media and American people have wrongly decided that America should not count the votes that were notcast in Michigan, Wisconsin, Pennsylvania, and so many other places that determined the presidency of the United States.

The DNC and the press need to get on this story now.