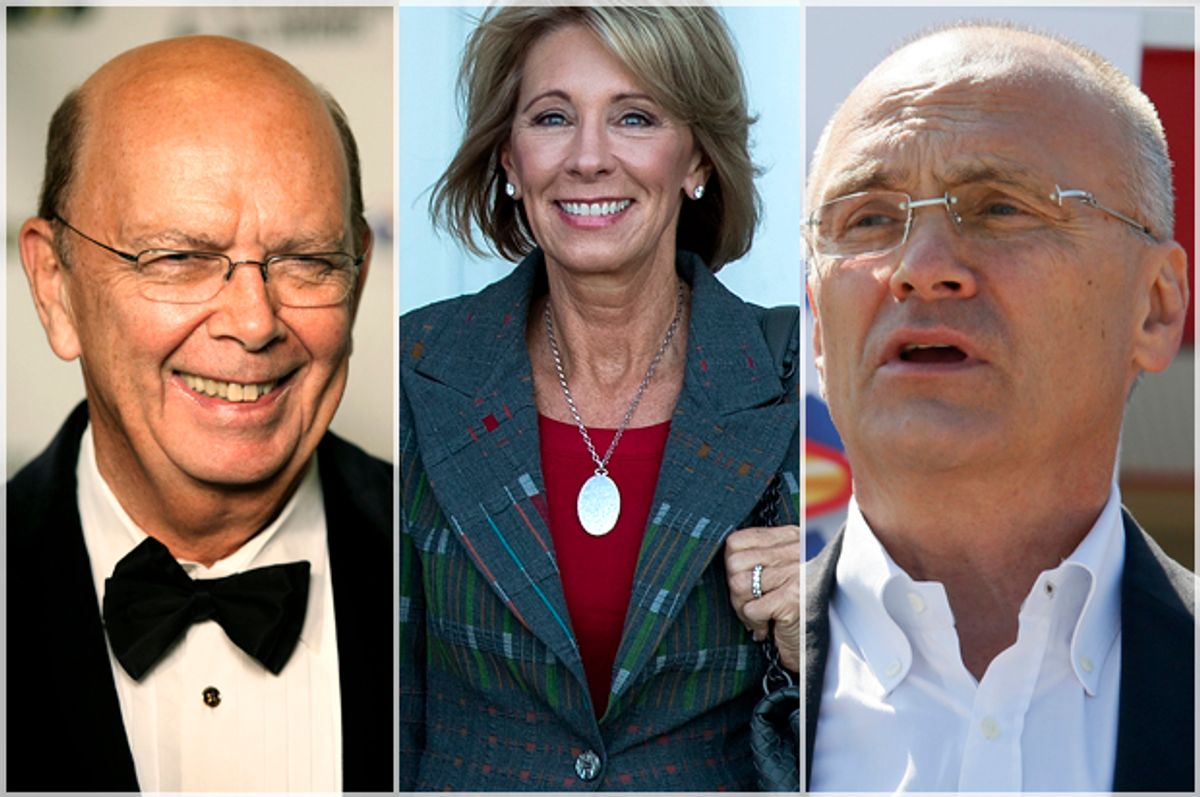 Facebook
Twitter
Reddit
Email
Donald Trump's plan to kick off his presidency with a shock-and-awe campaign to stack a flurry of contentious Cabinet confirmation hearings at the same time has been stalled, as several of Trump's most controversial nominees have had their Senate confirmation hearings postponed as vetting of their complex record continues.
So much for Trump running the nation like an efficient business.

Just as the first of the president-elect's Cabinet nominees sat for his first day of testimony on Tuesday, several Senate committees announced that the confirmation hearings of Trump nominees who have failed to return completed critical questionaries and disclosures would be pushed back — some after the inauguration.

Democrats are taking credit for the delays after days of public calls to slow down the process in order for the Senate to properly examine potential conflicts of interest for some of Trump's wealthiest and most controversial nominees.

“This new hearing schedule is a very good first step, but we still have a ways to go,” Senate Minority Leader Chuck Schumer said Tuesday on the Senate floor.

Senate Republicans originally planned to rush through six hearings on Wednesday, which is also the day Trump plans to hold his first press conference since the Democratic National Convention. But several of Trump's nominees did not get the necessary background paperwork to the Office of Government Ethics, which helps federal officials address conflict of interest matters, with enough time to vet the information before this week's hearings.

Trump's nominee to head the Department of Education, Betsy DeVos, reportedly submitted her financial disclosures to the Office of Government Ethics last month but has not yet finalized or signed the paperwork. As the Washington Post noted, the billionaire charter school advocate's "vast wealth and considerable financial holdings have overwhelmed the bipartisan Office of Government Ethics." The office has not finished examining DeVos' investments for possible ethical concerns, the newspaper reported Saturday. DeVos' hearing has subsequently been pushed back to Jan. 17.

The delay of DeVos' hearings has also forced another one of Trump's billionaire Cabinet nominees to have his confirmation hearing postponed. Because DeVos's hearing will be held by the Senate HELP committee, Andrew Puzder, the CEO of CKE Restaurants who Trump nominated to be Labor Secretary, will have to have his hearing delayed. An aide to the HELP committee said that Puzder's hearing may actually not be held until February "because of the complicated Senate calendar in January."

The news of Puzder's hearing postponement comes as a new survey released this week found that 66 percent of women who work at Puzder's fast-food restaurants (Carl's Jr. and Hardee's) reported experiencing sexual harassment in the workplace — a rate much higher than the industry average. Several fast-food workers appeared on Capitol Hill Tuesday to provide the testimony against Puzder that Republicans on the HELP committee has already vowed to block from entering the public record. Puzder has been a vocal opponent of increasing the minimum wage and has harshly criticized the so-called "Fight for $15" movement.

After the HELP committee announced the delay late Tuesday, the news only got worse for Puzder's prospects of being confirmed. A spokesperson for Puzder confirmed to Politico that Puzder's ex-wife appeared on an episode of “The Oprah Winfrey Show” to accuse him of domestic violence in the 1980s. Puzder has denied the allegations that his ex-wife has since retracted, but several national women's groups have already galvanized around Puzder's treatment of women in his personal and professional life.

“I can’t imagine a single organization that cares about women that would not vigorously oppose him,” said Terry O’Neill, president of the National Organization for Women.

Also on Tuesday, the Senate Commerce Committee announced that it would postpone the confirmation hearing for Trump's choice to lead the Commerce Department, billionaire Wilbur Ross, from this Thursday to Wednesday, Jan. 18 because the committee has not yet received the nominee's ethics agreement.

In a statement, Sens. John Thune, R-San Diego, and Bill Nelson, D-Florida, the chairman and ranking member of the committee, respectively, said Ross has yet to submit key paperwork regarding ethics considerations:

The general practice of the Senate Commerce Committee has been to require complete applications on candidates for Senate confirmation before holding a hearing. While Mr. Ross has submitted his responses to the committee’s questionnaire, we have not yet received the ethics agreement he is working on with the Office of Government Ethics and the Department of Commerce to finalize.

The billionaire who helped restructure the U.S. steel industry will now face a Senate committee on Jan. 17.