Jeff Sessions would be a disaster for the LGBT community: Trump’s attorney general pick has spent his career opposing equality at every level

Name the minority group and Sessions has spent his long, varied career in public life fighting rights of its member 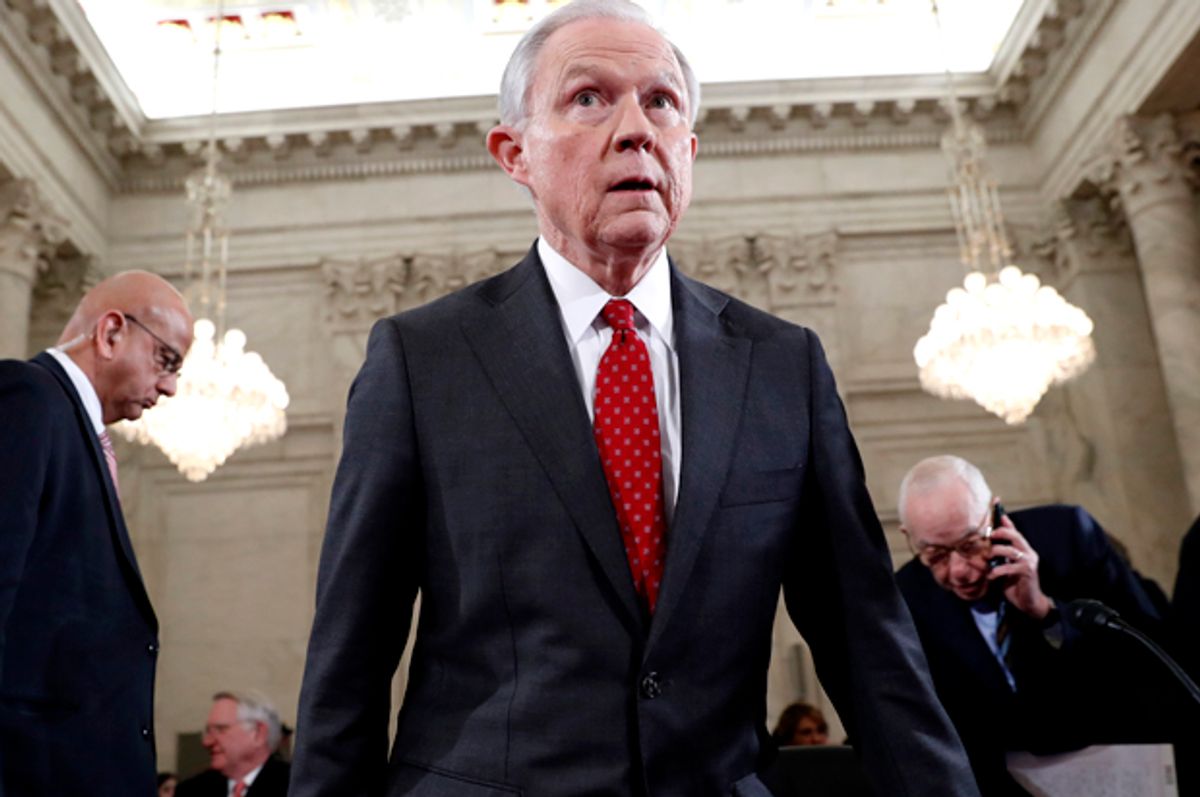 New Jersey Sen. Cory Booker testified today against the confirmation of Alabama Senator Jeff Sessions as Attorney General in a speech as impassioned as it was unprecedented. A sitting U.S. Senator had never testified against the Cabinet appointment of a colleague, and he was joined in that effort by Rep. Cedric Richmond (D-La.), the chairman of the Congressional Black Caucus, and Rep. John Lewis (D-Ga.).

Each of these men highlighted Sessions’ noted history as a virulent opponent of civil rights — especially when it comes to people of color, women and the LGBT community.

“The arc of the moral universe does not just naturally curve toward justice, we must bend it,” Booker said. “America needs an attorney general who is resolute and determined to bend the arc. Sen. Sessions record does not speak to that desire, intention or will.”

You name the minority group, and Sessions has spent his long, varied career in public life fighting its members basic rights. The Cabinet nominee, who has alternatively served as a legislator, district attorney and the attorney general of Alabama, is known for his antipathy toward the black community. Thomas Figures, an assistant U.S. attorney who worked under Sessions in the 1980s, claimed that his boss frequently referred to him as “boy.” Figures further alleged that Sessions had called the NAACP “un-American” and joked that his only problem with the Ku Klux Klan was that its members smoke marijuana.

During Tuesday’s confirmation hearings, Session attempted to assuage concerns that he would gut legal protections for marginalized groups if officially named attorney general. Sessions claimed that he would uphold “the statutes protecting [LGBT people’s] safety” and ensure that the community’s “civil rights are enforced.”

That statement seems to be more supportive of LGBT rights than it actually is. The problem with Sessions’ pledge is twofold: First, there are extremely few federal laws that ensure equal rights for the LGBT community. Second, Sessions voted against the introduction of the handful of nationwide protections that do exist. For instance, he came out against reauthorizing the Violence Against Women Act in 2013, a bill that prevents shelters for victims of domestic violence from shutting their doors to LGBT abuse survivors. He wanted a watered-down version of the legislation without provisions about gender identity and sexual orientation.

An earlier vote shows why he opposed the Violence Against Women Act: Sessions doesn’t believe that LGBT people experience discrimination. When voting against the passage of the Matthew Shepard and James Byrd Jr. Hate Crimes Prevention Act in 2009, Sessions claimed that the legislation simply wasn’t necessary.

“Today, I'm not sure women or people with different sexual orientations face that kind of discrimination,” Sessions said. “I just don't see it.”

Sessions is wrong on both counts. LGBT people, particularly trans women of color, are more likely than any other group to be targeted for a bias attack. Research also shows that queer individuals are just as likely as heterosexuals to be victims of domestic violence, but shelters often ignore LGBT survivors when it comes to resources and programming, turning them away.

Research from the Center for American Progress shows that 10 percent of workers claim to have been terminated from their place of employment because of their sexual orientation or gender identity, but no federal statutes protect LGBT people from being fired on the basis of their identity. That treatment is still perfectly legal in 28 states. Surveys have shown that 9 out of 10 Americans believe that these nondiscrimination protections in the workplace already exist. When they discover that such laws are not currently in place, they are overwhelmingly in favor of enacting them.

These protections do not exist largely due to the work of people like Sessions. The Alabama senator has voted against a federal law, known as the Employment Non-Discrimination Act, that would prohibit LGBT workers from being fired just because of who they are.

In fact, Sessions has often acted to undermine proposed protections. In addition to refusing to sign a pledge saying that his office wouldn’t fire staffers for being LGBT, he is a co-sponsor of the First Amendment Defense Act. FADA is a “religious liberty” bill that would allow businesses to openly discriminate against LGBT people based on the belief that marriage is a union between one man and one woman. The bill, which President-elect Donald Trump has pledged to sign in office, would hypothetically let an employer terminate a gay man for keeping a photo of his husband on his desk.

Sessions has been a leading critic of same-sex marriage rights during his two decades in the Senate, a stance that has earned him a zero rating on equality from the Human Rights Campaign. He more than deserves the score. Sessions once claimed that the Supreme Court's 2015 Obergefell v. Hodges decision regarding same-sex unions “goes beyond what I consider to be the realm of reality.” As the highest-ranking attorney in the nation and head of the Department of Justice, Sessions would be charged with upholding this decision.

Sessions has supported adding an amendment to the Constitution that would limit the definition of marriage to heterosexual couples. The right-winger has said he would continue to push Congress to block same-sex marriage “again and again,” as the Human Rights Campaign has reported.

Those who believe that appointing Sessions to replace Loretta Lynch — a fierce advocate for LGBT equality — will be a disaster for the community won’t have a difficult time finding additional evidence to support that thesis.

In 1996 he attempted to prevent the yearly Southeastern Lesbian, Gay, Bisexual College Conference from being held at the University of Alabama. Sessions, then the U.S. attorney for the Southern District of Alabama, claimed that the conference was prohibited from meeting because of a 1992 law making it unlawful for state-funded universities to support any organization that promotes “actions prohibited by the sodomy and sexual misconduct laws.” Judge Myron Thompson, a former federal judge for the Middle District of Alabama, overturned the law in response, saying it violated the conference’s First Amendment rights.

Defenders of Sessions’ record, which have included Delaware Democrat Sen. Chris Coons, would argue that it’s difficult to judge how he would lead the Department of Justice from his previous positions as a legislator and a U.S. district attorney.

But unfortunately, we do know what his tenure as attorney general would be like. Sessions stated during his confirmation hearing that he would “consider” bringing back the Obscenity Prosecution Task Force, a disbanded office in the Department of Justice that was shuttered by President Barack Obama. While that office is charged with prosecuting cases of child pornography, obscenity laws have frequently been used to target the freedom of expression of LGBT people. Most famously, beat poet Allen Ginsberg was brought to trial in 1957 concerning “Howl,” an epic poem that describes sexually explicit acts between men.

America has come a long way in terms of LGBT acceptance since then, but Sessions hasn’t. This is the same man who once threatened to pull funding for the National Endowment for the Arts due to its financing of “Watermelon Woman,” a 1996 film that was the first full-length feature to be directed by a black lesbian filmmaker. A pivotal scene in the movie features graphic sex between its interracial romantic leads.

“I understand the demands for justice and fairness made by the LGBT community,” Sessions testified on Tuesday. “I understand the lifelong scars born by women who are victims of assault and abuse.” That would be easier to believe if he had not spent his entire career inflicting those very wounds.