Race, class, and intrigue all play a role in this new FX drama, but what the show says about them is unclear 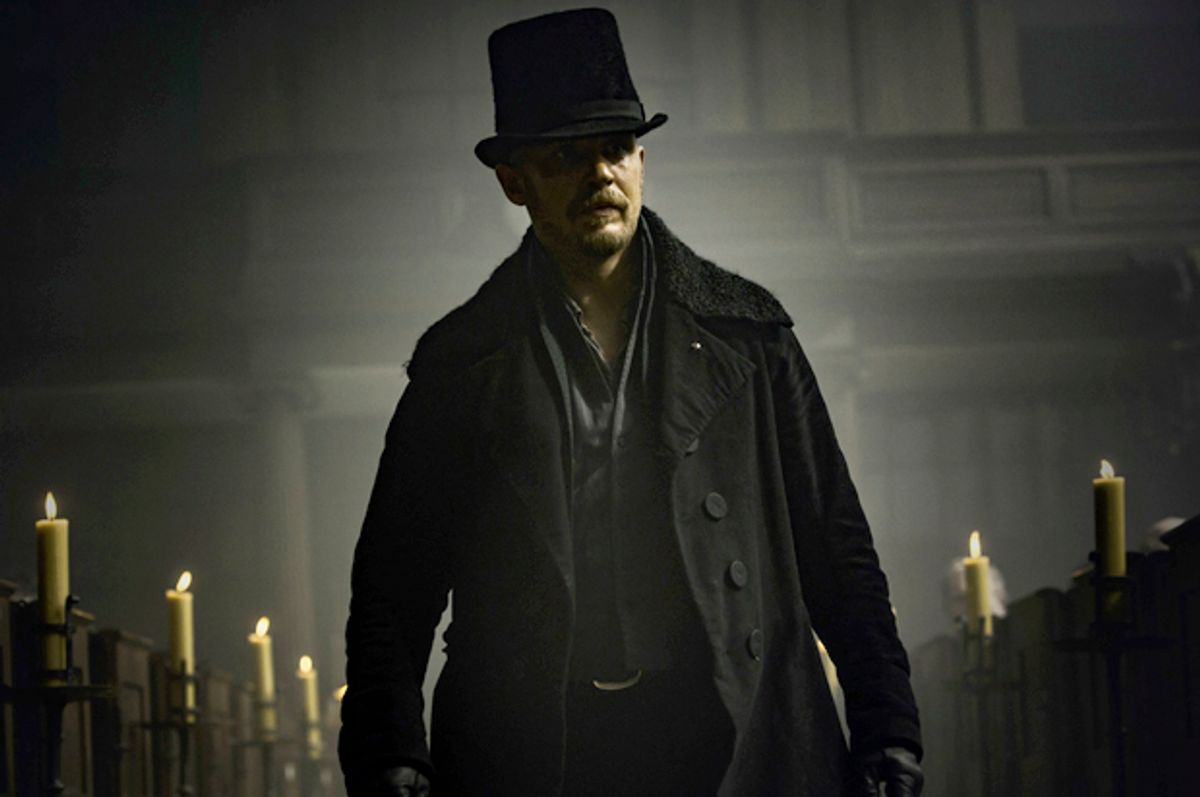 The London of “Taboo,” debuting at 10 p.m. on Tuesday on FX, is caked in mud. Grime powders the faces of prostitutes, blackens the fingernails of dockworkers and dulls the smiles of its waifs. Dirt glooms the clothing of the lower class, darkening the atmosphere inside the taverns, brothels and hovels of the less fortunate. The lives of the wealthy shine in contrast; they sit on shimmering brocaded upholstery, sipping tea from milk-colored cups and basking in light pouring in from clear windows.

Appearance is an indicator of worthiness in this 1814 Britain, making James Keziah Delaney (Tom Hardy) somewhat of a mystery. Throughout each episode he wears a long duster coat that billows ominously as he defiantly struts through streets and marble halls. His top hat slices the air like a shark’s fin. Even when he finds himself in the presence of rich men, he’s almost always smeared with some kind of filth.

Soon enough we come to understand that James uses muck as camouflage. The outwardly clean in his world lord their purity and uprightness over those stooped closely enough to the earth to be polluted by it, and this arrogance makes them vulnerable.

“Taboo,” a vanity piece executive produced by Hardy and the drama's creator Steven Knight, is a study in class divisiveness and the guerrilla tactics that could be used to wage war on the privileged. But it also could shape up to be a fable about how assumption and disparagement can be turned to the underdog’s advantage. The producers of “Taboo” seem to have aspired to explore a number of complex, uncomfortable issues in the three episodes made available to critics without concretely establishing a thesis about any of them. Provided the viewer isn’t utterly bored or bewildered by what she sees, the show thus far seems like it could go to interesting places. As to where that is exactly, who can say?

Hardy and Knight worked together in a more limited capacity on “Peaky Blinders,” another period drama that shatters the popular fantasy of Romantic-era London as a place of manicured, lavender-scented civility. But “Taboo” relies far more on Hardy’s charismatic brooding than a plot that progresses through this visceral landscape with a sense of structure and purpose.

Hardy previously played the role of Heathcliff in an ITV production of “Wuthering Heights,” and he carries himself with the same sense of danger and vulnerability as Emily Brontë’s hero possesses. He’s all hot glares and gravelly snarls, and that may be enough to mesmerize viewers for a time. Damn if he doesn’t make aimlessness look handsome.

James also has a feral quality that adds peril to his enigma. Presumed dead after a slave ship he was traveling on sinks, he resurfaces without warning at the funeral for his father, a disgraced and impoverished former shipping magnate. James is a man of few words, and the only information the viewer and schemers who have designs on his father’s estate have to go on is that James spent some years living in Africa.

Much as his return throws the plans of mighty men into upheaval, it sends his tense half-sister Zilpha (Oona Chaplin) into a long and piquant fit of the shivers — and not entirely out of fright. During a post-funeral gathering in a tavern, James corners Zilpha and purrs with no shortage of seductive menace, “One thing that Africa did not cure is that I still love you.”

Chaplin’s comportment is stiff and brittle next to that of Hardy, whose presence overpowers her in these opening episodes. Hardy's portrayal also overwhelms Franka Potente’s underwritten madam Helga, whose initial defining feature is wan desperation cloaked in confidence.

It’s almost a relief that other top-shelf performers in this series, including Jonathan Pryce and Mark Gatiss (hidden under layers of unfortunate prosthetics and detracting makeup as Britain’s Prince Regent) rarely share scenes with him, although a face-off between Pryce and Hardy in the premiere creates a delicious tension.

The specter of incest isn’t the only societal interdiction to which the title refers, but in the larger scheme of “Taboo” it may be the least problematic element of the story. James is half Native American; his mother was a Salish woman included in his father’s purchase of a piece of land along the Pacific Northwest coast called Nootka Sound.

Nootka Sound is a real place, and those familiar with its history know it was a site of strategic importance to several nations at that time. But the East India Company desires to persuade James that it’s worthless, as they nearly did to Zilpha before him.

Initially, London society views James as exotic at best, crudely savage at worst. His loathsome brother-in-law screams the N-word at him at every available opportunity and declares his desire to murder him. Aristocrats mistakenly believe him to be of low intelligence, possibly a cannibal. Soon enough they come to understand that he is not to be underestimated.

In its attempt to make a point about prejudices and the othering of outsiders, “Taboo” tumbles into the trap of perpetuating stereotypes about magical Negroes and mystical Indians. Hardy and Knight may argue that is the point: Linking other cultures with anti-Christian values makes them easier to dehumanize.

Some scenes seem to indicate this, with allusions to James as having shared a history with enslaved people that haunts him in some way. The men around him attempt to minimize his value by citing his bloodline or positing that his time spent among Africans has somehow coarsened his intellect and morals.

But the series itself dives into bewildering sojourns through memory — or is it fantasy? — showing tribespeople with painted faces and bizarre asides by James whispering in unfamiliar tongues to unseen forces. And when a viewer steps back and realizes that the target of loud, race-based vituperation is being played by one of the most popular white actors in the industry, all of this becomes even more questionable.

It could very well be that Knight and the Hardy are playing with these provocative signifiers about race and class to speak to a larger point later about a viewer's casual prejudices. A central element of the storyline involves a number of the players' bewilderment over James’ resourcefulness. His father allegedly died penniless, yet James always seems to have enough coin handy to pay debtors and buy favors. He knows secrets that only the most powerful are aware of; he can walk through a barren field and unearth bags of precious gems. If his face is grubby, that may be because he’s kept his ear to the ground. He has a game plan, even if “Taboo” does not seem to possess enough of one to make someone want to watch him play through to the finish.