Surviving President Trump: “This happened,” author Gene Stone says, “because not enough of us did something”

The writer behind the crisp, pragmatic "Trump Survival Guide" tells Salon about his blueprint for action, CODE B 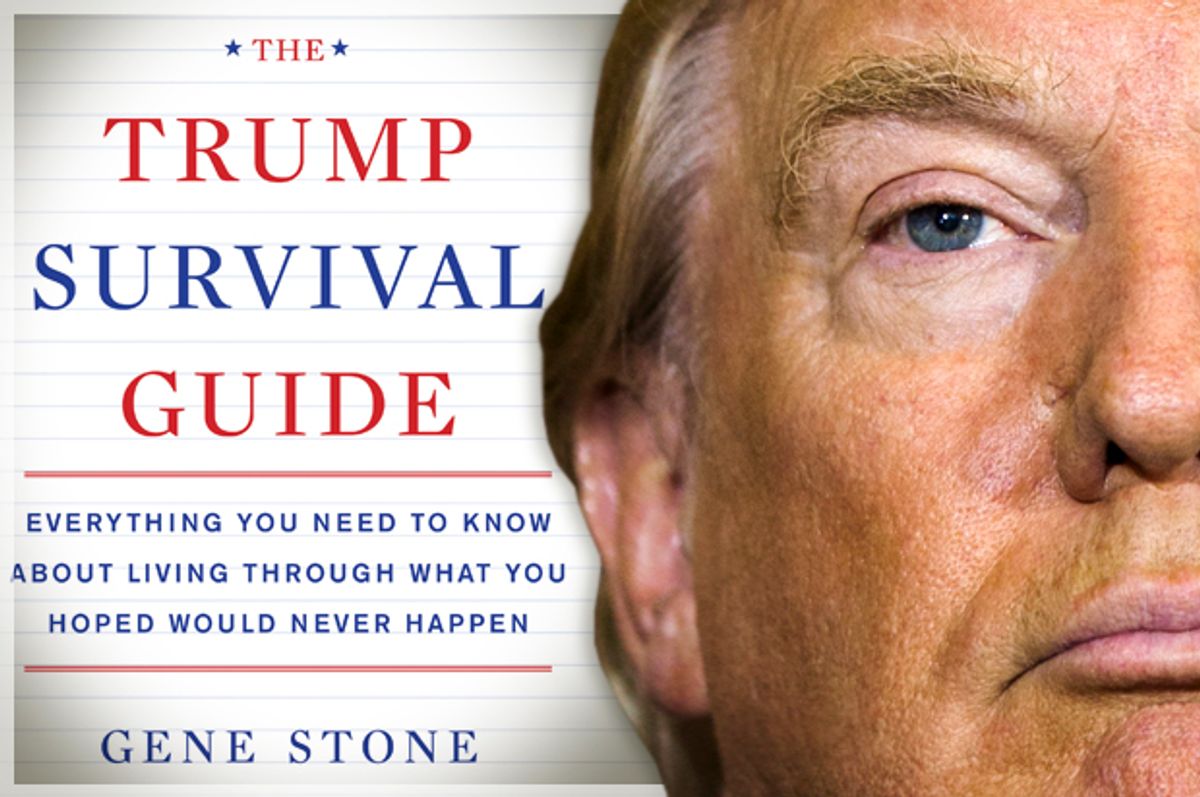 On Nov. 8, Gene Stone — a writer and editor in New York with pretty serious liberal politics — felt like a lot of blue-state Americans. He had been watching the election reports looking forward to a Hillary Clinton coronation. But by 9 p.m., as the projections began to point in a different direction, he became queasy. He couldn’t believe it was happening — but then it did.

He spent a week depressed and dejected: As a gay man, proud vegan, former Peace Corps volunteer and journalist of mostly Jewish descent, he was about as poor a match for the new regime as one could imagine. But when Stone uncoiled from fetal position, he decided that he was one of the rare people who could respond to the new reality in real time.

The result is “The Trump Survival Guide,” a new book  out this week that Stone wrote in a highly disciplined two-week frenzy and turned in to his publisher — William Morrow’s Dey Street Books — before the month of November was through.

Discussing the process by phone from his home in Lower Manhattan, Stone said he still feels a bit of disorientation and bitterness. “It’s like those Superman comics,” he said. “We’re entering Bizarro World.”

He knows enough about quantum physics to contemplate an alternate universe in which Trump had lost and people like him were wondering if Hillary could peel Elizabeth Warren away from the Senate for a Cabinet post and worrying whether Bill would embarrass his wife at official dinners.

But Stone did not want to give in to despair or paralysis. “This happened,” he said, “because not enough of us did something.”

The resulting book — which Stone put together in such haste only because he had friends who could help him write, copy edit, fact-check and research the thing — is crisp and pragmatic and not particularly analytic or deep. “I’m not the guy to do the in-depth reflection,” said Stone, who credits himself with being efficient and fast.

Part of what makes the book work — and made it reasonably easy to write in a hurry — is a simple structure of 12 chapters. Each one — “Civil Rights,” “The Economy,” “The Environment” — gives some background, describes how President Barack Obama handled things and explains what Trump might do and the kind of action a citizen could take. (Stone’s subtitle is “Everything You Need to Know About Living Through What You Hoped Would Never Happen.)

Each chapter concludes with recommended books like Naomi Klein’s “This Changes Everything,” Elizabeth Kolbert’s “The Sixth Extinction” and George Packer’s The Unwinding.”

Each issue has its own specific set of solutions. But the common denominator, Stone said, is a consistent list of activities for which he assigned the acronym CODE B.

“You need to call, organize, donate, educate and boycott,” he said. “What I mean by call — which is the most important of them — is calling your congressman or senator on the phone. Writing polite emails or letters to the editor is not as important. The Tea Party figured it out.”

The most chilling part of each chapter is Stone’s speculation about what the president-elect is likely to do. “I’m not an economist,” he conceded. “But the worst-case scenario is that we turn into an oligarchy.”