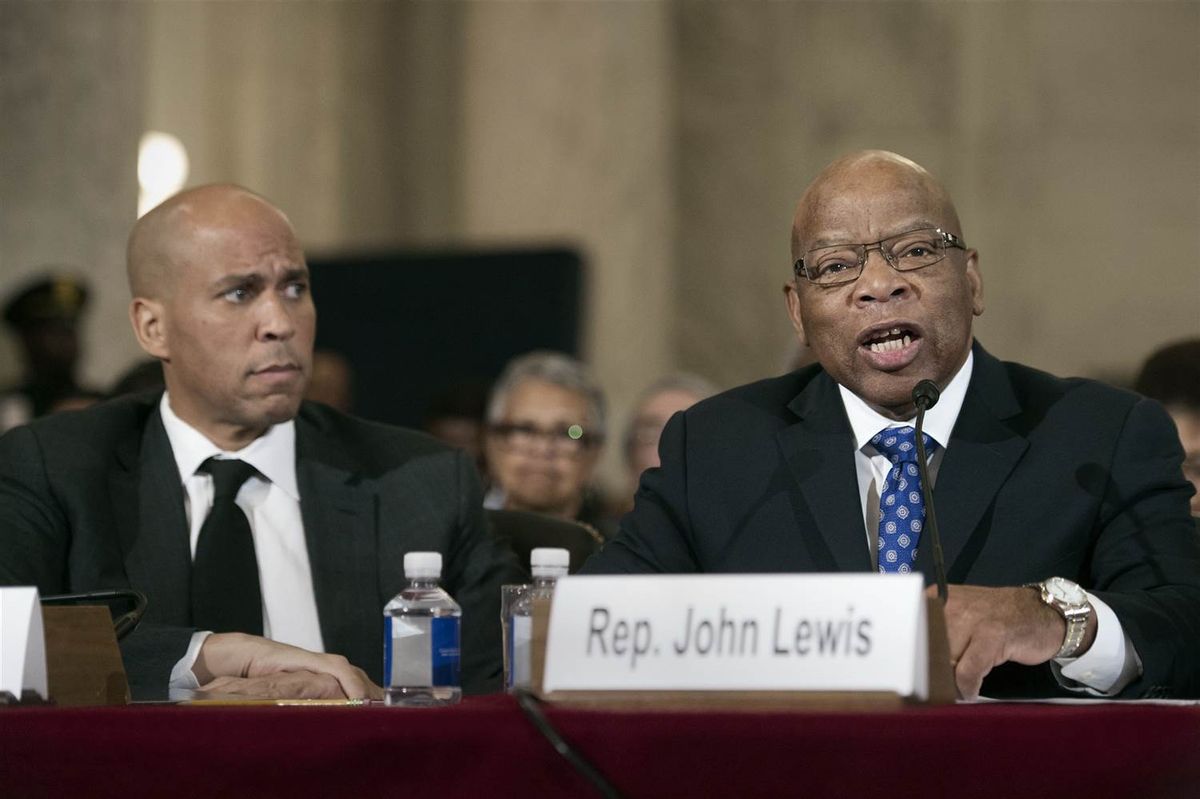 But as civil rights legend Rep. John Lewis, Congressional Black Caucus head Rep. Cedric Richmond and New Jersey Sen. Cory Booker testified that Sessions' confirmation to head the Department of Justice would set back the cause for universal civil rights, only one Republican on the committee remained to listen.

“I want to express my concerns about being made to testify at the very end of the witness panels," Louisiana Rep. Cedric Richmond said to applause from members of the Congressional Black Caucus seated behind him in the Russell Senate building. "To have a senator, a House member and a living civil rights legend testify at the end of all of this is the equivalent of being made to go to the back of the bus."

Richmond, the last witness in two days of testimony, noted that presence of several African-American congressmen who came to show their opposition to Sessions after Chairman Chuck Grassley, R-Iowa,  ignored them.

Chairman Grassley explained to Politico that the African-American congressmen were scheduled to testify last because other witnesses had requested to testify beforehand.

Richmond went on to implore the Democratic senators who remained for their colleagues' testimony to “be courageous or be complicit” about what Sessions would do as AG.

.@RepRichmond: Making senator, "civil rights legend" testify at end of hearing "equivalent of being made to go to the back of the bus." pic.twitter.com/rzm4hbVxGz

Opponents of Sessions' nomination shared the stage Wednesday with African-American supporters who offered testimony that Sessions hired them for work as lawyers and treated them professionally.

“It doesn’t matter how Senator Sessions may smile, how friendly he may be, how he may speak to you,” Georgia Rep. John Lewis heeded the Democratic senators who remained in the room. “We need someone who is going to stand up, to speak up, and speak out for the people that need help." He continued:

We can pretend the law is blind. We can pretend it is evenhanded. But if we are honest with ourselves we know we are called upon daily by the people we represent to help them deal with unfairness in how the law is written and enforced. Those who are committed to equal justice in our society wonder whether Senator Sessions’ calls for law and order will mean today what it meant it Alabama when I was coming up back then. The rule of law was used to violate the human and civil rights of the poor, the disposessed, people of color.

While Lewis' testimony was as passionately delivered as Rep. Richmond's fiery chastising of the Republicans on the committee, the more measured testimony of  Sen. Booker represented a historic precedent. No sitting senator has ever testified against another.

“I know it is exceptional for a senator to testify against another senator nominated for a Cabinet position,” Booker said. “But I believe, like perhaps all of my colleagues in the Senate, that in the choice between standing with Senate norms or standing up for what my conscience tells me is best for our country, I will always choose conscience and country.”

As the nation's top prosecutor, Sessions will be charged with enforcing federal civil rights laws that protect minority groups and women from discrimination and hate crimes, but he has repeatedly voted against such measures while in Congress:

Booker explained that the lawyer who helped his family desegregate his neighborhood in Newark was inspired by the work of Rep. Lewis and other civil rights activists who marched from Selma to Montogomery to fight for voting and civil rights. “I am literally sitting here because of people — marchers in Alabama and volunteer lawyers in New Jersey — who saw it as their affirmative duty to pursue justice,” he said.

“The march for justice in America still continues,” Booker testified.