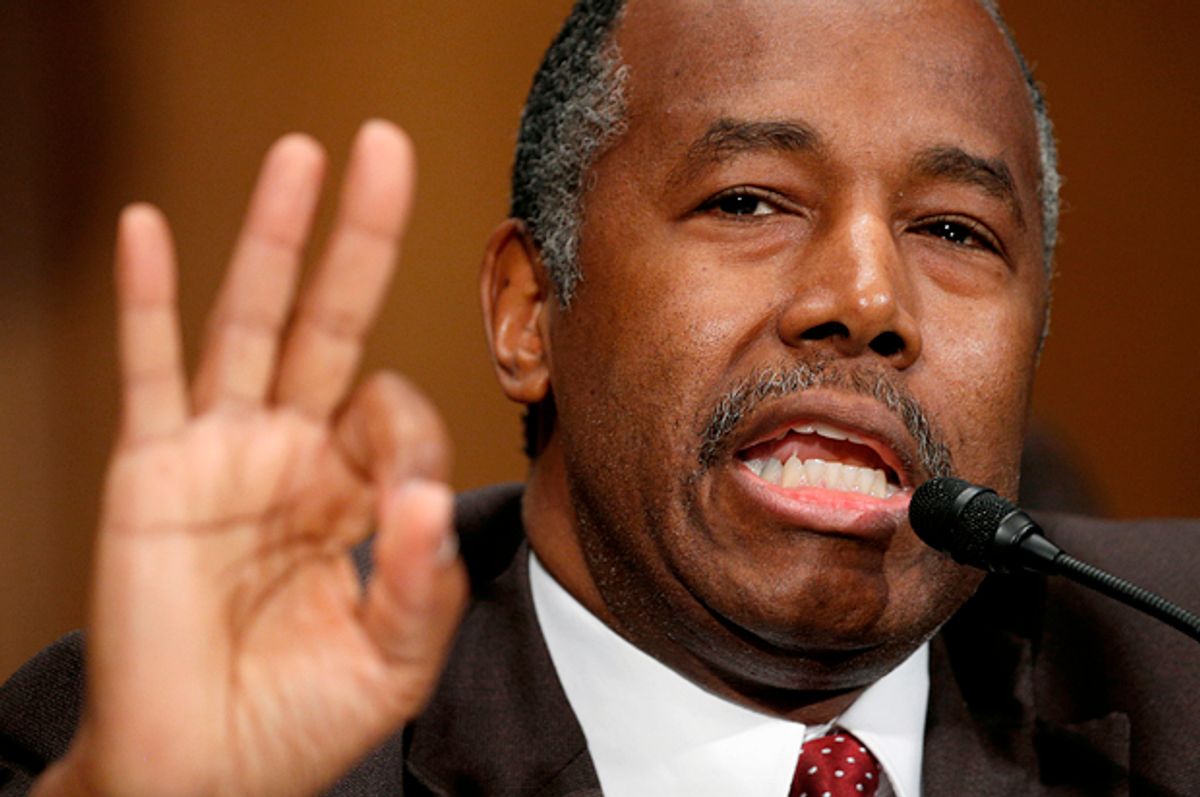 It’s no great stretch to say that retired neurosurgeon and scam presidential candidate Ben Carson is not qualified to run the Department of Housing and Urban Development. After all, Carson himself said as much.

“He's never run an agency and it's a lot to ask. He's a neophyte and that's not his strength,” Carson spokesman Armstrong Williams said in November, when President-elect Donald Trump first tried to offer him a Cabinet-level position. “Dr. Carson feels he has no government experience, he's never run a federal agency. The last thing he would want to do was take a position that could cripple the presidency.”

Carson apparently changed his mind, which led to Trump's nominating him to be HUD secretary. But the fact that Carson previously described himself as manifestly unqualified for the position shouldn’t be disregarded.

Even if Carson’s admission weren’t sufficient to establish his unsuitability for a Cabinet office, his long record of bizarre political statements would seem like enough to make the case. He’s criticized HUD rules related to housing desegregation, likening them to “failed socialist experiments.” Carson has said that the Muslim faith is not consistent with the Constitution, has pushed for federal investigations of public university professors who teach “propaganda,” and constantly references Hitler and the Nazis while attacking policies he disagrees with.

With all this evidence against his fitness for HUD secretary lying in great big piles everywhere you look, you might have assumed Carson’s nomination hearing before the Senate Banking Committee would be a contentious affair. But it was just the opposite: quiet, largely congenial and wildly uninformative.

Republicans went out of their way to not ask any difficult questions, and Democrats made only perfunctory attempts at pinning down Carson on his previous statements about HUD and stated desire to eliminate large chunks of the safety net. Carson, for his part, gave very little indication about how he’d actually administer this critical government agency, speaking in determinedly vague corporate speak about “opportunity,” taking a “holistic” approach to housing, and developing “synergies” with other agencies.

It all seemed rushed and pro forma, with senators from both parties treating Carson’s confirmation as a done deal.

That said, there were some truly surreal moments that emerged in Carson’s hearing, and they largely related to the president-elect. Part of the reason why HUD will be under intense scrutiny in the coming years is the fact that Trump and his family have a large financial stake in the housing and real estate markets.

Sen. Elizabeth Warren, D-Mass., was the first questioner to press Carson on this, noting that HUD is responsible for doling out “billions of dollars in grants and loans to help develop housing” and asking him if he could guarantee that “not a single taxpayer dollar that you give out will financially benefit the president-elect or his family.”

Carson fumbled around with his answer, at one point saying, “It will not be my intention to do anything to benefit any American.” Of course he meant that he wasn’t going to single out individual people for the agency’s largesse, but he stumbled over his words and fell prey to the gaffe patrol.

In fairness to Carson, it was somewhat of a trick question that Warren used to make her larger point. “The problem is that you can’t assure us that HUD money . . .  will not end up in the president-elect’s pockets,” she said. “And the reason you can’t assure [us] of that is because the president-elect is hiding his family’s business interests from you, from me, from the rest of America.”

This is obviously a huge problem and a potential wellspring for massive conflicts of interest and corrupt dealings. Ben Carson, who is being deposited right smack in the middle of this morass, seems thoroughly unprepared to deal with it.

Sen. Sherrod Brown of Ohio, the ranking Democrat on the committee, circled back to this issue later in the hearing, noting that Trump is invested “in at least one subsidized housing project,” and asked Carson if he’d discussed this with the president-elect. Carson said he had not. When Brown asked if Carson believed it was even possible for HUD to avoid “even the appearance of a conflict” on this matter, here’s how the HUD nominee responded: “What I would hope would happen with this committee is that we could come up with a suggestion that might be acceptable to all sides.”

Brown then asked Carson if he would “commit to report back [to the committee] on any issue that should arise on a property owned by Mr. Trump or his family, and any contact you or your subordinates receive from the Trump Organization or the White House or any other source other than the normal back and forth between a project and its oversight officials.” Carson said he “would be more than delighted to discuss those issues.”

Thus we had a senator and a Cabinet nominee working out a process — on the fly, and during a confirmation hearing — by which information regarding potential conflicts (or corruption) by the president or his family might perhaps be relayed to Congress. Responsibility for catching these conflicts will ultimately fall to Carson, who has previously communicated that he is not qualified to hold a Cabinet-level post and has yet to discuss these potential conflicts with the person who nominated him. As I say, it was a strange hearing.