Farewell, my black president: Barack Obama sounds a note of hope, and a note of warning 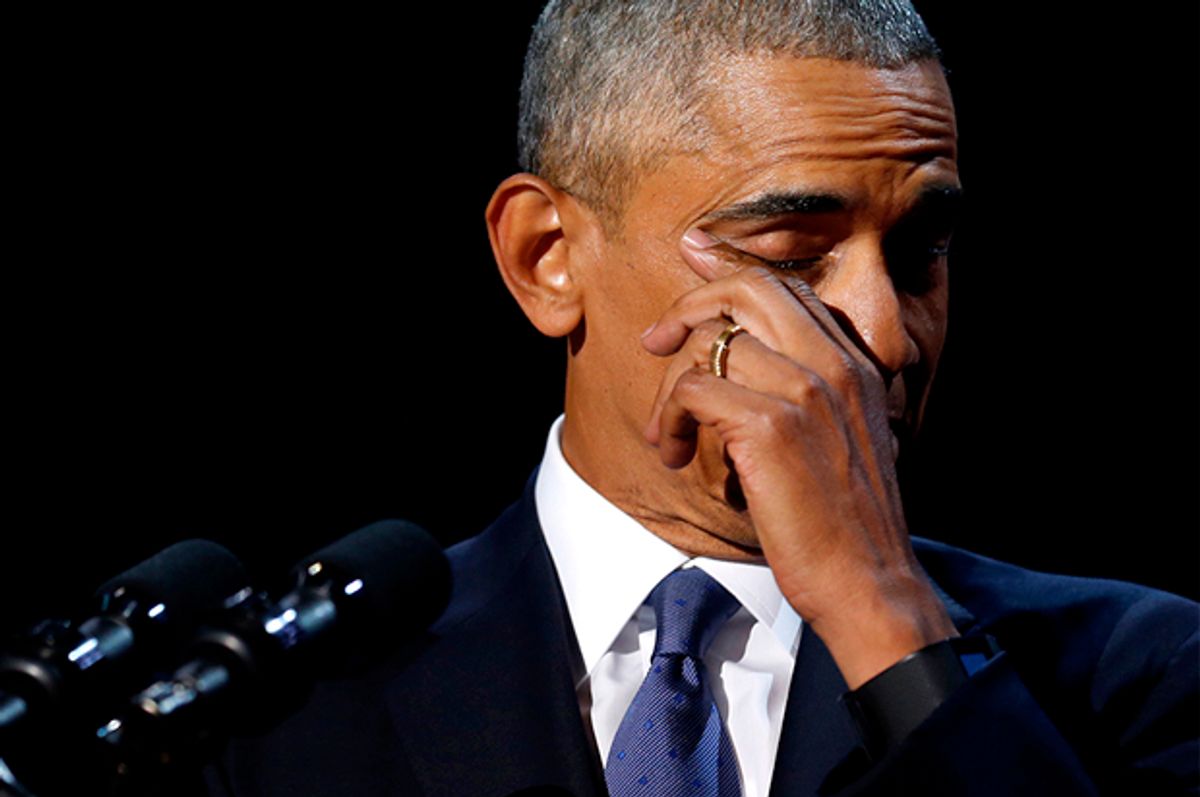 CHICAGO — Somewhere in another dimension of the multiverse, I hope that President Barack Obama returned home to Chicago to give his farewell address. As his music began, Obama walked up to the podium and paused. He looked to the crowd at the McCormick Center Place, arched his eyebrow, stared up at the lights in the ceiling and channeled professional wrestler and movie star Dwayne "The Rock" Johnson, bellowing, "Do you smell what Barack is cooking?"

Obama would then pause, letting the silence expand for a moment and then proclaim, "Finally, Barack has come . . . home."

During his farewell address last night, Obama was passionate while also restrained. Yet he wrapped the facts of American history in a soft but still durable glove and beat Trumpism and today's Republicans about the metaphorical face and body.

During his farewell address, the professor turned president of the United States lectured while never sounding arrogant, aloof or preachy. To that end, Obama was eloquent, intellectual and confident. He was a role model of calm, cool reflective black masculinity: a man utterly at home in his own skin and at peace with his legacy as president — even while being quite concerned about the future of the country under Donald Trump and the Republican regime.

Channeling George Washington, America's first and perhaps greatest president (a man who could have been a king or new type of American royalty if he so desired), Obama's farewell address outlined the need to nurture and protect the country's democratic institutions. He also implored the American people to value diversity, cosmopolitanism, inclusion and equality as a means of further unleashing the human capital and potential of our multiracial democracy.

In a little noticed move, Obama also channeled the principles of the Enlightenment (which helped birth the founding of our republic and the U.S. Constitution) to highlight how science and rational thought are to be embraced and not abandoned in an era of "fake news," as exemplified by Fox News and the broader right-wing news entertainment media.

President Obama also did not run away from the realities of race, class and the color line. As a student of American history, President Obama directly explained the long con game whereby racism and white racial resentment have been used by (white) elites to create a state of suspicion and hostility between black, brown and white working-class people. Ultimately, President Obama mustered the best version of the American creed — a highly idealized version — to deliver a blistering takedown of Trump and the revanchism, bigotry, nativism and racism that he and his movement represent.

It was a moving and beautiful thing to witness, as I did on Tuesday evening.

Unfortunately, the targets of Obama's critical interventions are utterly incapable of feeling either shame or embarrassment. This is one of the greatest strengths (and also greatest weaknesses) of demagogues and scoundrels. It has enabled Republicans and their allies to turn President Obama's inherent belief in fairness, bipartisanship and human decency against him.

As I watched President Obama's speech from the press area, I wondered how history would remember him.

He will certainly be evaluated according to the standard measures applied to all presidents. Did he handle crises well? How is the economy? Did he improve on the conditions left by his predecessor? Is the country at peace? What is the national mood?

On most of these measures, Obama has performed admirably and under extremely harsh and difficult circumstances as he faced an uncooperative and radical opposition that demonstrated little to no regard for standing principles of good governance or consensus politics.

What of Obama's special role in history and responsibility to black folks as the United States' first black president?

The answer here is mixed and complicated.

Barack Obama has pursued a color-blind "all boats float" approach to the particular challenges facing the black community in America. On some measures, such as access to health care, his policies have been a net positive for all Americans — including blacks. Unfortunately, relative to whites and other groups, black Americans have seen much less improvement in areas such as wealth and income inequality, unemployment, poverty and police brutality.

Obama's tenure as an extremely popular twice-elected president has been a triumph of symbolic politics. The reality of a black president and black first lady is a direct affront to the old, ugly and all-too-common belief that to be a "real American" means to be "white." The importance and power of the Obamas' actions in the White House — in terms of their effect on arts and culture; their embrace of the full diversity and range of what it means to be "American" and their roles as national cheerleaders, de facto royalty and representatives of the country's national spirit around the world —cannot be underestimated.

Obama's enemies understood the symbolic power of a black man and his family quite well: For eight years, the Republican Party has used white racial resentment, overt racism, ethnocentrism and bigotry against the very idea of a black president to obstruct normal functions of government. Trump ultimately deployed those forces to win the 2016 presidential election.

We truly do stand on the shoulders of our ancestors. This is especially the case for black and brown folks in America and elsewhere, as well as marginalized groups more generally. How would those black folks who maintained their dignity under slavery and then survived Jim and Jane Crow and defeated American apartheid, and whose descendants are still fighting institutional white supremacy and color-blind racism, assess this first black president?

There is no simple answer. History is still being written. Evaluating the global color line and the struggles along it are a process, not an easily (if ever) reached destination and conclusion.

Nevertheless, I would like to imagine that the black human property and other freedom fighters who brought down legal white supremacy in America and in many other parts of the world would look at Obama and smile. I would hope that the black men called "George" — the individuals made into an anonymous mass for the white gaze as they served white travelers as Pullman car porters — might feel some satisfaction in seeing a black man as president of the United States.

Likewise, the washerwomen and maids who for decades worked in white folks' homes under threat of sexual assault, violation and exploitation so that they could take care of their own black families, communities and other kin are the mothers of the black freedom struggle. I hope that they see Obama (and his immediate family in Michelle, Malia and Sasha) as their own.

Obama is also the direct descendant of the black professional classes and other strivers who were often the first to do their jobs in all-white spaces and understood that there was no margin for failure. Black folks have always known that we have had to be at least twice as good to get half as far as whites in the same position — regardless of how much more qualified and talented we may be.

As I stood in the security screening line earlier, I decided that after Obama's farewell address I would go to Michigan Avenue, buy a 34-ounce can of Asahi beer, put it in a brown paper bag and then stand across from Trump Tower. As I took deep sips of my favorite beer I would then look up at that testament to ego and narcissism and proceed to curse Donald Trump — for all the wickedness, damage and insult he has already done and will certainly do to America, her citizens and the world.

But after listening to Obama's farewell address, I decided to not do those things, for that would be to against the spirit, wisdom and guidance that the president had offered the American people in his final address. Now is the time to reflect, organize and decide how best to resist in the age of Donald Trump. It is not a time to rage blindly or with futility.

What comes next I do not know. But it is abundantly clear that as Barack Obama departs, and his successor who is (as I have argued repeatedly) a fascist authoritarian takes the reins of state, we the American people are truly through a glass darkly. Obama told us that the answers lie in ourselves and also with one another: "Yes, we can!" I hope that he was right. I worry that he was wrong.