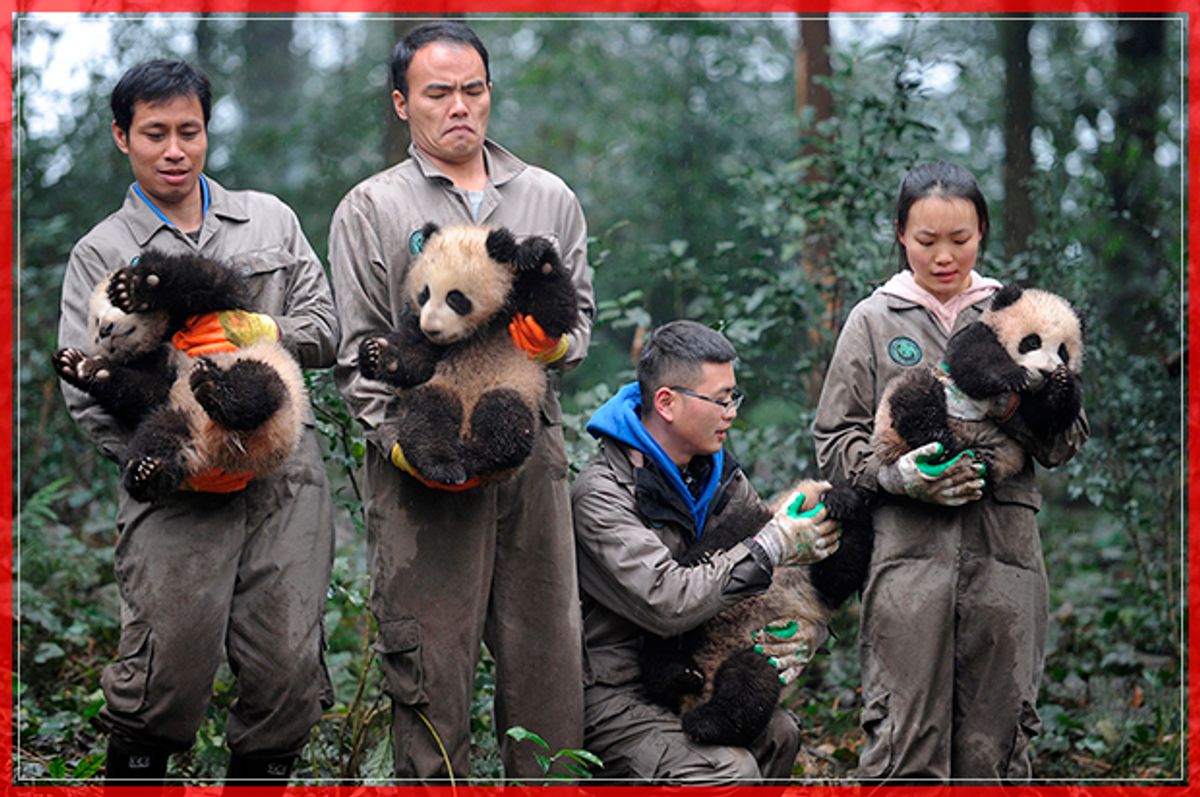 Researchers hold giant panda cubs during an event to celebrate China's Lunar New Year in a research base in Ya'an, Sichuan province, China January 11, 2017. China Daily via REUTERS ATTENTION EDITORS - THIS PICTURE WAS PROVIDED BY A THIRD PARTY. CHINA OUT. NO COMMERCIAL OR EDITORIAL SALES IN CHINA - RTX2YG73 (Reuters)
-- I can't imagine uprooting and moving to a brand new area. I also can't imagine if the climate is completely different from what you're used to. New culture, new climate and nothing to keep you grounded. Nobody throws a techno party like the Germans! Who wouldn't want to rave all night at the... Wait! This is the brand new Elbphilharmonie building, home of the Hamburg Philharmonic Orchestra! Who says classical can't be iconoclastic?

Hyderabad, India   Getty/AFP
A passenger climbs into a train at the Secunderabad Railway Station When it's harvest time, it's time to party in Hyderabad, India. Locals hop a train home in time for the annual Makar Sankranti festival, also known as "Sankranti". The seasonal agriculture and religious holiday, which runs January 12 - 14, marks the transition of the sun into the zodiac sign of Makara (Capricorn) on its celestial path. All over India, people are celebrating, as the sun transitions to longer days with more light. For those who want evidence that every job, no matter how glamorous it may look from the outside, has parts of it that suck, I give you this picture of three researchers trying to wrangle panda cubs in the Sichuan province of China. The cubs are being prepped for some New Year's festivities that involve spectators watching the cubs play with toys, because, let's face it, nothing is more entertaining than that.

But while herding pandas all day sounds like my version of a dream job, one look at these researchers faces tells a different story: It's muddy and wet, and as cute as these pandas are, they are still messy and probably smelly. There's a moral to this story, and that moral is everyone's job sucks, at least some of the time. Even the ones involving pandas.