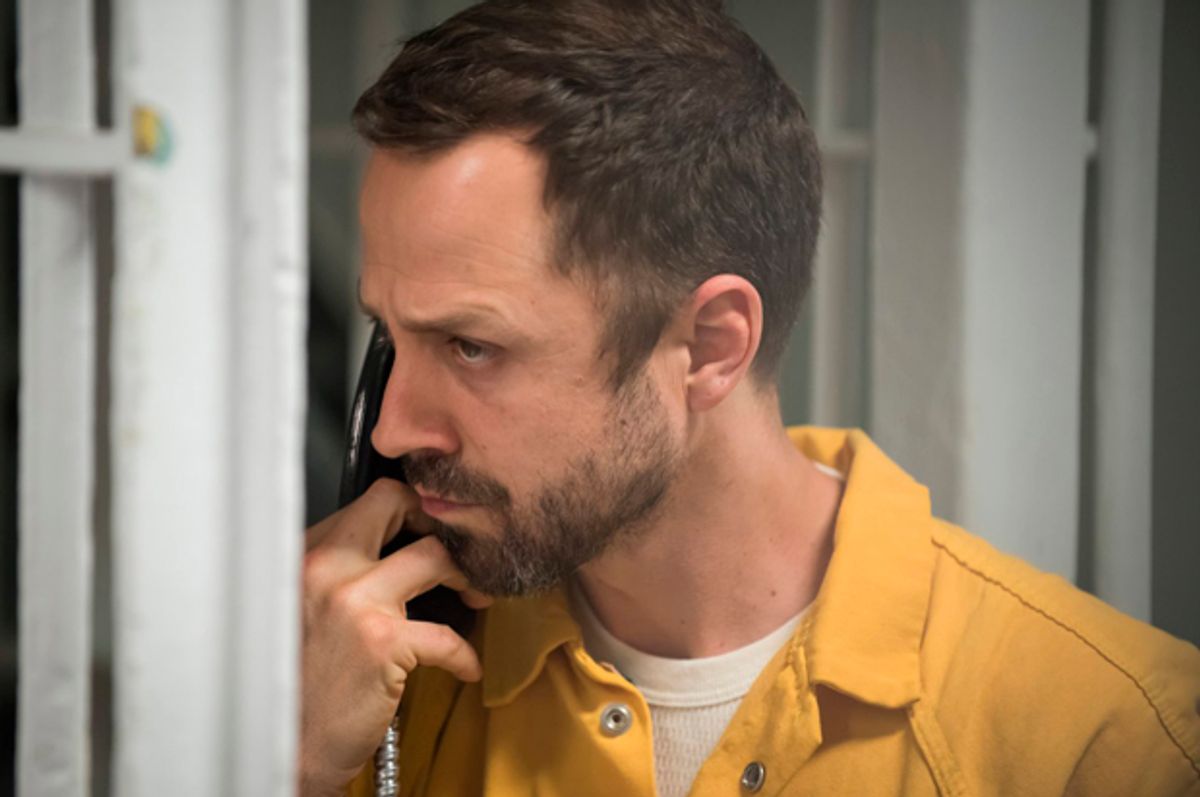 The question of identity spins at the core of Amazon’s “Sneaky Pete,” a concept that applies to the main character and the series itself. Midway through the first episode it becomes apparent that the show could have taken any number of creative directions and looked very differently than it does today.

One can envision a universe in which “Sneaky Pete” became a light procedural. Had it been picked up by CBS, which originally commissioned it, that might have happened. But the network passed on it.

The rest of the hour hums with the rhythms and personality of a high-concept series that, once the story gets rolling in the second and third episodes, could have fit into any number of cable schedules.

Eventually Amazon landed it, which is fortunate because the streaming service needs an addictive hour-long show that begs to be binged. And “Sneaky Pete,” which debuts Friday on Amazon Prime, is a series made for devouring. As good as the premiere is, the next episode is better. The promises made in the second episode are delivered and expanded upon in the third. This is a show populated with enjoyable characters that spins a familiar conceit, the crime drama, in a way that feels bright and original.

Whether the “Sneaky Pete” that Amazon Prime subscribers will see on Friday is the same show its creators David Shore (of “House” fame) and Bryan Cranston originally envisioned is, for the moment, unimportant. All series undergo their share of tweaks, especially those that experience a changing of the guard behind the scenes. Shore left the production last spring and Graham Yost (“Justified”) stepped in as its showrunner.

What matters is that “Sneaky Pete” distinguishes itself with an involving, efficiently paced pilot and a story with a depth and complexity that evolves as the series progresses without sacrificing any of the first episode’s levity.

The adroitness of “Sneaky Pete” is anchored by its title character, played by Giovanni Ribisi, who is not actually named Pete. His real name is Marius, and he’s a con artist on the verge of being released from prison.

Before that happens, Marius discovers that he can’t go home again — literally. In need of a place to lay low, Marius hatches a plan to slip into the life of his cellmate Pete, a yappy simpleton full of tales about idyllic summers spent at his grandparents’ Connecticut farm. “Sneaky Pete” asks a great deal of viewers in proposing that they embrace this sketchy premise, but the writers plausibly establish that Marius is incredibly charming, skilled and, most important, prone to overreach.

Besides, Pete is conveniently estranged from his extended family, the Bernhardts. No one in the clan has laid eyes on him in 20 years. When Marius shows up at the door of Grandma Audrey (Margo Martindale) and Grandpa Otto (Peter Gerety) claiming to be Pete, they welcome him inside.

The comedic shades that Ribisi lends to Marius incentivize viewers’ mild suspension of belief from the moment they meet him. As a scam artist, he is hardened, cynical and slightly pitiable. But his swindler’s version of Pete has whiffs of gentle pathos; he is kindly, helpful and submissive. Ribisi sells this mask by screwing his face into a mild wince that emerges whether he’s being observed or not. Then again, some of that expression is born out of genuine envy. Marius’ upbringing was vastly different from that of Pete, and the problems he’s hiding from are weighty.

A person would be hard-pressed to find a weak link within the “Sneaky Pete” cast, honestly. Martindale’s prodigious range received a workout in “Justified” and “The Americans.” In “Sneaky Pete,” Yost and the producers ask her to explore Audrey’s thinly veiled mistrust by blending subtlety with maternal gruffness. Pairing Martindale with Gerety is a masterstroke of matching exceptional talent, and he meets the actress’ matriarchal gruffness with a good-natured crankiness that belies an air of sadness and frustration.

Cranston’s association with “Sneaky Pete” is bound to attract “Breaking Bad” fans hungry to see how the actor’s new project compares to his iconic AMC series. He has a minor role here as an underworld boss who figures in Marius’ past and current troubles and shows up just enough to remind viewers of the threat nipping at Marius’ heels. But Cranston’s presence here is sparse, as if he were aware that too much screen time would overshadow the work of other players. And if that’s a conscious choice, it’s also wise and charitable.

Much as we’d love to see Cranston, Ribisi, Martindale and Gerety square off every week — it’s due to happen at least once, no doubt — making those interactions a staple would bleed attention away from the fine work Marin Ireland does in playing Pete’s underappreciated cousin Julia, a single mother struggling to keep the family’s bail bonds business afloat.

Michael Drayer gets less screen time as Marius’s screwup of a brother Eddie, but he has a fine time with a role careening toward an ignominious end. Shane McRae, meanwhile, is equally comical and irritating as Julia’s brother Taylor, a man-child who can’t let go of childhood memories of pranks he committed with and pulled upon the man he thinks is his cousin Pete. Marius doesn’t appreciate Taylor’s physical teasing but tolerates it to stay on Taylor’s good side. That’s because Pete’s cousin is a cop.

The same twist informed the tension in Cranston’s previous series, but its deployment in “Sneaky Pete” doesn’t feel derivative. Rather, it adds to Marius’ realization that he’s in a little too deep yet again — his fatal flaw and the story’s big tease.

Marius’s flimsy, precarious plan could fall apart the moment that he flubs one detail in a sturdy line of questioning, so that his past life could catch up with him in ways he can’t predict. But that’s the source of the thrill, isn’t it? As each character moves his or her story across this show's map, another road opens, another escape hatch reveals itself and Marius-Pete pushes this buoyant adventure just a little further along.

Tumbling along with “Sneaky Pete” is easy and rewarding, and you may desire to remain with these characters for a long time, delaying the inevitable arrival at the finale for as long as possible. Good luck with that.