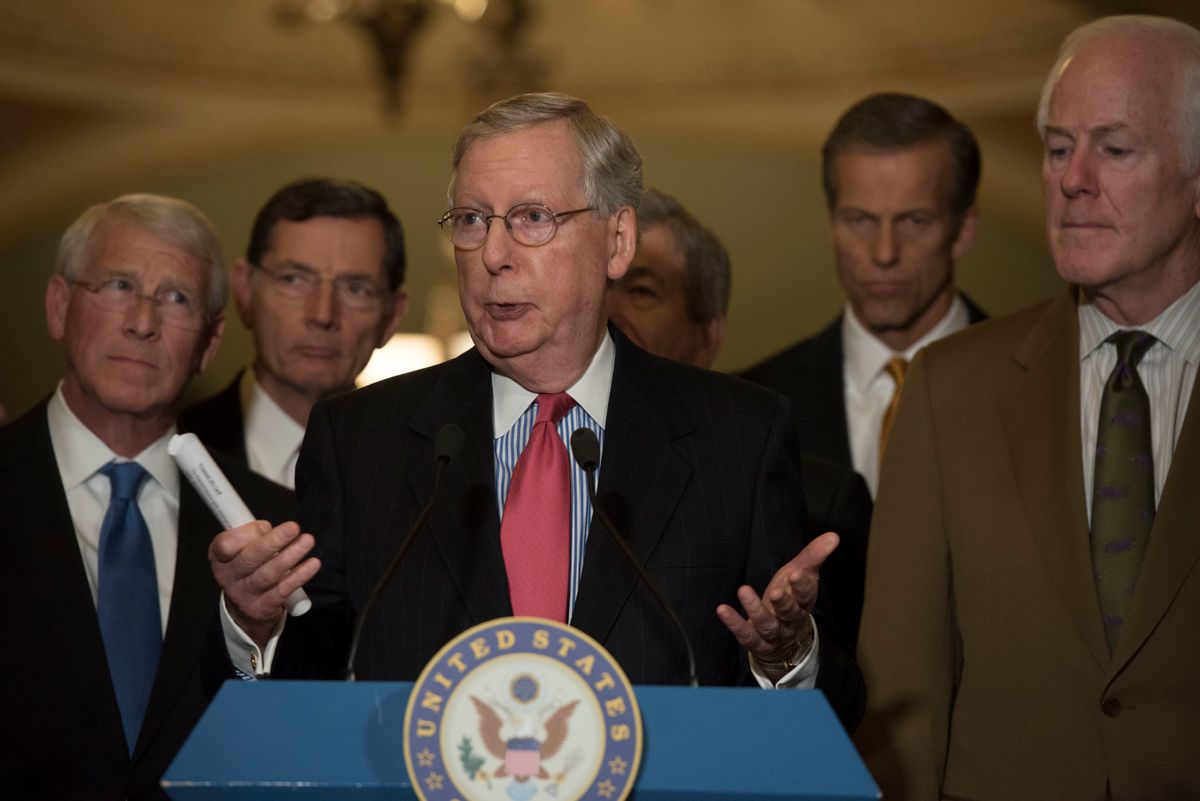 The Senate early has passed a measure to take the first step forward on dismantling President Barack Obama's health care law, responding to pressure to move quickly even as Republicans and President-elect Trump grapple with what to replace it with.

The nearly party-line 51-48 vote early Thursday came on a nonbinding Republican-backed budget measure that eases the way for action on subsequent repeal legislation as soon as next month.

The House is slated to vote on the measure on Friday, though some Republicans there have misgivings about setting the repeal effort in motion without a better idea of the replacement plan.

Trump oozed confidence at a news conference on Tuesday, promising his incoming administration would soon reveal a plan to both repeal so-called Obamacare and replace it with legislation to "get health care taken care of in this country."

"We're going to do repeal and replace, very complicated stuff," Trump told reporters, adding that both elements would pass virtually at the same time. That promise, however, will be almost impossible to achieve in the complicated web of Congress, where GOP leaders must navigate complex Senate rules, united Democratic opposition and substantive policy disagreements among Republicans.

Passage of Thursday's measure would permit follow-up legislation to escape the threat of a filibuster by Senate Democrats. Republicans are not close to agreement among themselves on what any "Obamacare" replacement would look like, however.

Republicans plan to get legislation voiding Obama's law and replacing parts of it to Trump by the end of February, House Majority Leader Kevin McCarthy, R-Calif., said Wednesday on "The Hugh Hewitt Show," a conservative radio program. Other Republicans have said they expect the process to take longer.

The 2010 law extended health insurance to some 20 million Americans, prevented insurers from denying coverage for pre-existing conditions and steered billions of dollars to states for the Medicaid health program for the poor. Republicans fought the effort tooth and nail and voter opposition to Obamacare helped carry the party to impressive wins in 2010, 2014, and last year.

Thursday's Senate procedural vote will set up special budget rules that will allow the repeal vote to take place with a simple majority in the 100-member Senate, instead of the 60 votes required to move most legislation.

That means Republicans, who control 52 seats, can push through repeal legislation without Democratic cooperation. They're also discussing whether there are some elements of a replacement bill that could get through at the same time with a simple majority. But for many elements of a new health care law, Republicans are likely to need 60 votes and Democratic support, and at this point the two parties aren't even talking.

Increasing numbers of Republicans have expressed anxiety over obliterating the law without a replacement to show voters.

Sen. Susan Collins, R-Maine, said she wants to at least see "a detailed framework" of a GOP alternative health care plan before voting on repeal. She said Republicans would risk "people falling through the cracks or causing turmoil in insurance markets" if lawmakers voided Obama's statute without a replacement in hand.

Collins was among a handful of Republicans to occasionally break ranks to support some Democratic messaging amendments aimed at supporting such things as rural hospitals and a mandate to cover patients with pre-existing medical conditions. They were all shot down by majority Republicans anyway.

House leaders planned a Friday vote on the budget, though Republicans in that chamber also had misgivings.

Many members of the conservative House Freedom Caucus were insisting on first learning details about what a GOP substitute would look like — or putting some elements of the replacement measure in the repeal bill.

"We need to be voting for a replacement plan at the same time that we vote for repeal," said Rep. Mark Meadows, R-N.C., an influential conservative.

Some GOP senators have discussed a phase-in of three years or longer to give lawmakers more time to replace Obama's overhaul and make sure people now covered by that law can adjust to a new program.

Some more moderate House Republicans were unhappy, too, including Rep. Tom MacArthur, R-N.J., a leader of GOP centrists in the House Tuesday Group. He said he would oppose the budget because there was too little information about the replacement, including whether people receiving expanded Medicaid coverage or health care subsidies under the existing law would be protected.

"We're loading a gun here," MacArthur said. "I want to know where it's pointed before we start the process."

VIDEO: Here is how the Democrats' vote-a-rama rules protest of repeal effort unfolded on Senate floor after 1am pic.twitter.com/r34Gyempeo