A surprisingly tough day for the former ExxonMobil CEO: on climate, China, Russia and more, a lot of dodging 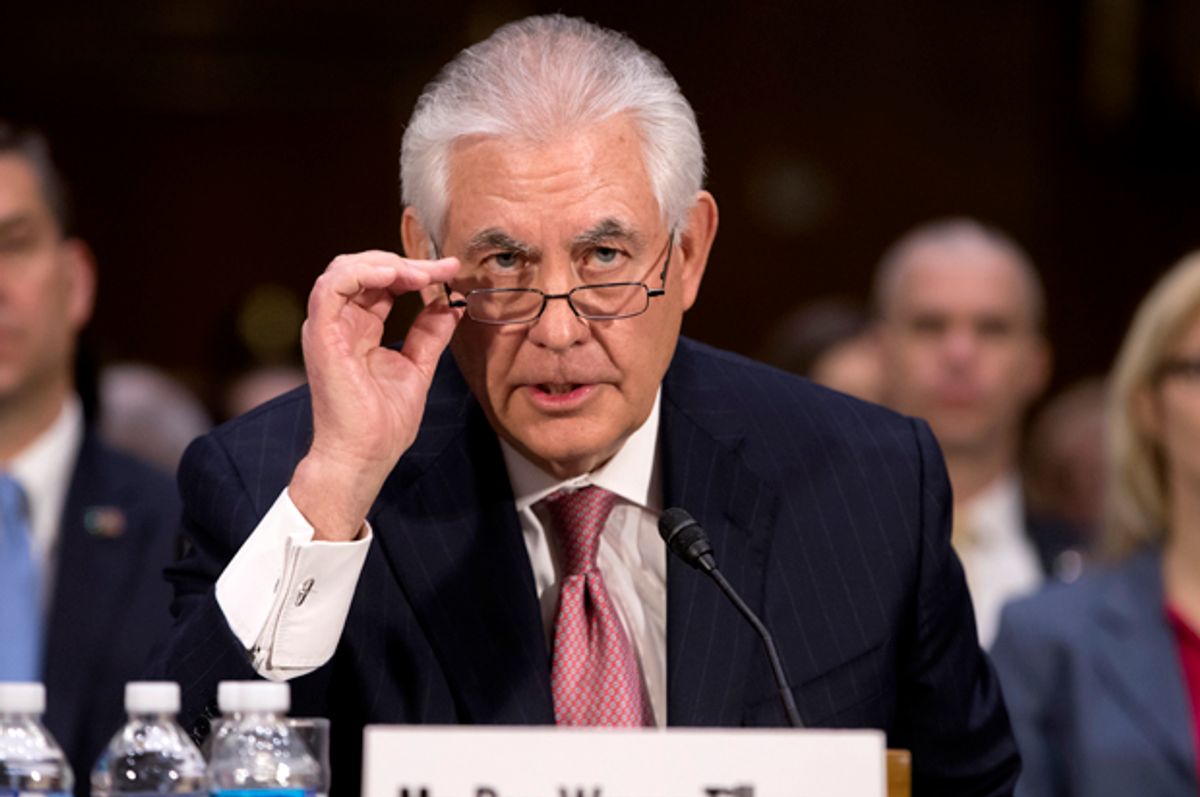 On Wednesday morning Donald Trump held his first press conference since July. It was immediately clear this was not going to be the day he executed the long-awaited pivot to presidential behavior. It was a crazy event held in the lobby of Trump Tower, featuring cheering Trump Organization staffers in the crowd treating it like a Trump Victory rally.

The president-elect announced that he was not going to divest assets from his business and explained that because he is a "germophobe" he could not possibly be the subject of blackmail — or at least not on the basis of the allegations in Tuesday's bombshell report. And that was before he started screaming at reporters.

Trump never answered the direct question about whether anyone associated with his campaign had been in contact with representatives of the Russian government, but he did admit for the first time that Russia apparently hacked his opponent's presidential campaign. He thinks it was worth it. He said, "If Putin likes Donald Trump, I consider that an asset, not a liability," apparently perceiving the Russian president as just another enthusiastic Trump voter who wants to make America great again.

After watching that astonishing display, it was a relief to turn to Secretary of State-nominee Rex Tillerson's confirmation hearings on Capitol Hill. At least that wouldn't make you contemplate running out and buying survivalist gear, right?  Well, that depends.

Your first impression of the man explains why Trump cast him in the role. (And yes, he did "cast" him.) With his  craggy face and silvery mane swept back off his forehead, Tillerson looks like he should be etched on money. When he opens his mouth and speaks in that familiar Texas drawl, you feel like you've been hurled back in time to an era when Republicans were led by people like James Baker and Phil Gramm and, yes, George W. Bush (which brings on its own set of misgivings).

Tillerson is a smooth operator, but he nonetheless had a surprisingly bumpy ride. He was questioned sharply about whether he planned to release his tax returns. He said he would give the committee some financial information but did not plan to reveal his returns despite his very recent departure as CEO of ExxonMobil. Indeed, why should he? The president-elect himself, his new boss, refuses to release his and isn't divesting his holdings because, according to his lawyer, "selling his assets without the rights to the brand would greatly diminish the value of the assets." If the president can get away with maintaining ownership in an international business because he'd lose money if he sold it, what's the problem with a multimillion-dollar golden parachute from ExxonMobil?

Sen. Tim Kaine, who very nearly became vice president, got under Tillerson's skin by asking him about the longstanding accusations that ExxonMobil funded and disseminated climate-denial propaganda for years with the intention of misleading he public. The former CEO bobbed and weaved, prompting Kaine to ask, "Do you lack the knowledge to answer my question or are you refusing to answer my question?" To which Tillerson tartly replied, "A little of both."

The good news is that Tillerson didn't call climate change a Chinese hoax, as his new boss has done. He even suggested that the U.S. might not pull out of the Paris accords since it's important to have a seat at the table. Which was mighty big of him considering that the U.S. emits the second-highest level of greenhouse gases on the planet.

Tillerson received an unexpected grilling from Sen. Marco Rubio, a onetime Trump foe, on the issue of sanctions against Russia and whether he would characterize Vladimir Putin as a war criminal. Tillerson danced around the first issue and said no to the second. It seemed a bit much to ask a man who's applying to be the nation's top diplomat to call the Russian president a war criminal, so that's fair enough. But it's clear that the issue of sanctions is a dicey one for both Trump and Tillerson.

There have been questions about the Trump campaign's changing the GOP platform's position on Russian sanctions during the Republican convention. And Tillerson's answers on whether ExxonMobil lobbied against the sanctions seem to have been downright deceptive. He claimed the company didn't do it, and then said it had just offered information, an assertion refuted by Sen. Bob Menendez, D-N.J. When Tillerson said he personally hadn't lobbied anyone, even a friendly Sen. Bob Corker, R-Tenn., piped up to remind him that he had in fact called Corker about the issue.

The reason for all the questioning, of course, is that Tillerson had just made the deal of his life for ExxonMobil to drill in the Russian Arctic when sanctions were inconveniently imposed following Russia's annexation of Crimea. The question leads back to Tillerson's remaining financial interests in the company, which might reveal a personal stake regarding the lifting of those sanctions. But again, this is the ethics-free Trump administration and Tillerson's potential conflicts seem as quaint as a nominee's being rejected for failing to pay her nanny's Social Security tax (as happened under the administration of President Bill Clinton). So it's unlikely to derail him.

Tillerson did make some news in the hearing at the end of the day when he blithely endorsed one of Trump's most fatuous campaign lines. He said the building of islands in the South China Sea is "akin to Russia's taking Crimea," which is ridiculous and will likely upset Beijing all over again. Sounding like his bombastic new boss, Tillerson added, "We're going to have to send China a clear signal that first, the island building stops, and second, your access to those islands also is not going to be allowed." There's no word on what comes next but I think we get the picture.

While everyone seemed to believe that Trump was only talking about trade deals when he railed against China during the campaign, he also constantly brought up these islands as if they were a deliberate provocation against the U.S. Tillerson seemed all too eager to sign on to that proposition. On the other hand, he said he is a proponent of the Trans-Pacific Partnership trade deal, while opposition to it was supposedly central to Trump's appeal to his white working-class supporters. I always wondered if they were actually more attracted to the old-fashioned saber rattling. Looks like we might be about to find out.