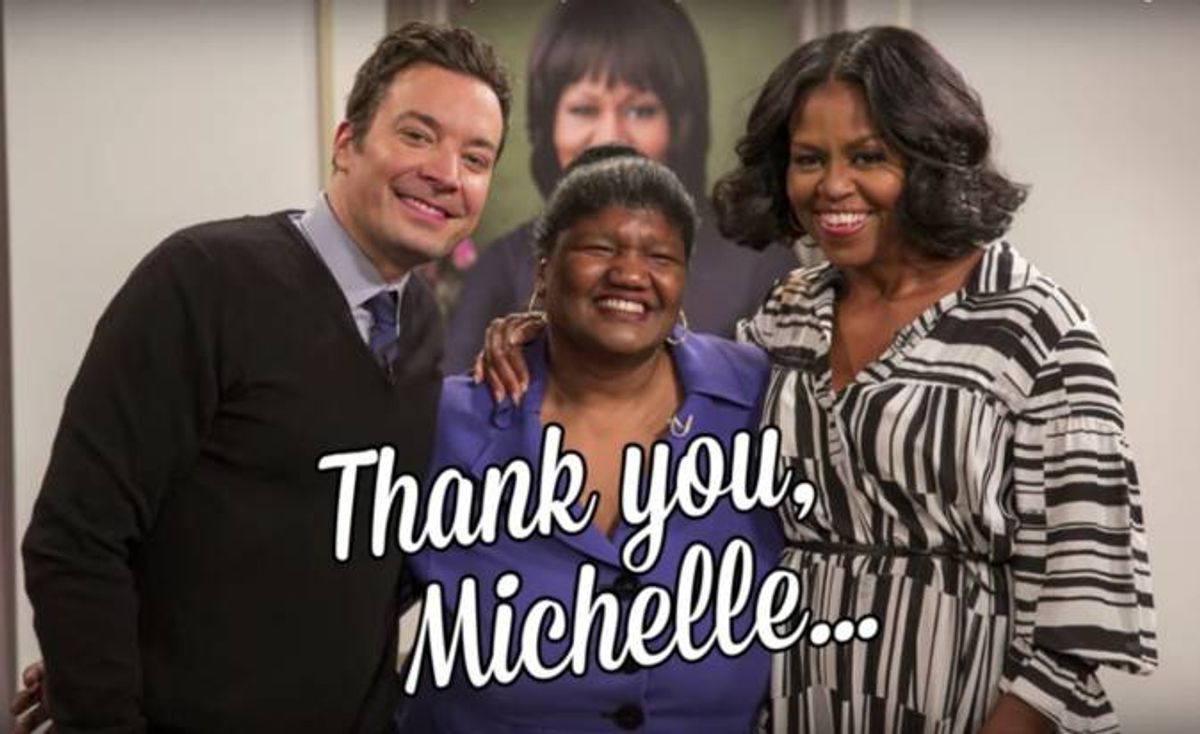 Obama revealed to Fallon that the final days of her husband's presidency has “been surprisingly emotional for all of us in ways that we didn’t expect.”

“I didn’t think it was going to be that emotional,” she admitted to Fallon.

Describing her emotions at the president's farewell address in Chicago Tuesday, Obama said, “I lost it at home ... Malia was crying. Sasha she wasn’t there.” ("She had a final," Michelle revealed with a shrug. "You know the Obamas, girl. Sorry. You take your test. You can say goodbye later.")

"You kept it together, but I lost it," Fallon told Obama. "I was crying on my wife's shoulder. I was like, 'He's just the best man in the whole wide world.' I mean, no way could there be a cooler human being than that guy. And every time Malia lost it, I lost it.”

But Fallon wasn't the only one left crying over the Obamas this week. In an emotional bit, the first lady surprised her unsuspecting fans who were brought in to tape “Thank you cards," telling a portrait of Obama what her term meant to them.

One young African-American woman thanked the first lady for instilling confidence. "You have helped me and inspired me to work in my purpose every day," she told the painting of Obama. "I work to help women and underrepresented students get access to technology, education, and I love this work. And I'm good at this work, and I would love to work for you one day." The first lady then stepped out from behind the current.

"Really?" Obama asked, as the woman burst into happy tears.

Another woman told that the first lady, "Because of you, I know that my race does not define who I am or what I can accomplish." As Obama looked on from the wings, the African-American woman explained: "For years, you have shown our nation countless times, that through dignity, compassion, and respect, we can overcome any hardships."

A father of two thanked Obama for convincing his daughter to try the salad bar at her school. He told the portrait of the first lady that he allows his daughters to stay up late and watch her speeches "because the thread that runs through [her] speeches is kindness."

Suffice to say, all of the featured people were pretty pumped about the surprise.

“This was not what I was expecting,” one guest said, tearing up. “I was eating pizza bites yesterday in my bed, and now I’m meeting the First Lady. Like, what?!”

In another segment, Obama and Fallon wrote thank you notes. The comedian penned one to the first lady. “Thank you, Mrs. Obama, for being a strong, smart, independent woman — an activist, a style icon and a great dancer, and showing us all what it would look like if Beyoncé married a much nerdier Jay Z,” he said.

Obama's first note, which was to her husband, ended up being the sweetest note. "Thank you Barack," the first lady said aloud as she scribbled her note and soft, gentle "Thank You Note music" played in the background. "For proving you're not a lame duck, but my very own silver fox."

Stevie Wonder, Obama's favorite musician, closed out the show with a medley of "Isn't She Lovely" and "My Cherie Amour," which he changed the words to "My Michelle."