Let them call us rebels: We are all the heirs of Thomas Paine 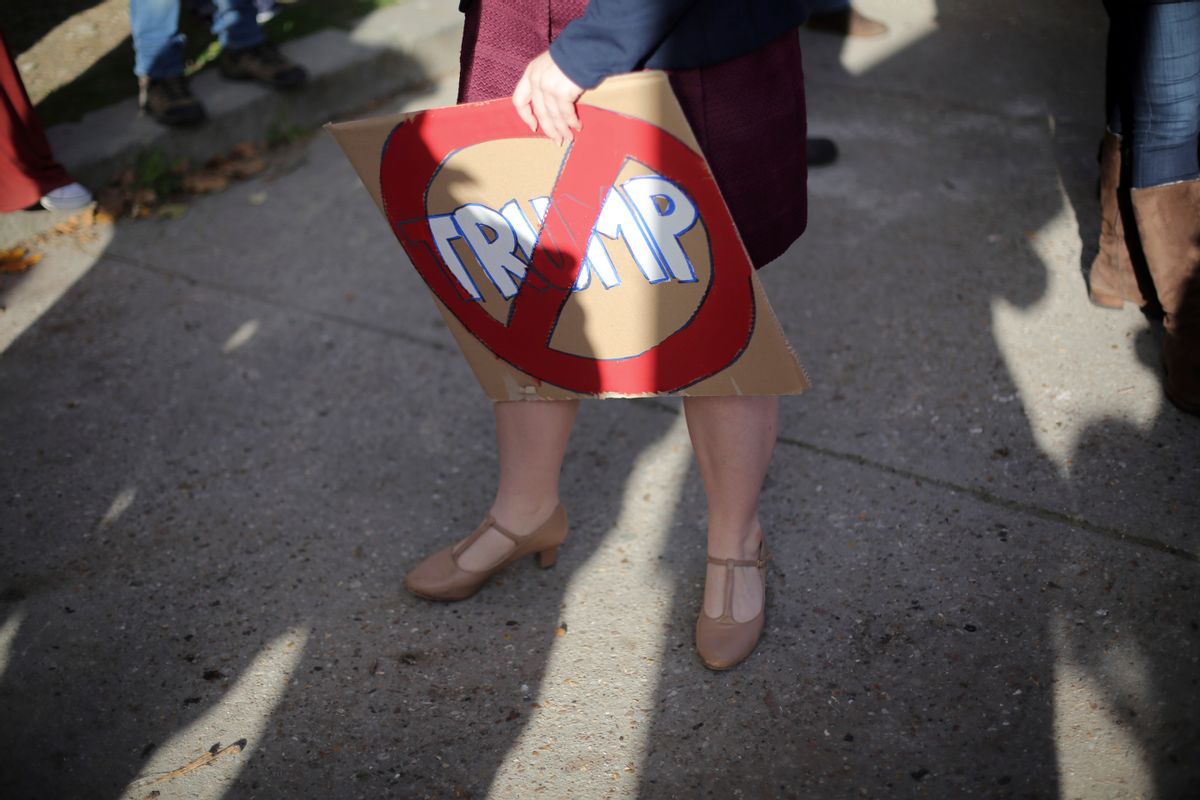 A woman holds a banner during a demonstration against US president-elect Donald Trump, in Paris, Saturday, Nov. 19, 2016. A few hundreds of critics of Trump have marched through Paris to express concern about his respect for human rights, women and minorities. (AP Photo/Thibault Camus) (AP)
--

In December 1776, during the darkest days of the Revolution, Thomas Paine wrote the first of his "American Crisis" papers. Following devastating defeats by British forces in Brooklyn and Manhattan, George Washington and the Continental Army were retreating across New Jersey to the Delaware River and Pennsylvania. Paine rode with them, determined to continue the fight and defiantly reaffirming his disgust for Great Britain’s King George III.

“Let them call me rebel and welcome,” Paine wrote, “I feel no concern from it; but I should suffer the misery of devils, were I to make a whore of my soul by swearing allegiance to one whose character is that of a sottish, stupid, stubborn, worthless, brutish man.” The greatest journalist of the Revolution knew how to call out the enemy.

Only 11 months earlier, Paine had published "Common Sense," a pamphlet of just 50 pages that would turn the world upside down. Calling on Americans to recognize that they were Americans not Britons, and that they were fighting not for British rights but for universal human rights, Paine — through words such as “The sun never shined on a cause of greater worth” and “The cause of America is in a great measure the cause of all mankind” — emboldened his fellow citizens-to-be to turn their colonial rebellion into a revolutionary war for independence and to make for themselves and their children a historically unprecedented democratic republic.

Now, however, it seemed America’s cause was to collapse on the frozen fields of Tory-dominated New Jersey. Encouraged by Gen. Washington himself, Paine began to write again. On a drumhead by campfire light he penned words that would reinvigorate the struggle and resound through the generations: “THESE are the times that try men’s souls. The summer soldier and the sunshine patriot will, in this crisis, shrink from the service of their country; but he that stands by it now, deserves the love and thanks of man and woman. Tyranny, like hell, is not easily conquered; yet we have this consolation with us, that the harder the conflict, the more glorious the triumph.”

As yet, we do not have our own pamphleteer for these soul-trying times. But we still have Thomas Paine’s ever-timely words. We do not yet have a writer who can as magnificently express our outrage that a man whose character Paine would deplore is about to become president after losing the popular ballot by nearly 3 million votes. We do not yet have a writer to encourage us to not only resist the ambitions of both the man who would be king and his Tory allies in Congress, but also to turn our outrage into a sustained struggle that will fulfill the promise of democracy. Nonetheless, we have the words that burned like fire in the breast of a man who believed that to be an American in his time meant being a radical.

Really, who better to rally us than this former corset maker, privateer and tax collector who came to America for a second chance in life and gave away all his royalties on a little book that was to become one of the biggest bestsellers in American history so that Washington’s army could be outfitted with mittens? Who better to call us out against a royal wannabe who lives in a palatial gilded tower named after himself, proudly boasts that he essentially pays no taxes (while refusing to release his tax returns) and after swearing to “drain the swamp,” proceeds to fill it with bottom feeders — a cohort of billionaires, ideologues and cronies he has privileged to dismantle the very government they loathe?

Indeed, who better to mobilize our opposition than the immigrant writer who first envisioned true American greatness and projected achieving it by creating a nation committed to freedom, equality and democracy? “We have it in our power to begin the world over again,” he wrote. “A situation, similar to the present, hath not happened since the days of Noah until now. The birthday of a new world is at hand, and a race of men, perhaps as numerous as all Europe contains, are to receive their portion of freedom from the events of a few months.”

Pick up Paine’s writings and prepare for Inauguration Day by immersing yourself in them. They remain as relevant today as when he wrote them, as Washington’s army shivered in the coldest of winters while waiting to once again do battle with the British and their mercenaries.

Carry his works with you. Give copies to friends and family. Read them aloud just as yeomen and farmers and artisans and merchants did in the fields, workshops and taverns of 1776. Drink deeply from his "Common Sense." Relish his attacks on kings and would-be monarchs. Delight in his belief that working people can govern themselves. Listen as he embraces America’s ethnic and religious diversity. And note well his plans for establishing an inclusive, prosperous and expansive American democracy.

Then, when you once again hear Donald Trump revealing, and reveling in, his own ignorance, denying the truth of things and lying practically every time he opens his mouth, recall Paine’s observation: “Men who look upon themselves born to reign, and others to obey, soon grow insolent; selected from the rest of mankind their minds are early poisoned by importance; and the world they act in differs so materially from the world at large, that they have but little opportunity of knowing its true interests, and when they succeed to the government are frequently the most ignorant and unfit of any throughout the dominions.”

Then take to heart Paine’s adage: “Of more worth is one honest man to society and in the sight of God, than all the crowned ruffians that ever lived.”

When Trump talks of banning Muslim immigration and compelling Muslims to register with the authorities, heed Paine’s warning that “Suspicion is the companion of mean souls, and the bane of all good society.” Recite determinedly these words: “For myself, I fully and conscientiously believe, that it is the will of the Almighty, that there should be a diversity of religious opinions among us.”

And when Trump announces he’s going to build walls, institute mass deportations and deny refuge to refugees, proclaim, as Thomas Paine did, “O ye that love mankind! Ye that dare oppose, not only the tyranny, but the tyrant, stand forth! Every spot of the world is overrun with oppression. Freedom hath been hunted round the globe. Asia, and Africa, have long expelled her. Europe regards her like a stranger, and England hath given her warning to depart. O! receive the fugitive, and prepare in time an asylum for mankind.”

As the Tories in Congress and state legislatures around the country move against the democratic achievements of generations — Social Security, the National Labor Relations Act, Medicare and Medicaid, the Affordable Care Act, the Civil Rights and Voting Rights Acts, consumer protections and a woman’s right to choose — stand up and pronounce the very words that Washington’s troops heard as they boarded longboats and crossed back over the icy Delaware to surprise and defeat the King’s troops at Trenton: “Let it be told to the future world, that in the depth of winter, when nothing but hope and virtue could survive, that the city and the country, alarmed at one common danger, came forth to meet and to repulse it.”

Let them call us rebels, for we are all the heirs of Thomas Paine.