Rep. Mike Pompeo is a Rapture-believing evangelical who sees "radical Islam" at work in small-town America 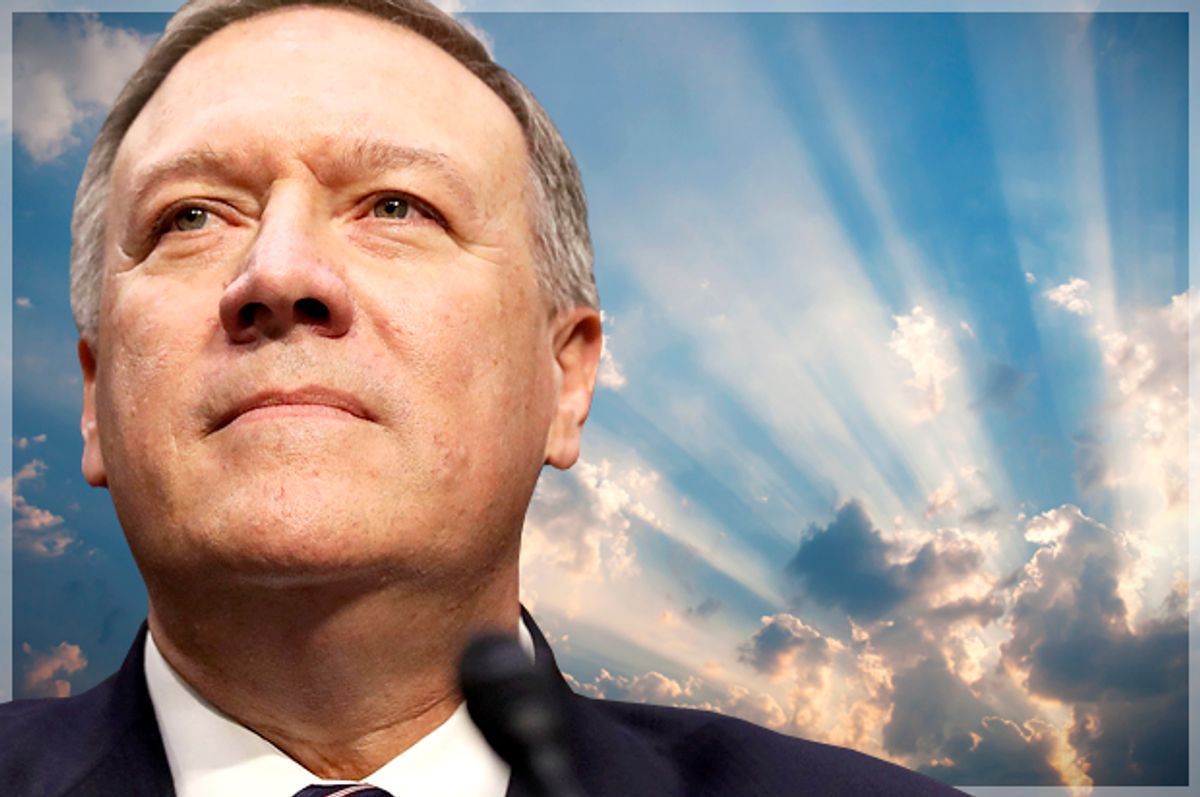 One of the many side stories that has been lost in the chaos of the Trump transition is the fact that far-right Islamophobe Frank Gaffney has been serving as a foreign policy adviser. Considering President-elect Donald Trump's views about Muslims, this isn't too surprising.

Trump's shallow understanding of the issue of Islamist extremism has obviously been gleaned from the right-wing fever swamps and Gaffney owns that end of the bog. (The Southern Poverty Law Center has posted a full Gaffney dossier.)

But with all the excitement over Trump's various mounting scandals, Gaffney's influence has flown under the radar, at least until this week. That's when one of his close associates went to Capitol Hill to testify at his CIA director confirmation hearing. That's right, Trump's nominee to run the Central Intelligence Agency, Rep. Mike Pompeo of Kansas, is a Gaffney guy.

Michelle Goldberg in Slate delved into Pompeo's ultra-conservative religious beliefs, which clearly inform his ideas about Islam. And it led him to an alliance with Gaffney, who is so extreme that he believes Grover Norquist is a member of the Muslim Brotherhood who has infiltrated the National Rifle Association. Gaffney is so far out there that he was banned from the Conservative Political Action Conference for insisting that its board was similarly tainted. According to Goldberg, Trump's CIA director nominee appears frequently on Pompeo's radio show:

Gaffney once called Pompeo “one of the most intelligent men I know in public life,” and the two see the world similarly. In February 2015, they spoke about President Obama’s use of the term “violent extremism” instead of “radical Islam,” a linguistic choice that some on the right see as a secret message of solidarity with jihad. Gaffney suggested that Obama might be conveying “an affinity” for ISIS’s cause, if not all its tactics: “the raising up of the Muslim Ummah, a grand rebalancing of America’s role in the world.” Pompeo relied, “Frank, every place you stare at the president’s policies and statements, you see what you just described . . .  every policy of this administration has treated America as if we are the problem and not the solution.”

While we have no word on Pompeo's position about Grover Norquist, Pompeo has told Gaffney on his show that he believes "there are organizations and networks here in the United States tied to radical Islam in deep and fundamental ways. They’re not just in places like Libya and Syria and Iraq, but in places like Coldwater, Kansas, and small towns all throughout America.”

Pompeo is a deeply conservative evangelical Christian who has said, “America had worshipped other Gods and called it multiculturalism. We’d endorsed perversion and called it an alternative lifestyle." He believes politics is “a never-ending struggle . . . until the rapture.”

He does not sound like the type of person one normally associates with the intelligence community. But this is Trump's administration, and Trump has promised to shake things up. An apocalyptic Islamophobic fanatic at the head of CIA will no doubt bring change to the agency.

Before the hearings began on Thursday, I had assumed that one of the main attractions for Trump of having Pompeo fill the job must have been his enthusiastic support for CIA torture. Pompeo was on the record after the Senate Select Intelligence Committee's  report as being fully supportive of the program:

"Our men and women who were tasked to keep us safe in the aftermath of 9/11 — our military and our intelligence warriors — are heroes, not pawns in some liberal game being played by the ACLU and Senator Feinstein,” Pompeo said in a statement on Dec. 9, 2014. “These men and women are not torturers, they are patriots. The programs being used were within the law, within the constitution, and conducted with the full knowledge [of] Senator Feinstein. If any individual did operate outside of the program’s legal framework, I would expect them to be prosecuted to the full extent of the law."

They were done under secret legal findings and were not within the Constitution, but that's another story. The fact is that Pompeo has clearly been an advocate of torture and his new boss, Donald Trump, is ecstatic about it, as his statements indicate:

“They asked me, What do you think about waterboarding, Mr. Trump?’ I said I love it. I love it, I think it’s great. And I said the only thing is, we should make it much tougher than waterboarding, and if you don’t think it works folks, you’re wrong."

Trump has also declared that his presidential orders to torture suspected terrorists would not be refused by those under him. When told that torture is illegal, he simply said he would change the law because we "have to get tougher."

Pompeo surprised the committee when he said he would not comply with an order to torture and that he couldn't imagine that Trump would ask him to do it. He insisted he would always comply with the law. Of course, he also has said the Bush administration's torture regime was legal, so that's not entirely reassuring. Still, Pompeo's testimony was widely interpreted as distancing him from Trump's stated position.

And Pompeo also seemed to come down hard on the Russian hacking allegations, which was again seen as diverting from the Trump party line.

But then it was pointed out that Pompeo had enthusiastically tweeted about the Democratic National Committee hacking, and he stumbled badly under questioning by Sen. Angus King of Maine. King asked Pompeo if he consider WikiLeaks a reliable source, and Pompeo said he did not. Then King inquired why Pompeo had cited WikiLeaks as "proof" that "the fix was in." Pompeo hemmed and hawed and finally said he'd have to go back and look at it. But that tweet shows that Pompeo has the temperament of a right-wing political activist, not the sober and mature temperament required for the CIA director job.

Like many of Trump's nominees, Pompeo has deviated just enough from the boss's craziest pronouncements and policies to give the impression that he will serve as a moderating force in the administration. This seems odd, considering Trump's domineering personality. It is more likely that Trump and his team are telling the nominees to say whatever they need to say to be confirmed.

Maybe Trump isn't listening to what his nominees say on the Hill or just doesn't care. Whatever the case, it doesn't matter. Trump will be the president and they will either do as he says or will have to resign. Judging from Pompeo's past comments and his apocalyptic worldview, if Trump orders actions against "radical Islamic terrorists" or demands the torturing of suspects, Pompeo will probably have no problem following orders. Indeed, he will likely be eager to do so.